Pink Sweat$ picks 10 of his all-time favourite tracks for Notion. Be prepared for a whole lotta throwbacks.

Philadelphia born singer-songwriter, Pink Sweat$, has always been an artist that channels the message of universal love via his music.

Favouring simple yet memorable genre-bending R&B ballads that favour just his voice and pared-back production, the artist’s moniker came out of a nickname he acquired for his favourite studio attire.

His latest effort, the 18-track ‘Pink Planet’ album has already racked up hundreds of millions of streams, despite only being released in February of this year. Noting just one feature, Kehlani, the stunning record is a testament to Pink’s star power and musical storytelling ability.

We asked Pink Sweat$ to pick 10 of his all-time favourite songs for this exclusive playlist. Featuring iconic artists such as Whitney Houston and Stevie Wonder, it’s sure to get you singing along. Turn it up!

"Outstanding" by The Gap Band

"I chose this because they are an iconic and timeless group and the track makes me feel good and uplifted."

"I Will Always Love You" by Whitney Houston

"For me I think that she’s and incredible vocalist and for me I want people to think of me as a vocalist like that, especially for my generation and era."

"Ain't No Sunshine" by Bill Withers

"Bill Withers is such a legend, I feel like a lot of people slept on Bill Withers. ‘Ain't No Sunshine’ is a happy one but also dark and I could just relate to the song."

"Caught up In the Rapture" by Anita Baker

"Anita has a really warm voice and for me there are certain songs where I wanted to capture that warm tone, not necessarily how she sang it but the feeling and the warmth."

"A Song For You" by Donny Hathaway

"This song just feels me really well. When he sings it’s just a feeling, even if you don’t hear every lyric you can just feel it and that’s what I want people to get from my album."

"You Can't Hurry Love" by The Supremes

"I always found this song very intriguing. The production and the lyrics don’t really go together. It’s an upbeat song but the lyrics are saying ‘you can’t hurry love’, it’s giving advice in the third person. It’s a cool and well written song."

"I have Nothing" by Whitney Houston

"I love this song! There’s no specific reason, I just genuinely like this song a lot, it’s a beautiful record."

"This song makes me think about my family and where I come from, my background and being in church."

"This song has a lot of Philly influence in it and I always wanted to study the greats and how the groove was."

"Send One Your Love" by Stevie Wonder

"Over the last 2 years I’ve been jumping into Stevie Wonder a lot. I’ve released how long he’s been doing this and how he really transcends time with his story telling and ability to paint a picture. It’s amazing." 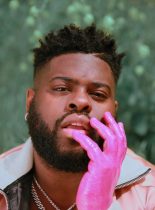