PC Music's Planet 1999 pick 10Trax that have had the biggest impact on them artistically.

Self-describing their sound as “bubble-gaze”, Planet 1999 recently released the EP, ‘this is our music ♫’, a follow-up to their debut project, ‘Devotion’. The new EP sees a shift in sonics for the band, who were previously known for their early 90s shoegaze and dream-pop sound. Following their motto – EVERYTHING IS ABOUT EMOTION – the trio channel expansive, Gameboy-reminiscent hyperreal sounds through polyphonic keys.

Since being discovered by A. G. Cook and Charli XCX, Planet 1999 members caro♡, Charles and Alex – who live across London and Paris – have go on to produce music for Nasty Cherry in the Charli XCX-helmed Netflix series I’m with the Band: Nasty Cherry, and work with XCX on her eponymous ‘Charli’ record, alongside Clairo and Yaeji.

Dive into the atmosphere of Planet 1999 as they select 10Trax that have inspired and impacted them artistically, from Kate Bush to Mariah Carey and Cocteau Twins.

"Triad God and Palmistry’s minimalistic production have been a huge influence for us. The tracks are always really simple but every sound makes a difference."

"Soon" by My Bloody Valentine

"The perfect shoegaze pop song and with no reverb."

"The way this remix track is focused only on the vocals and the pads had a big impact on us."

"The sound and flow of Charli on this track are incredible. The way the vocals are side chain through the whole song is crazy. "

"Beautiful track with vocals so overmixed."

"D’Eon is incredible and very versatile. The scope of his work is actually insane."

"Through The Rain" by Mariah Carey

"Mariah has been a huge inspiration for us and on our understanding of what a pop song is."

"This Woman's Work" by Kate Bush

"There’s so much softness and strength at the same time, true vulnerability. Also, the freedom in her production and her melodies is truly inspiring."

"His lyrics are so poetic and on point, the sounds of the words and the images are always perfect."

"Listening to Daft Punk as a kid marked us forever. This teenage 4ever feeling, and the punk twist to it." 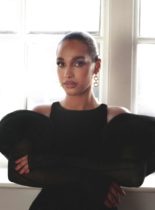