Stalk Ashley selects 10Trax that she's currently got on repeat.

Jamaican artist Stalk Ashley is proving herself to be a key one to watch with the recent release of her hotly anticipated debut EP ‘EXcuses Part 1’. It’s the first of 3 instalments; Part 2 and Part 3 are slated for release in January and February sequentially.

First appearing on the scene when she was hand-picked by none other than Stormzy to perform alongside him on BBC1’s Live Lounge, Ashley has since been included in this year’s BBC 1Xtra’s Hot List alongside the likes of Pa Salieu, BERWYN and Ivorian Doll.

Speaking on the new EP, Ashley said: “‘EXcuses’ is me walking listeners through my life as an adolescent blossoming into a young woman. It shows young girls that we all do go through shit but it’s the end result that matters”.

To celebrate the release of the EP, Stalk Ashley picks 10Trax that she’s got on repeat, from Post Malone and Drake to SZA and more. Turn it up!

"The vocals on this one is just chef's kiss".

"In Too Deep (feat. Kiana Lede)" by Jacob Collier

"I love everything about this song & the feeling it encapsulates. The talent Jacob has is amazing".

"This beat just moves me. I really want to party when I hear it".

"This song was such fun to make, it’s so honest and it speaks to my soul to this day".

"This song had me in a chokehold for months. They both are two great artists and I’m happy I got to experience them collaborating".

"Russ is an amazing artiste, to think he produced and writes these bangers is amazing to me".

"Whenever I play this song when I’m getting ready for a night out, just know the night is going to be lit

"I love Post Malone, there’s just something about his voice that I’ve been stuck on since "White Iverson"".

"This song is straight up a MOOD".

"This song speaks volumes about real life emotions that I’ve been through, ya girl was down bad". 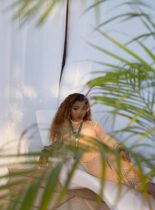 Rising Jamaican R&B artist Stalk Ashley talks about her musical journey and what we can expect next from her.