There’s a new wave in pop and Sigrid is riding on the crest of it. Since signing with Island Records in 2016, the 22-year-old Norwegian has springboarded from Glastonbury to Coachella, Later…with Jools Holland to the Graham Norton Show, picking up the coveted BBC Sound of 2018 award along the way. Propelled by the lively force of tracks such as the Annie-Mac-certified ‘Strangers’ and the more recent ‘Sucker Punch’, Sigrid’s appeal lies in a sense of carefree independence that can only be found in an artist who has succeeded in liberating herself from the external pressures of the industry.

Sucker Punch, Sigrid’s debut album, is a sonic kaleidoscope of electric twangs, frank lyrics and vibrant melodies that will be released in March. But before that, a 30-minute call from Cologne to fill us in on the journey so far. 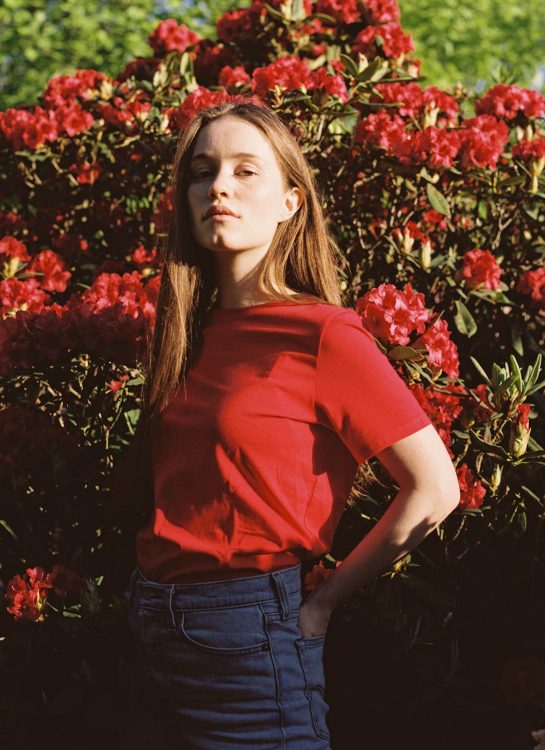 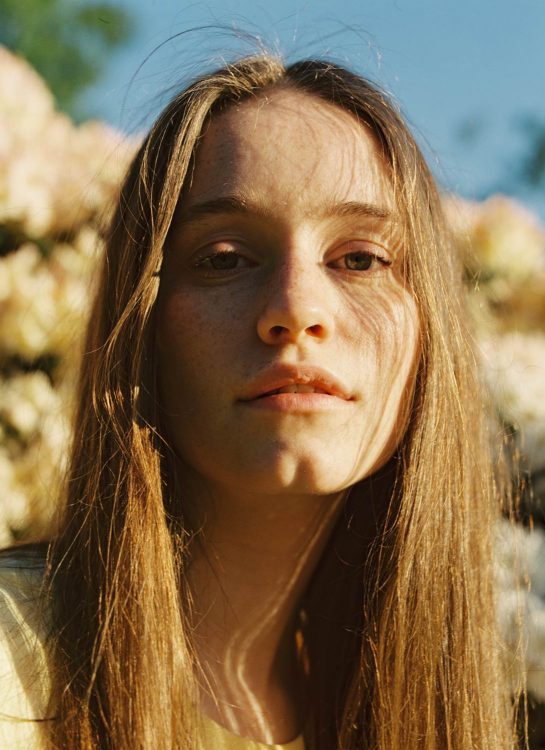 Things have moved so quickly for you since you won BBC Sound of 2018. How do you keep up with that? Do you ever have time to really appreciate the moments along the way?

Good question. I don’t know. Sometimes I just forget about my job. I’m just like, ‘Yeah, I’m just going to play a gig today, and then I’ll hang out with the band,” and it’s all pretty chill. And then sometimes I’m like, “What the hell is actually going on?” I’m trying to get better at actually seeing the city I’m in to make more sense of everything.

So would you say that you’re working on having more ‘me time’?

I think I’ve always been really into ‘me time’. Honestly, yesterday I just stayed in and I watched Netflix the whole night. It was amazing.

What did you watch?

Well I’ve been watching this new British series… Sex Education.  Do you know it?

Yes! I loved it

It’s so damn funny. I love the humour.

And now you’re about to release your first album. What has the process been like behind the finished product?

I guess it’s been kind of a long process. It’s been really fun. I’ve written, co-written and co-arranged all of the songs on the album. So I’ve had a small team of people who I’ve been working very closely with. A lot of it has been made in my hometown actually. It’s been great and I love all of the songs. I’m really excited to share it with people, so we’ll have to see what people think!

How collaborative is your writing process? Is it ever hard to give up some of the ownership and responsibility you have within that small team?

Well, I would say that I’m a very opinionated person! I’m 100% involved with everything in my career and I’m not one to let things go. Of course writing with other people is a lot of fun, but it’s very important to me to be comfortable in a writing session and to feel like I can share stuff. When we make a song, we go into the studio, have some good food, sit down by the piano and just write and sing together.

How do you think your sound has evolved since the first tracks you released?

I still think I write the same way in the sense that I want every song to work well on just the piano. It’s really important to me that everything works as an acoustic song. The people who have written songs like that have always been my musical heroes – Neil Young, Joni Mitchell, Adele, Ellie Goulding – so that’s really important to me. But production wise, the album is quite eclectic. It’s a pop album album, but I think I’m discovering different sub-genres within the pop genre. There are ballads, there are songs about friendship, there are songs about having a crush, there are songs about business… There’s even a song inspired by Studio Ghibli! It’s basically a summary of the past few years. It’s like a time capsule!

That’s a very good way of putting it. It’s definitely an eclectic album. One of the things I actually wanted to talk to you about is how unique all the songs are from one another. Going forward, are you ever worried about pressure to feel like you’re constantly developing

I’m very ambitious and I’m in this for the long run. I love music and I would like to do it for as long as possible. I’m super lucky to even to be doing it now. But I suppose in terms of the creative side of it, I don’t know what type of music I’ll be making for the next record, but I find that very intriguing. I don’t want to set any limits on myself, but I think that no matter what kind of music I make in the future, pop will always be the genre that’s closest to my heart. That’s the music I love the most. I’m glad that you’ve said that all the songs are unique, because that was actually my plan! All the songs mean a lot to me. 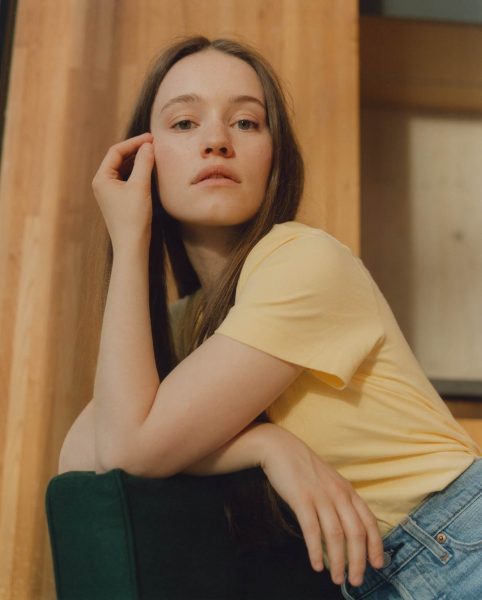 What do you think is the secret to writing a good pop song?

Daring to be a bit honest and trying to see a situation from a different point of view. I use lyrics to open up the different perspectives of one story.

How do you know when you’re on to something good?

It’s probably when we’ve finished a session and I open up my email and listen to it immediately. Or when I wake up the day after and I’m still singing the tune!

You’ve spoken about doing a lot of writing in your hometown. What’s the best environment for making music?

Not being in the city and being far away from distractions is best. Being close to nature is also great. It’s quite distracting because it’s so beautiful, but it’s distracting in a good way. If you need a break or you need to think about something in a different way, you just go out and get a breath of fresh air! I find it hard to work in cities because there’s so much to do there. I like to take myself away and hang out in the countryside. That’s why I love working in Ocean Sound Recordings in my hometown. It’s very comfortable and I have a lot of history there because it’s where I grew up. It makes me think about things in a different way when I’m back home. And it’s always so nice to see my parents.

Tell me about growing up in Norway, is it as beautiful as everyone says it is?

I grew up in a little city with about 50,000 inhabitants. I think the main difference from growing up somewhere like London is that we didn’t really have a music industry. I had a piano teacher and I had a vocal teacher, but we didn’t really talk about the music industry or a possible career in music. It was all about having fun with it. I’m very lucky that I had such good teachers. They didn’t push me into any genres, they just gave me a good base of knowledge so I could work out what I wanted to do.

My childhood was a lot of skiing and lot of hiking too. I did dance, I did theatre and of course I went to school. I didn’t grow up thinking, “I’m going to be a popstar.” It was more chill.

One of my favourite songs from the album is ‘Don’t Kill my Vibe’. You wrote it about being patronised in the studio. Can you tell me about that experience?

I was in a writing session that was, let’s say, difficult. I felt like my opinions weren’t respected and there were a few comments that I didn’t really like. At the end I wondered why they had even invited me to the session if they weren’t interested in my opinion as an artist. I didn’t say anything and that annoyed me even more because I thought I was the type of person to always let people know when things weren’t ok.

I originally didn’t plan on telling the story behind that song. I didn’t want to out anyone or be unnecessarily mean because, of course, it is a ‘fuck you’ song. But then someone asked me if it was about an ex-boyfriend, and I said, “No! It’s not!” Then I felt like I needed to tell the story.

What’s your advice for other young women who are made to feel small in their field?

I think you should speak up because you’ll feel a lot better if you do. It’s also important to remember that you’re not the problem, it’s them. If they don’t respect you then that’s on them. Everyone has a voice and it’s important to use it. And also as an artist, it’s so important to love everything you put out. Don’t put out things you’re not comfortable with.

That kind of approach is definitely very apparent throughout the album. There’s a real sense of frankness and honesty in all of your songs. Is that something that’s particularly important to you?

Yeah. Every time I’m in the studio I’m like, “Can I say this? Can I say that?” It all comes back to that thing of being comfortable with what you’re saying. Everything that I put out there needs to be honest and realistic.

Has anyone tried to mould you into something that you’re not along the way?

Yeah, that’s happened. But not my team, they’re amazing. We figured out early on that I’m pretty opinionated and I know what I’m comfortable with. They’re so supportive and because of them I’m really comfortable with what I’m doing now. Of course there have been incidents where I’ve been pushed a bit, but that’s when it’s been important for me to say no.

Have you got a favourite song from the album?

That’s a hard one! At the moment it’s maybe ‘Sight of You’, because that one is about my band and the friendship we have. It’s also about the festival season because we spend so much time doing festivals

Yeah, you’ve had your fair share of pretty big gigs. What’s been the most incredible so far?

One festival we did, Electric Picnic in Ireland, was one of the craziest moments I’ve had. The crowd was insane and I felt like we were all leading the show together. It wasn’t just us performing. It was like an out-of-body-experience! I just felt incredibly lucky in that moment. Coachella and Glastonbury were also amazing. Those were things I’ve been dreaming of doing since I started writing when I was 16. Meeting the Royal Family was also really cool! All those moments are so surreal, but it’s also the little things that I love, like being on a tour bus with the band.

What do you and your band like to do when you’re not working?

We eat. A lot! We’re a big sushi band. We have a really nice dinner tradition. It reminds me a lot of home because having meals together is a big thing in my family.

Lastly, tell me what you’re most excited about that you’ve got coming up in the next few months?

There’s definitely stuff that I can’t tell you about yet! But one thing that I can say is the George Ezra tour, that’s going to be really cool. Also the festival season again – I love festivals! 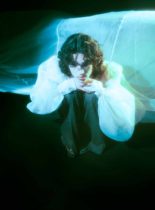 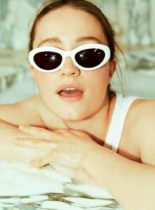 The Making of “Mirror” with Sigrid 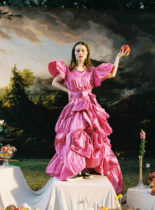 We get an exclusive look behind the scenes of Sigrid’s music video for her new single “Mirror” as the Norwegian singer makes a momentous return.