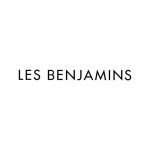 Move over Mary-Kate and Ashley, SimiHaze are the new trend setting twins preaching the glow up gospel.

Sama and Haya Khadra are the two halves that make up sister sister duo and global instagram phenomenon, SimiHaze. Simi, with her primary colour yellow nails, and Haze with her signature dip dyed hair, know how to throw a look. Fresh from hanging out at Paris Men’s Fashion Week, the positivity bouncing off of the duo is palpable. Simihaze come on like a mix between Lara Croft and Leeloo – with her bobbed hair and Jean Paul Gaultier designed future fashion outfits in Luc Besson’s iconic sci-fi movie The Fifth Element – only if they’d decided to team up and become badass international ‘it’ girls.

On their joint Instagram account @simihaze, where over 780k followers hang on their every outfit, the duo share their globe trotting twin set lifestyle. One minute you’ll find them hanging with Luka Sabbat and Yoon Ambush, then they’re snapchatting with their close friends Kendall Jenner and Bella Hadid. Simihaze are not your everyday influencers though, their feed isn’t packed with the typical endorsement posts most social media celebs get caught up in. Instead they’re 360 degree creatives who graduated in the top two-percent of their class at the University of Southern California and are adopters of the Paris Hilton business model, in that they’re building their own multifaceted Simihaze empire brick by glamorous brick.

Born in Saudi Arabia and of Palestinian descent, Simihaze primarily grew up in London and lived in Dubai during high school before relocating to Los Angeles to study FIne Art. The twins are legit models and muses, having been tapped for Cartier campaigns and appeared as the faces of Virgil Abloh’s Off-White eyewear campaign. They’re DJs who go from playing the biggest parties at the Cannes Film Festival, to the annual MoMa garden party in New York (where they followed a live set by St. Vincent), to spinning tunes at Coachella. The duo are adding ‘musicians’ to their growing list of talents, as we they talk exclusively to Notion about their debut EP, their global flavour and crying at fashion shows. 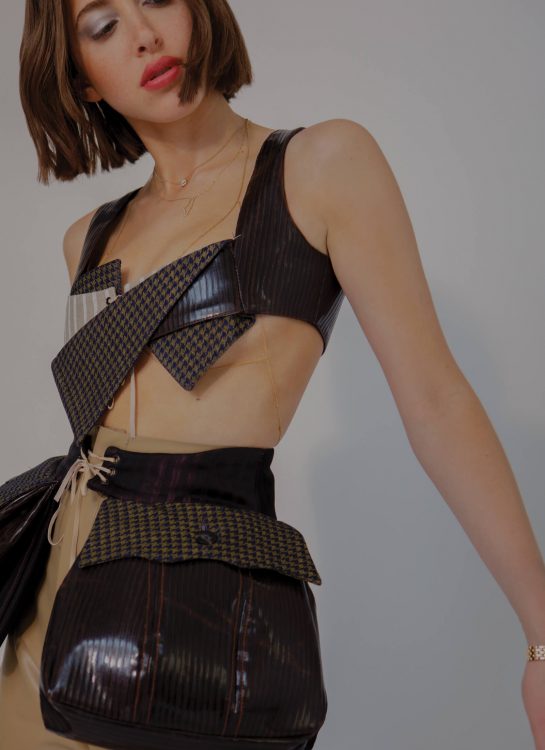 You’re both so global and constantly on the move but would you say SimiHaze began in LA?

Haze: The lifestyle you get there, you don’t get it anywhere else. It’s hard when you first move out there to create your life just because it’s so spread out but once you do it’s the best city in the world.

Haze: I feel like we always had one. We never think of it like a business thing, it’s always been like — we always have people saying we should like post every day or do this or tag this but we’re so anti that. At this point our manager is just like ‘let them do whatever they want’. It’s just so natural. Sometimes we won’t post for weeks and sometimes we’ll post five times a day. Whatever we feel.

Simi: It’s mostly just for us to keep track of our adventures.

Posting like that seems more natural rather than posing with some t-shirt you’re trying to get everyone to buy. Do you see yourself as artists then?

Haze: I definitely see myself as an artist. We’ve always been super creative and done art, music and fashion. Everything creative, we just have the taste and eye for it.

Simi: Over the years it just kind of grew. Our eye for fashion, our eye for art, our ear for music…

Haze: We have such a global perspective on everything. Whether it’s like an idea or like an art piece or fashion, because we travelled so much growing up we can really understand things from a 360 perspective and it helps us make art that encompasses 360 degrees. That’s what we want our music to sound like. We want it to sound 360.

You’re imminently dropping your debut EP, what can you tell us about it?

Simi: We’ve been working on our music for two years now. We’re very natural with our process… I don’t like to stick to a plan because what happens is usually better than a plan or what’s in my head.

What’s been your process with writing these EP tracks?

Simi: We’ve been working with different producers, co-producing [the tracks].

Haze: We’ve always had people tell us we should do this or that… But it’s always been such a big thing for us to be authentic. Maybe it’s coming out now because we had to experience the last two years to get here. So everything is coming at the right time. The music kind of comes with our lifestyle, it’s like a soundtrack to our lifestyle. We have very active, fun lives. We love to dance, we have a big group of close friends and we just love music and take inspiration from all genres. We love sharing music and just living in it. I think the music we are putting out is reflective of that. 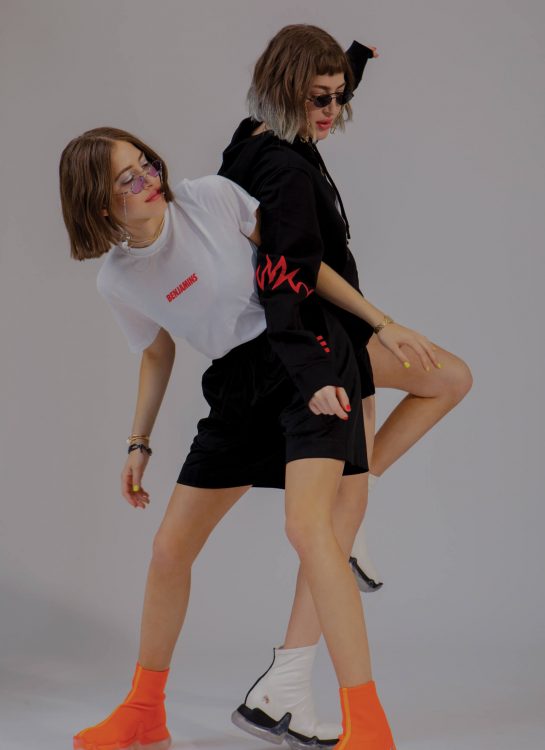 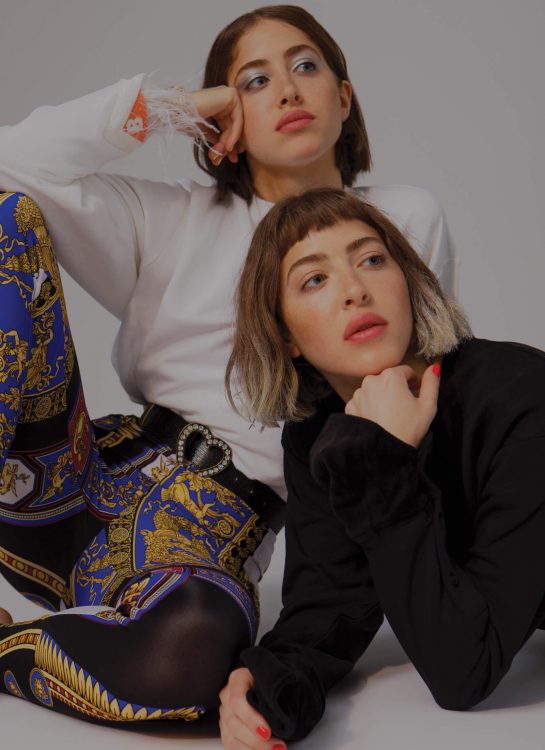 You talk about authenticity. Is that something that across the board is important to you?

Haze: It’s the most important thing! In our music we’ve been approached by so many people in two years who’ve heard one song we did and they’ve just said ‘the last thing we care about is the music you guys are a package already we could sell you in two seconds, the music is like the last thing we’re worried about’ and it’s like —

Simi: THE MUSIC IS EVERYTHING. That’s the one thing I care about. I care about what I put out under my name because we influence a lot of like “influencers”. I know that because of my friends. I’m aware of the eye that’s kind of on us and the influence that we have in culture. I don’t take that for granted so I don’t ever want to put something out that’s not reflective of us.

You say “we” and “us” a lot and obviously you’re sisters and a duo. Do you feel like one person ever? How is it working together the whole time?

Simi: It’s fun cos we take on different roles depending on what it is, or even depending on the day. We fill in for each other where it needs to be filled in.

Haze: It works out for some reason!

Haze: I feel like we haven’t figured anything out yet, we just do it! I never go in knowing exactly what I’m doing: in music, in art, in fashion, in anything.

Simi: I like that, that way you allow for openness.

You first started going to fashion week when you were fourteen. Was that what sparked your initial interest in that world?

Haze: My mum has a store, that’s how we first started going to fashion week, helping her as a buyer. We’d go and help her go to the shows and showrooms when she didn’t have time to go to the shows. We were like ‘oh yeah, we’ll help, we’ll take that invite!’

Simi: We were like fourteen, social media wasn’t a thing yet, we were such fans of fashion we knew all the names of the models and designers, It wasn’t like now — now everyone has personas, but before it wasn’t like that. It was just fun, we grew up in fashion without the social media. There were no street style photographers, no nothing. We were shocked when the few street style photographers took our picture, we were like what are you doing?! Why are you taking our picture?!

Haze: It’s cool because it’s changed so much and I feel like it’s a cycle. The evolution of fashion was so pumped by the internet. So around when we were 17/18….

That was the rise of blogs really wasn’t it?

Haze: Yes and now you see way less street style photographers cos no one looks at blogs anymore! It’s coming back around, so I’m excited to see what happens on the other side. It’s interesting. I feel like we’re at the kind of pinnacle of the Internet, where we’re almost kind of sick of the Internet.

To see the full feature, download the latest issue!