It’s fair to say that the past few weeks have been career-defining for the Camberwell based sextet, Sports Team. In a battle of Oasis v Blur, or rather Sports Team v Lady Gaga, the Londoners were narrowly pipped to the #1 post on the Official Albums Chart by the American icon with the release of their herculean debut Deep Down Happy. Plus, the band have just announced their biggest UK tour to date and they’re itching to get back at it.

Fusing the charisma of Pulp with the raw drive of Iggy and The Stooges, Sports Team have heralded a renewed and revived indie guitar ethos fit for 2020. Their gobby, fun-loving approach to their music and their lives has catalysed an ever-growing community of passionately engaged young fans – known as the STC (Sports Team Community) – that they keep engaged with via WhatsApp. 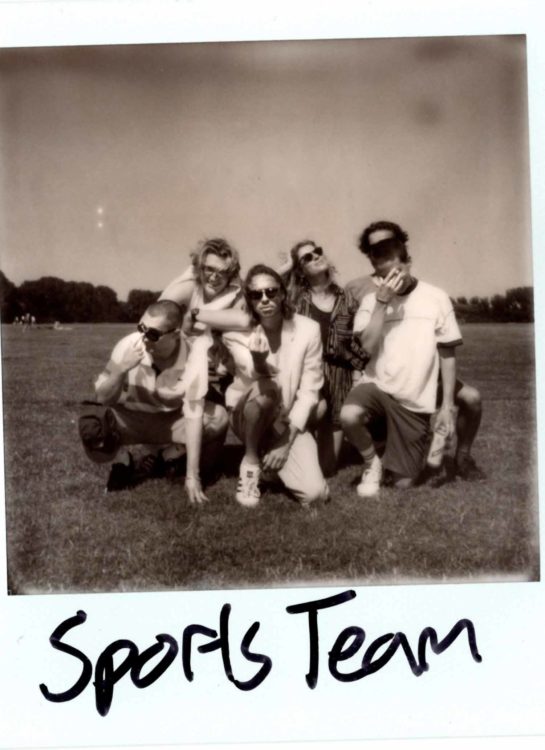 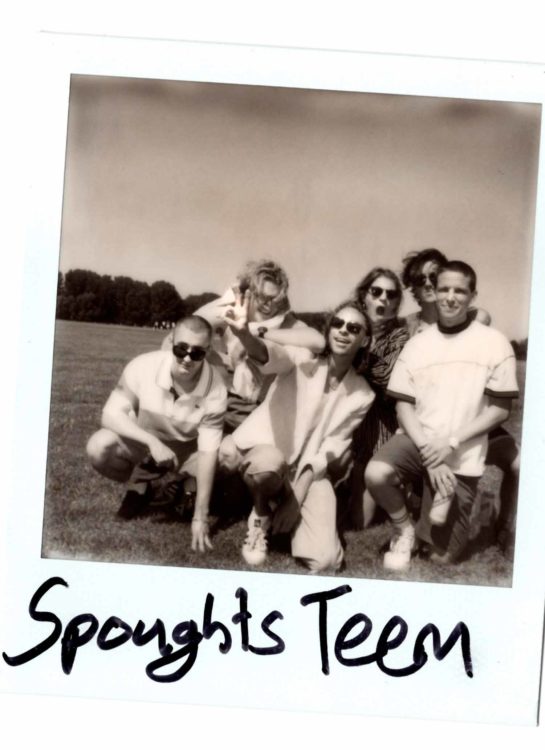 Yet, after recently chatting with frontman Alex Rice, it’s clear that the band have yet to be swayed by the rapidity of their recent successes. Instead, Sports Team are a gang of mates made up of six uniquely different individuals in their mid-twenties who, just like the rest of us, are trying to realise their place in the world a little bit more. The group is formed of lead vocalist Alex Rice, rhythm guitarist and vocalist Rob Knaggs, lead guitarist Henry Young, bassist Oli Dewdney, drummer Al Greenwood, and keyboardist Ben Mack.

It is this pure sense of spirit and love for what they’re doing that seeps through the pores of the band’s debut album and their raucous live shows. They’ve branded themselves as the best live band in the world at the moment and when the time comes for us all to safely return to our beloved local music venues, the band will be keen to retain that title.

We caught up with Alex from Sports Team to chat about lockdown, being signed to a major label and, most importantly, the bookies. 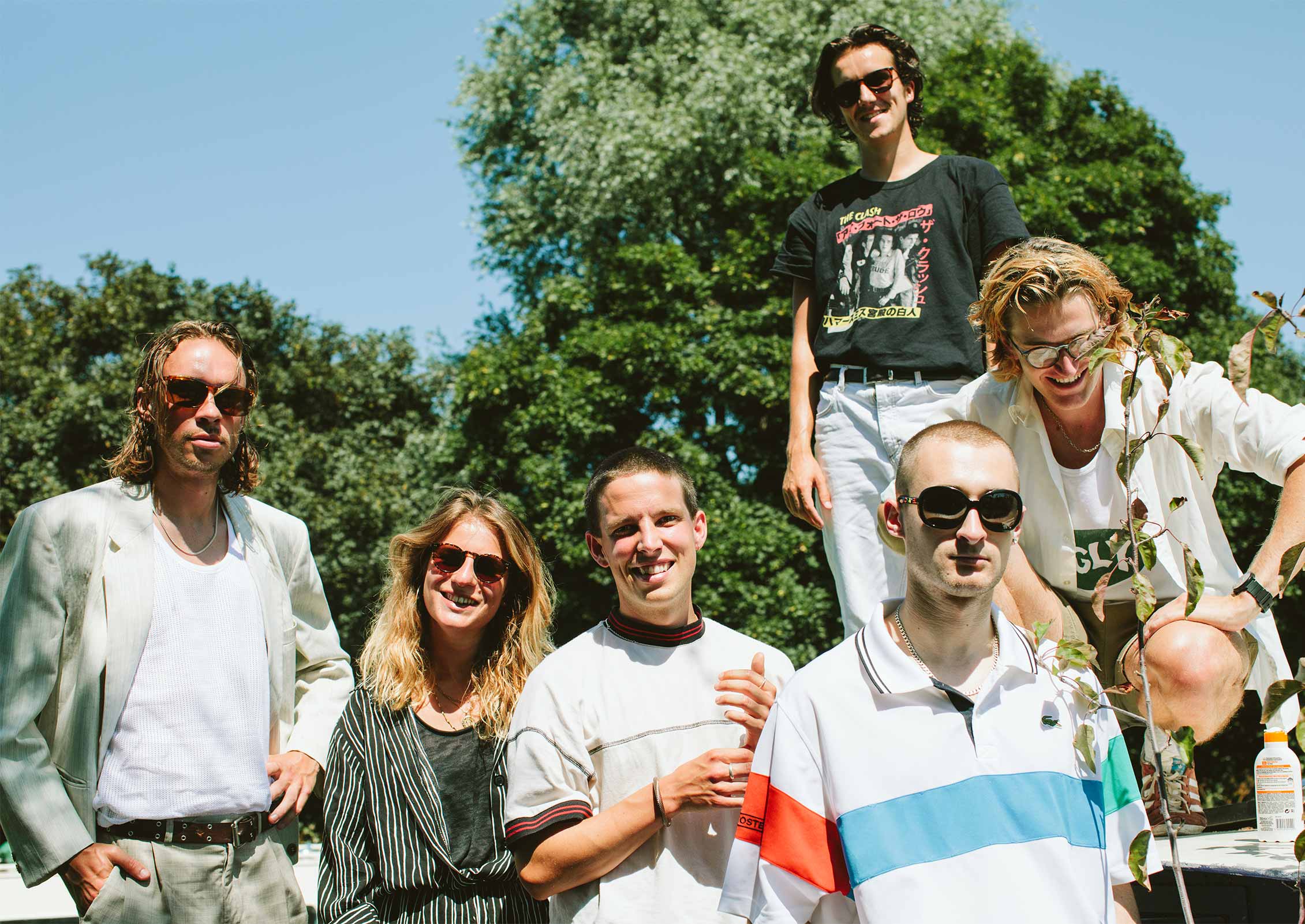 How have you been keeping yourselves entertained during lockdown?

When lockdown came in, we were quite lucky in a sense that we were already in the studio so we’ve got a lot of album two done now and we want to release it quick. We’re still in the house in Camberwell together which, you know, has its ups and downs but we’re all together and working on stuff. We’ve been going on the Black Lives Matter protests as well which has been powerful and we’re trying to work out ways we can support that going forward as well.

Is the title of your debut album, Deep Down Happy, a nod to your fun-loving personality as a band?

It’s from a book called The People of Providence (Tony Parker). It started off as just a turn of phrase but now I think it feels kind of like making an assessment of whether we have found this model for joy in our lives, you know. In this more kind of questioning vain, I think it’s us realising our place in the world a little bit more. 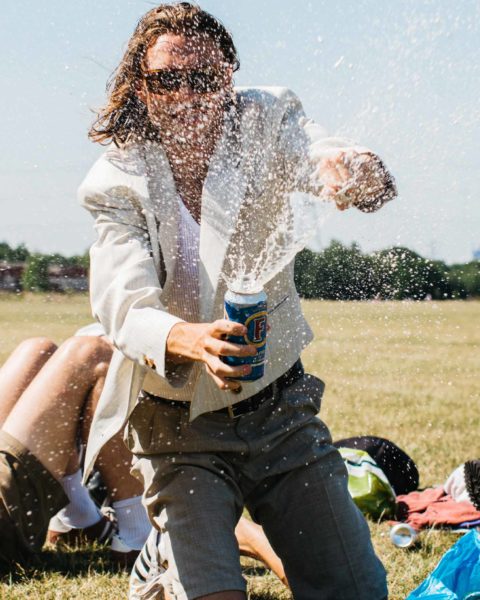 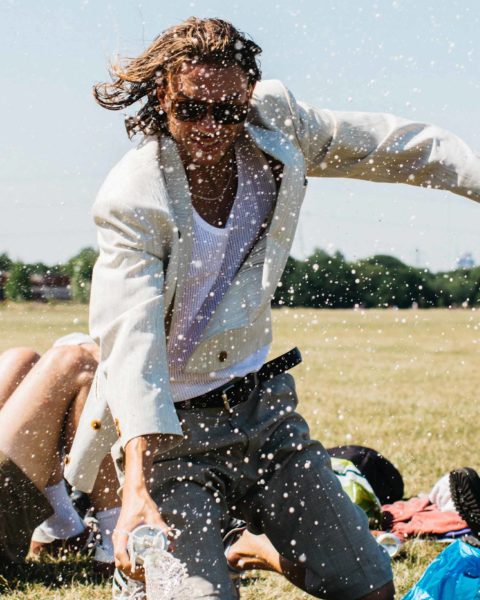 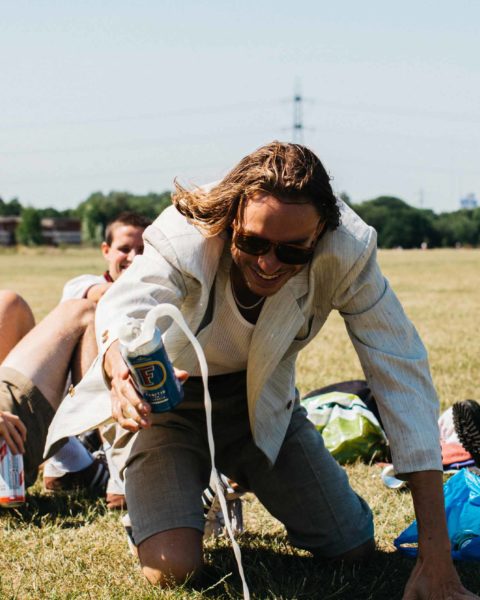 What was the creative process behind writing/recording the album?

We had 160 live dates last year so it was always like coming back off a ferry at around four in the morning or whatever it was, dart in the studio, try to get a track down, and then flitting off that evening. A lot of the songs were worked up by playing them live. You start to realise by playing every night the parts of songs that have genuine emotional impact on people and then you can go back in the studio the next day and emphasise those bits. It all feels linked by our live performances; all we really like doing is playing live. The studio bit for me is arghh… I don’t really like getting in there and tinkering with a pedal, you know.

Can you tell me the story behind the bet you placed three years ago which came so close to coming through with the release of Deep Down Happy?

Haha yeah, it was when we were working on our first EP, Winter Nets, and we all just had normal jobs in London. Around this time we thought “we should probably get some merch… bands have merch,” you know. So, we only sold nine t-shirts and put in a 50p bet from Coral with each t-shirt that had odds on us having a #1 album by January 2020 written on the slip (the prediction was only six months out and a #2 spot was achieved in the week of the debut’s release). We got in touch with Coral actually, and obviously it was a little out but they said they’d honour it and donate the money to charity so it’s going to the Music Venues Trust. 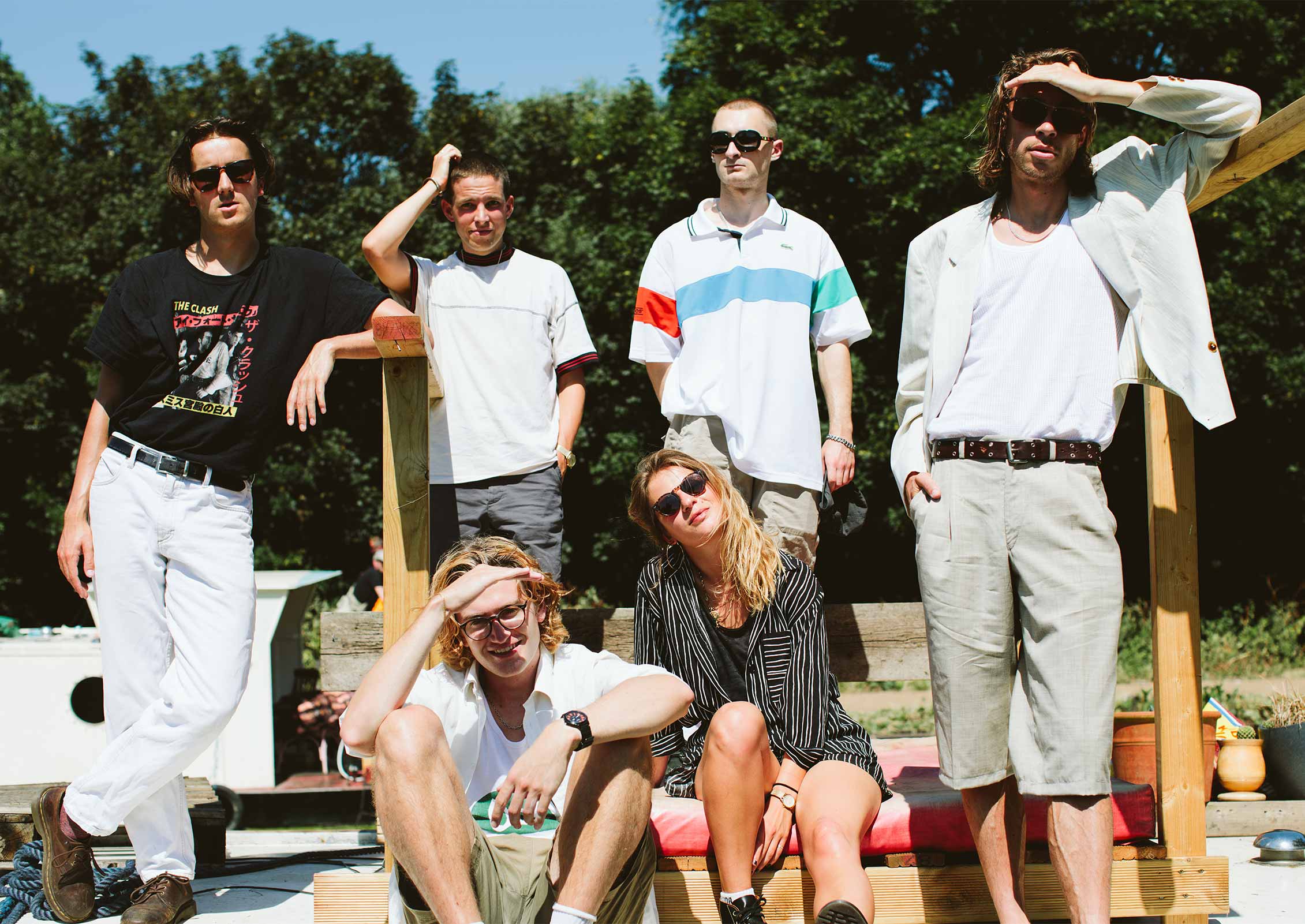 You released your debut album on a major record label. What has the process of working with a major been like for Sports Team?

You tend to hear these sob stories of people that get dropped but I genuinely think they had such low ambitions for us, you know. One of the first things they said to us was just like, “we’ve got no idea how to break a guitar band… no majors are breaking guitar bands at all in the UK.” But they encouraged us to just kind of build it organically. They’d seen our live shows, they’d seen what happened at them and the community that was building around that and they were like “just keep building around that.” We see them all the time so it’s easier to know the people and where the ideas come from as opposed to a formulaic way which you might get if you’re not in there chatting to people about music – we all just love chatting about music really. But yeah, it’s been brilliant, we’ve loved it.

You’ve branded yourselves as the best live band in the world at the moment. Do you hope to retain that title when you set out on your recently announced UK tour in 2021?

I think so, yeah! I think the appeal of it comes from being six completely different people on stage and people can be like “that looks like the strange gang of mates I’ve got as well.” We’re certainly not built around musicianship or anything like that. It’s more about spirit and how much energy we can pour into it. But it’s obviously down to the crowd as well, we’ve got the best crowd in the world by an absolute mile. They’re all willing to make a day of it; they’re not people that just get the train in, turn up, see one of the supports and you’re out after you’ve bought a few £6 Carlings. It feels like a genuine community… they rip the piss out of us half the time, to be honest. 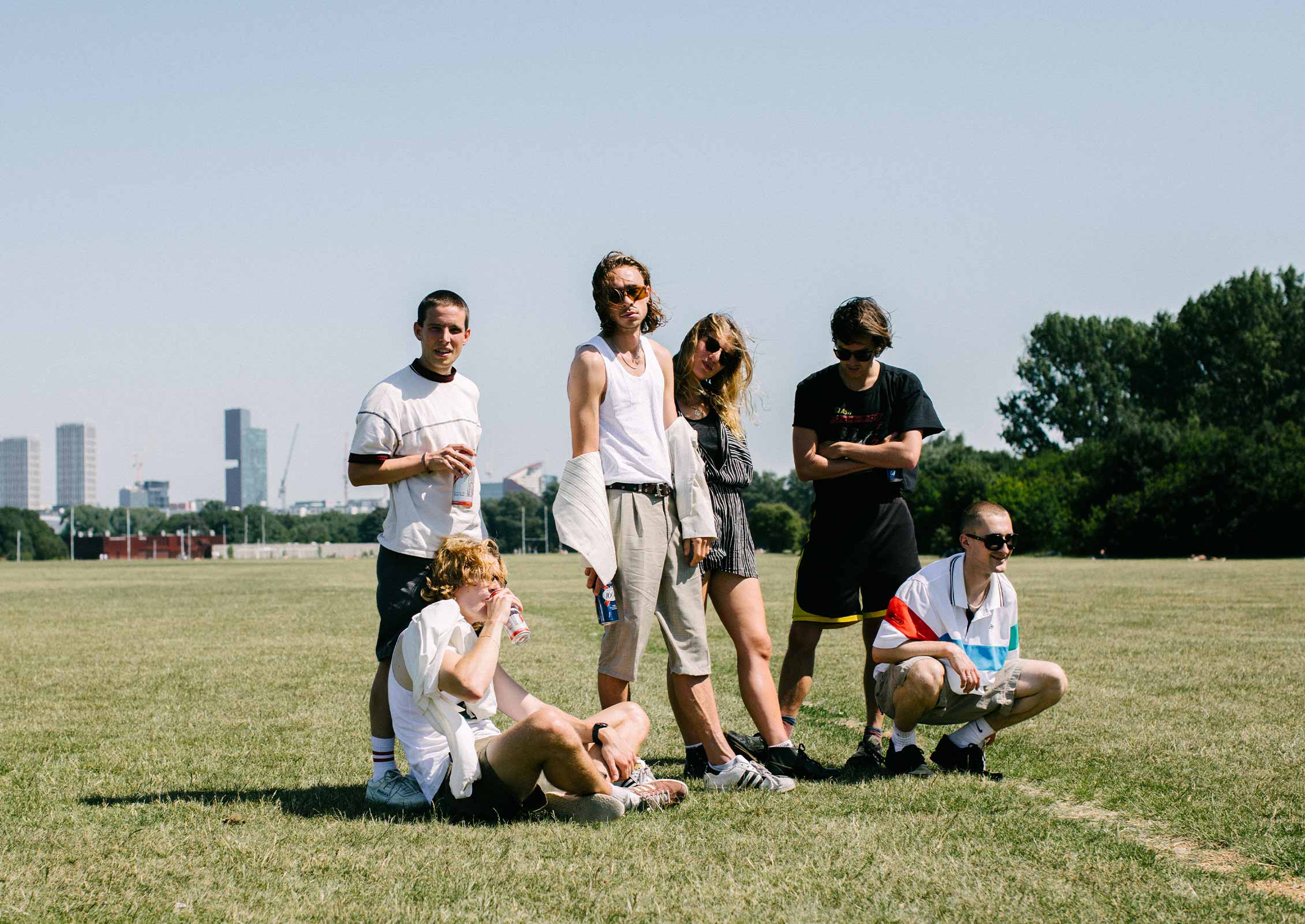 Your drummer Al has spoken proudly of the fact that you’ve attracted a large female fanbase with your music. Is it important for yourselves as a band that live music spaces (when we can all return to them again) feel safe and inclusive when people come to see you perform?

Absolutely. We’ve done various such things such as put out flyers as well as having a Girls Against rep present for various gigs to make clear where we stand but I think a lot of it obviously comes down to personal behaviour, really. There’s no temptation to go around like a rockstar or anything, you’re just humbled by the people you meet and these are genuinely engaged kids that help us out a lot of the time. Also, probably more than anything else, seeing a girl on stage I’m sure makes a huge difference.

Would a socially distanced gig ever compare to one of your regular live shows?

You get something out of the live show that’s almost drug-like, you know. And I think now more than ever, when you realise you haven’t got it anymore, you’ve got all this nervous energy in you and you haven’t got the release. I think we’re all kind of these strange, flawed people; I don’t think any of us are that normal and we need this cathartic experience in our lives so it’s tough when you haven’t got that. Once you’ve gone out to 10,000 people, you’re like “that again, please.” 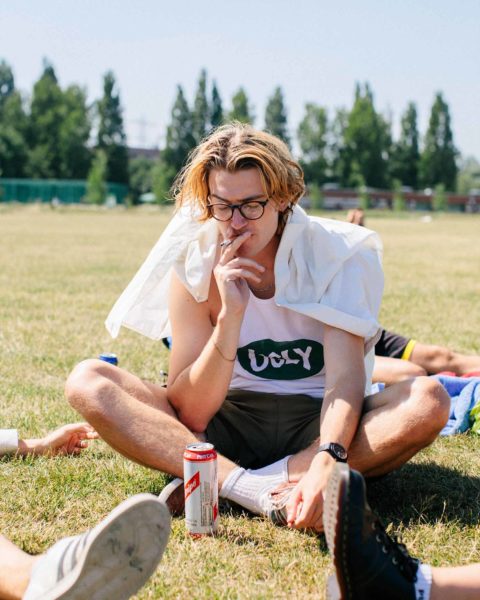 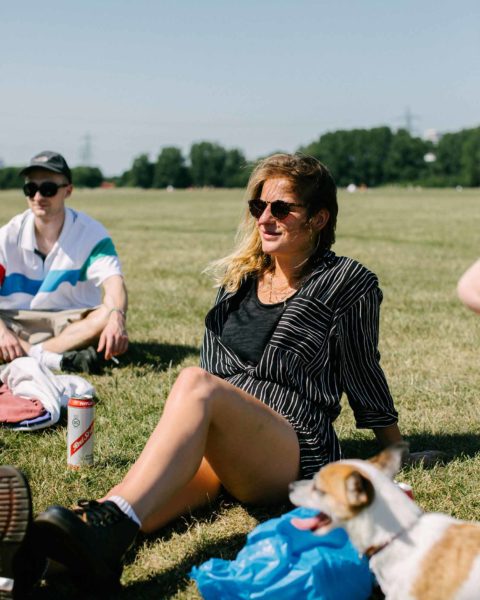 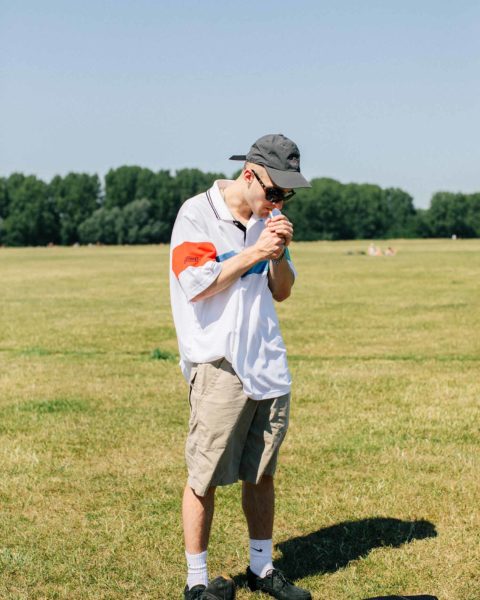 Can I head to the bookies to place my bet on album number two yet?

If you like. The odds are a little bit worse, though.

What’s the secret to being Deep Down Happy?

I think we’re lucky because a lot of the time being in a guitar band, even being on a major label, it’s still a really scrappy way to live and we can just about be able to afford to rent a very cheap house in London that’s got an illegal amount of people in it. It’s not this super easy scenario, but you get through it because you’re doing this incredible, formative experience in your life with five people that feel like your best friends and your family as well. So that’s why I feel lucky at least, for doing this with such a group of people. But it’s also a sense of trajectory on a more prosaic level; it’s all going well and everything we’re doing is the biggest thing we’ve ever done. It’s the pure love of doing it.

Listen to Sports Team's 'Deep Down Happy' album below:

A Day in the Life: Bus Trip Festival with Sports Team 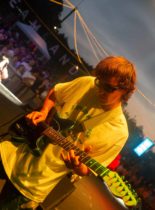 Indie band Sports Team took over Margate's Dreamland for their day-long 'Bus Trip' Festival. Find out what went down.