You might not know Sugarcane just yet, but you almost certainly know the people behind it.  Founded by writer Robin French, the creator of BBC series Cuckoo, the band also features Antonia Thomas, star of Misfits and Lovesick, on vocals. Inspired by the sounds of South America, and bossa nova, in particular, the pair, alongside the rest of Sugarcane have been creating smooth, soulful music together for a while now and have just released their new EP One Specific Thing. One of the highlights of the EP is ‘Bethnal Green Blues’. Premiering on Notion today, it’s a gently bossa nova infused track that also borrows from more ‘traditional’ western songwriters like Leonard Cohen, to weave a tale of heartbreak in East London, via Argentina.

Speaking about the track, Sugarcane said “I think in the Fifties, bossa nova got associated exclusively with Jazz and (that horrible phrase) easy listening – but I love the way bands like Little Joy and Devendra Banhart put it in much more of a folk or indie place. That’s where Sugarcane are coming from on this EP, and particularly on this song.  It’s weird – sometimes you write a sad song from a happy moment. This song sort of popped into my head while I was flying to South America to see a girl I’d fallen for. It’s about the emotional ice age after a romance fails, but it was written as that ice melted under the Argentine sun. This is a tough song to sing because it goes low and high – but Antonia has such a great range, we had lots of choices where we put it. Her voice sounds good everywhere!” Listen to ‘Bethnal Green Blues’ below. 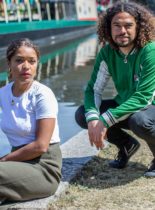