The 9-to-5 grind just isn’t for Cowgirl Clue. You won’t find the Texas-raised, SoCal-based independent producer, DJ, and pop artist passing the hours away at a grey desk in some clinical office. Rather, you’ll find her tinkering on her laptop in the studio while wearing faerie wings, or performing in cool venues across the U.S. while opening for the likes of Dorian Electra and Kero Kero Bonito. She’s the boss of her own whimsical creative enterprise.

The singer-songwriter embraces her entrepreneurial spirit and artistic independence by refusing to adhere to radio trends or bow to traditional music industry systems. Her hi-NRG debut album, Icebreaker, is an ooey-gooey blend of glossy early aughts disco/ambient electro-pop, ‘90s house music, and futuristic dance-punk. The record is a glittery, groovy Y2K sonic smoothie that sounds like what you might get if you tossed Deee-Lite, The Gentle People, and early Hooverphonic into a blender—and then spiked the concoction with The Powerpuff Girls theme song for good measure.

Aside from her more obvious millennium-era influences, the artist also imbues her swirly lava lamp brand of pop with a primal punk spirit. Premiering exclusively on Notion, the glossy music video for her new single, “Tainted”, sees Cowgirl Clue toggling between anarchist computer hacker and disenchanted office worker. (It’s like Hackers meets Office Space if it starred Lady Miss Kier and the movie ended with a catwalk rave instead of an office building burning to the ground.)

“Feelings are sourced from different experiences, good and bad”, Cowgirl Clue shares about the track, which is about how “negative energy can spread like a virus that could totally taint our lives. It’s like when you wake up from a nightmare and can’t go back to sleep because you’re afraid of jumping back into that experience. It can come from anywhere.”

Below, Cowgirl Clue reveals her views on corporate culture, her nostalgic early 2000s influences, and her personal favourite social icebreaker. 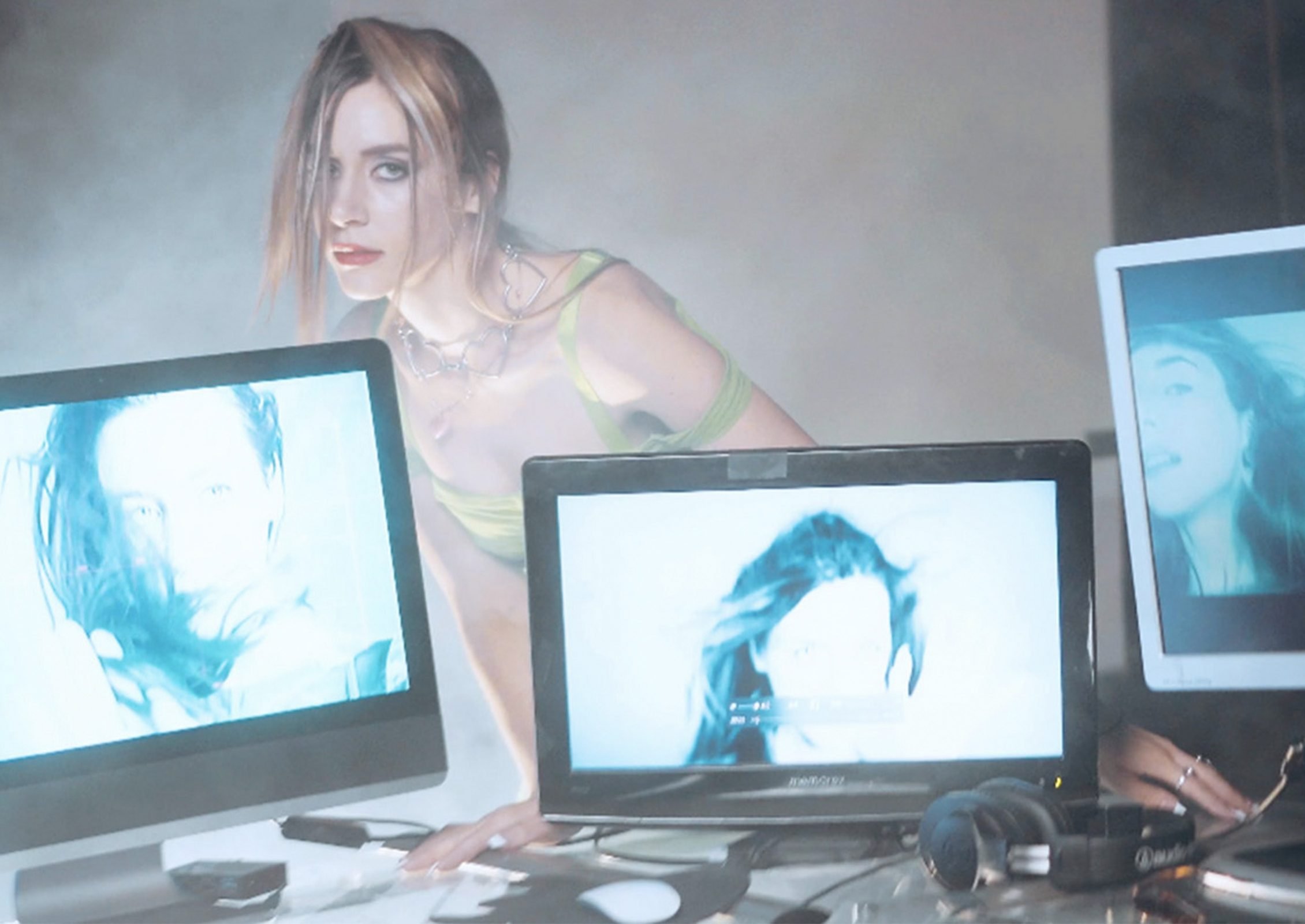 What did your mood board for the “Tainted” music video look like?

I made three different collages that consisted of all kinds of wild images, from 2003 fashion campaigns and cyberpunk anime to old PlayStation commercials and “…Baby One More Time.”

How do you personally view the typical corporate 9-to-5 system?

I’ve had a lot of jobs throughout my life and I can safely say my brain doesn’t love a structured environment, but I do feel like it’s entirely based on personal discretion as to [whether or not] it’s a suitable for someone’s lifestyle or not.

Do you think most office workers are exploited by the grind?

It would be unfair for me to answer that for the millions of people who work in an office environment. Of course, I think some people really enjoy their jobs and some hate it.  Regardless, I feel like no matter what your career path may be, the notorious strung out pressure is just straight up not healthy as an individual.

Do you think our corporations would benefit from a little anarchy?

We live in a digital world of perfectionism, so there isn’t much room for mistakes or patience anymore. With perfectionism and instant gratification comes bad habits that cover up those mistakes, so I think a lot of major corporations could benefit from being more transparent, honest, and resourceful.

Surveillance cameras and webcams play an interesting role in the “Tainted” video as well. What are your thoughts on the state of surveillance in society today?

I wanted to create a portal between two worlds that are connected. The Hacker is foreshadowing the office worker by implementing a virus on the computer. I think the camera serves as curiosity, wonder, and absent trust.

You portray two characters in the video: a hacker and an office worker. Who do you relate to more? Do these two characters sort of live inside you in different ways IRL?

Totally. The Hacker is much more playful and the Office Worker is my laundry list. I’m an independent artist and often have to wear many hats to get where I want to be.

How is the video narrative related to your view of the music industry?

There is no right or wrong way to get your feet wet in music, and I think that more people should know this. I have self-taught [myself] through this process and it’s been supernatural. I don’t want to pay for more streams or take myself too seriously. I want things to vibe and I never want to be in a place where being Cowgirl Clue isn’t something I love anymore. I want to make music that is inviting; a breath of fresh air for myself and the world. I want it to be like a daydream from reality to the ears.

Your debut album, Icebreaker, has a very specific late ‘90s, early 2000s DIY cyber-pop sound. Can you share some of your inspirations and influences?

When I am going through a sound catalogue on an instrument, different sounds create imagery for me and I like to play off that during the writing process. I’ve always been inspired by Deee-Lite, Perfume, Lil Kim, and Aphex Twin, so when you have these influences all in one, I guess it ends up having a cyber-pop like sound. But no matter what my influences are, I want Cowgirl Clue to sound current and not like something you can put your finger on.

Are there any albums that were particularly formative for you growing up?

The first CD I think I ever bought was Tragic Kingdom. I still love that album.

What about the ‘90s/early 2000s aesthetic or energy do you find yourself so drawn to? Is it nostalgia, or something else?

I guess my Scorpio comes out with the nostalgia sometimes, but I try to keep it tasteful and current without being too specific to an era, style, or place because I’m inspired by all sorts of eras to be honest. Pop and dance culture was super present during that time so maybe that’s why I have been more inspired by early 2000s style, but I’m also super inspired by the future too.

Existing in a DIY dance music space, what is it about dance/electronic music that lends itself to experimentation?

All music starts out experimental in some way unless you are following a formula for radio play or something. There is so much to discover in music that I feel hasn’t even barely been tapped into, even by myself. I like to pair a punk mindset with dance music to make my music interesting and simple. I guess the crossover makes it experimental to some.

Vada Vada is an enigma. It’s when my friends and I are thriving strictly off of pure creative energy, like a frequency or something, without being pretentious. It’s a wavelength of mystery and freedom, supporting one another’s talents, and acceptance. It’s about using what you have to create something beautiful and expressive and having the drive to support that mindset and let it evolve throughout your lifetime.

What does it mean to “live hella faerie”? When were you first drawn to faerie imagery and fae lore?

A psychic once told me I was a faerie in a past life. I’m not sure what the hell that means, but I love thinking about the supernatural and incorporating it into my reality. It makes life feel dimensional. Basically, to live Hella Faerie is all about knowing that destiny can take you to special places that you couldn’t even imagine, and all you have to do is trust your intuition and fuck any doubt that creeps up.

What’s the best icebreaker you ever experienced in a social situation?

“wuts up” is forever and always going to be the best icebreaker.

Gallop into Cowgirl Clue's latest video for "Tainted" below!