With so much time spent inside this year, it's a good job we've had these brilliant TV shows to entertain us. Find out which shows made Notion's Best of 2020 list.

I May Destroy You

After being sexually assaulted in a nightclub, Arabella’s (played by Michaela Coel) life changes irreversibly and she is forced to reassess everything, including her career, friends and family. - Resisting the label of sexual assault victim, Arabella takes on the painful yet freeing climb to who she could be. - The comedy-drama has been praised for its unique telling of sexual assault and its willingness to push boundaries.

Based on Sally Rooney’s best-selling novel, Normal People is a modern love story about how one person can unexpectedly change another person's life and how complicated intimacy can be. It follows Marianne and Connell over several years, as they embark on an on-again/off-again romance that starts at school and continues through college, both testing their relationship as they explore different versions of themselves. Normal People reportedly gave BBC Three its best ever week on iPlayer, receiving over 16.2 million programme requests across the 12 episodes. It has also received multiple Primetime Emmy Awards nominations since its release.

Joe Exotic spirals out of control in this true murder-for-hire documentary about the deeply interconnected underworld of big cat breeding. With its almost unbelievable storyline and collection of eccentric characters, such as the now infamous Carole Baskin, it became one of the most talked about topics online and in meme culture. Assumingly helped by its release coinciding with the first lockdown, it ranked as one of Netflix’s most successful shows to date.

The show is a riveting adaptation of Walter Tevis’ ground-breaking novel. Beginning in the mid 1950s, it follows a young chess prodigy, played by Anya Taylor-Joy, and her rise from an orphanage to the world stage as she grapples with addiction. But genius comes with a cost. With high praise from the chess community and positive response from critics, it has been watched by over 62 million households since its release in October.

This six-part series focuses on Nicole Kidman’s character, Grace Fraser, a successful therapist, and her devoted husband, Jonathan (played by Hugh Grant), and their young son who attends an elite private school in New York City. A chasm opens in Grace's seemingly perfect life: a violent death, a missing spouse, and a chain of terrible revelations. It was the first HBO show to gain viewership every week over the course of the season and was the biggest U.S. show to launch on Sky in the U.K, beating the record previously held by Game of Thrones.

The Mandalorian is the first live-action series in the Star Wars franchise, beginning five years after the events of Return of the Jedi. It stars Pedro Pascal as the title character, a lone bounty hunter who is hired to retrieve "The Child” and ends up caring for him and attempting to reunite him with his kind. With seemingly everyone obsessing over Baby Yoda in the past year, season 2 arrived in October. The Mandalorian and The Child continue their journey, facing enemies and rallying allies as they make their way through a dangerous galaxy in the tumultuous era after the collapse of the Galactic Empire.

Ozark stars Jason Bateman and Laura Linney as a married couple who relocate their family to the Ozarks, a region of central Missouri, as they find themselves tied up laundering money for a Mexican drug cartel. The states have never been higher in the latest season. Tensions mount surrounding the family’s new casino. The couple struggle to balance their family's safety with the growing success of their money laundering empire. The series has received 32 Primetime Emmy Award nominations including two for Outstanding Drama Series.

The series traces two long-prepared heists on the Royal Mint of Spain and the Bank of Spain, led by “The Professor” who manipulates the police to carry out his plan. This year saw the return of the show with Part 4. Lives are on the line as The Professor's plan begins to unravel and the thieves must fend off enemies from both inside and outside the Bank of Spain.

From the mind of Ricky Gervais, After Life is the story of Tony and how his all-too-perfect life is changed after the sudden death of his wife Lisa. Living a life of saying and doing whatever he likes from now on, Tony doesn’t care about himself or anyone else. This turns out to be tricky when everyone is trying to save the nice guy they used to know. Still struggling with immense grief, Tony is trying to turn over a new leaf. Season 2 looks at whether he’ll succeed in helping the people around him, or if he’ll go back to being the same old Tony. - Ricky’s dark yet humorous take on the subject matter looks to further prompt discussions about the different ways we cope with grief and why we should continue to share our emotions.

Following the huge success and honest portrayal of all types of sexual relationships in the first season, Asa Butterfield is joined again by Gillian Anderson, Ncuti Gatwa, Emma Mackey, Connor Swindells, Aimee Lou Wood and Kedar Williams-Stirling. Season 2 picks up where we left off, as Asa (Otis) is hit with the reality and pressures of a high school romance. That romance is further tested by the introduction of new students who challenge the status quo at Moordale High and a chlamydia outbreak that causes students to question and struggle with topical issues.With multiple BAFTA nominations, Ncuti Gatwa, who plays gay, Black teen, Eric, has particularly received praise from critics and cultural commentators, who have noted the importance of his role that was not relegated to the clichés of a "best friend" type character.

The Boys is an irreverent take on what happens when superheroes, who are as popular as celebrities, as influential as politicians and as revered as Gods, abuse their superpowers rather than use them for good. It's the powerless against the super powerful as “The Boys”, led by Billy Butcher, embark on a heroic quest to expose the truth about the world’s most notorious superheroes. The Boys had attracted 8 million total viewers in its first 10 days of release, making it one of the most successful original programs on Amazon Prime. Following their losses in Season 1, The Boys are on the run from the law and are struggling to fight back against the Superheroes. Vought, the company that manages the heroes, cashes in on the panic over the new threat of Supervillains. 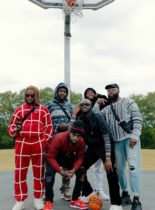 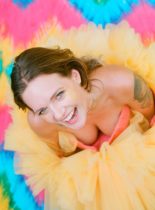 Pop sensation, Tove Lo, graces Notion's special edition digital cover to celebrate Pride. We spoke about everything from fostering dogs to her 'Sunshine Kitty (Paw Prints Edition)' record, and what Pride means to her.