The Endless Creativity of Khruangbin

Texan trio, Khruangbin, serve psychedelic sounds and eclectic style. We caught up with bassist Laura Lee to hear all about the band's creative process.

Formed of Laura Lee on bass, Mark Speer on guitar, and DJ Johnson on drums, the spellbinding band from Houston, Texas have carved a global fanbase for themselves by blending soul, dub, rock, funk and psychedelia into their uniquely entrancing sound.

On Khruangbin’s third album, ‘Mordechai,’ the trio are grooving more seamlessly together. Filled with far-out, meandering melodies, this is the first time that the mainly instrumental band have featured prominent vocals on nearly every song. It’s a shift that has been welcomed with open arms by their listeners, as they have managed to evolve without losing their former selves in the process.  After several years on the road, ‘Mordechai’ is a re-centering for Khruangbin. On it, you can hear the influences from their travels, incorporating reference points from Pakistan, Korea, and West Africa, including strains of Indian chanting boxes and Congolese syncopated guitar.

Khruangbin has become known for not only their psychedelic sound and magnetic live shows but also their eclectic, enviable style. I mean, just check out the absolute lewks they’re all serving in this feature. Visual identity has always been intrinsically tied to the lasting power of musicians – and Khruangbin has a particularly strong hand in that regard. From Laura’s incredible gowns to Mark’s vibey 70s suits and DJ’s fabulous taste in accessories, the trio’s aesthetics are one of the undeniable appeals of Khruangbin. “I think that my expression – whether it’s in music or in my clothes – is about trying to reflect how I feel and who I am,” Laura Lee tells us. 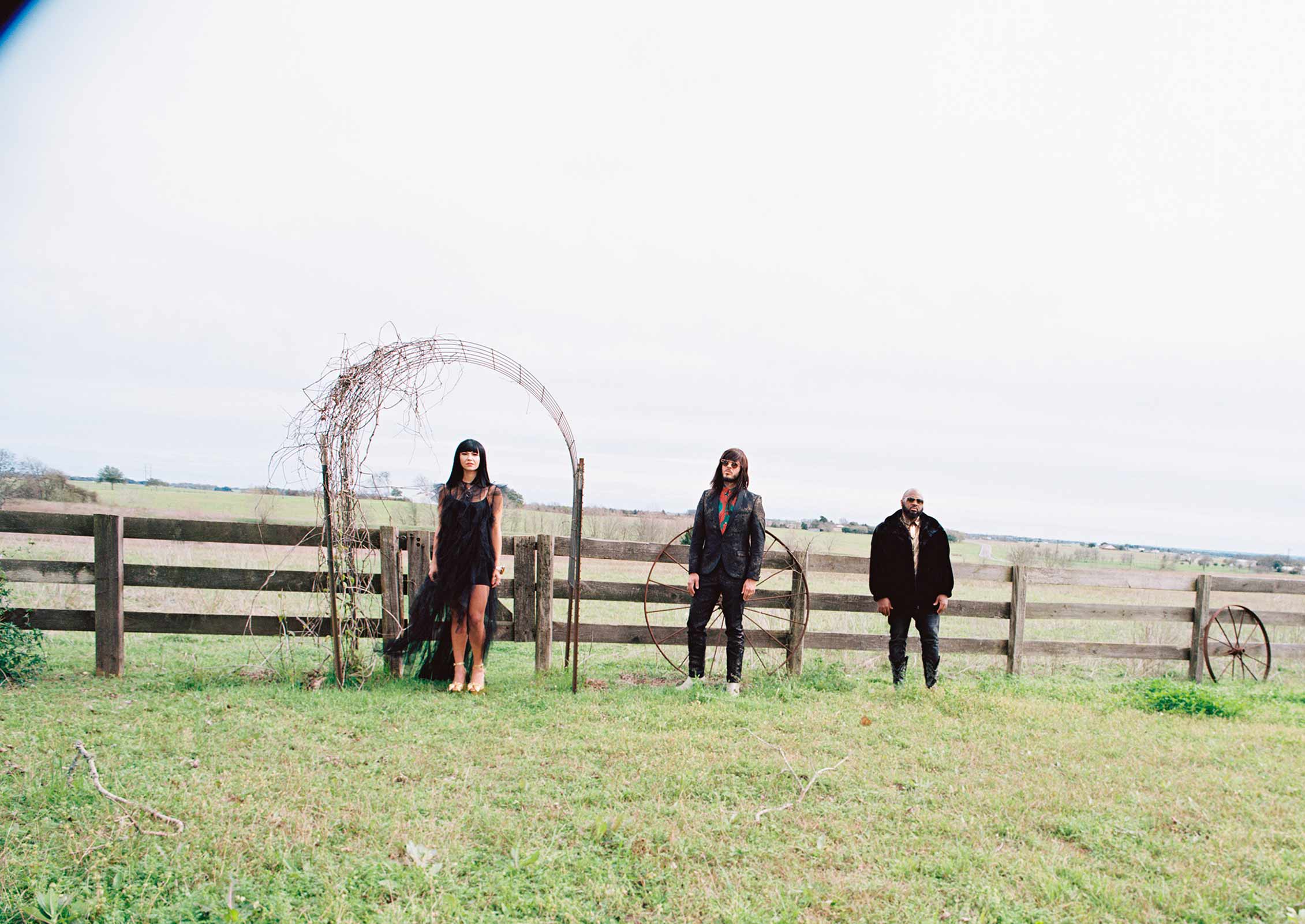 It would seem to anyone watching that Khruangbin are some of the most creative people around, but Laura Lee tells us that she’s still realising that about herself. Although she now resides in the US, it took moving to London some years ago for her to really open up to her creativity. “I think there’s something about when you move, you feel free in a way that you weren’t before. I feel like I really blossomed as a result of being in London,” she says.

Throughout her schooling years, Laura had a passion for drawing and planned to be an artist or an architect. Whilst she found a career in music, Laura tells us that she uses all the skills she learned along the way in what she does now: “I’m still very artistic and I curate all the poster artwork we come up with. I’m always getting to interact with different artists.”

One such example of this is the ‘Mordechai’ album cover art. “I worked with a designer to make it what it is, but the original drawings are mine,” Laura says. “It’s an original snapshot of a day that I had, this hike I went on with my friend Mordechai, and the things I saw on that hike are all reflected in the cover artwork.”

Laura is constantly being inspired by the visual world, finding artistic influence in everything from fashion and drawing to cooking and playing music. Whilst Mark and DJ focus more on the music itself, for Laura, “songs are moods and they’re feelings.” 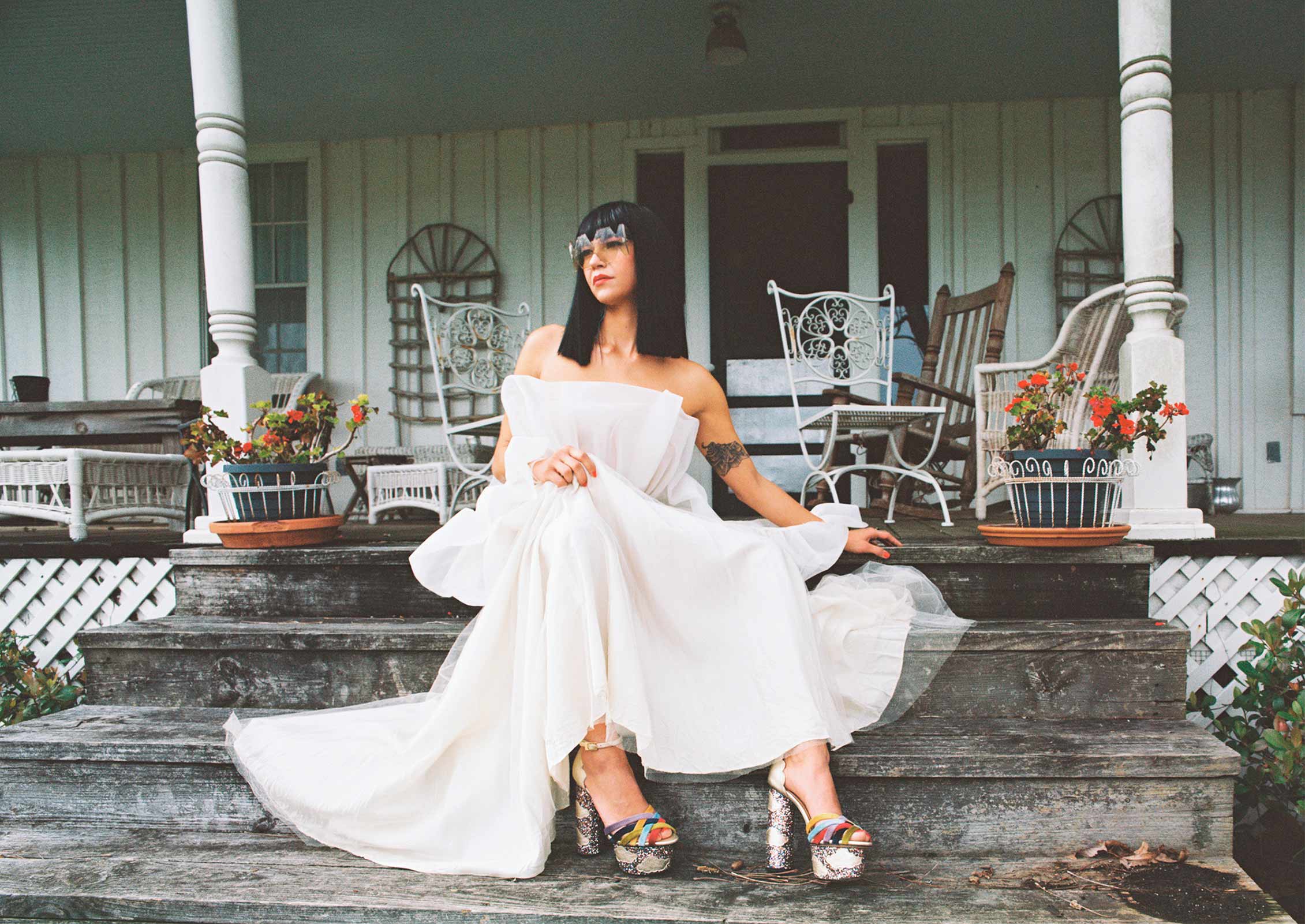 Whilst Khruangbin’s records may seem highly polished, Laura tells us that there’s no strict formula when they’re creating new music. “When we’re writing the words to the songs, the music comes first. I’ll listen to the song and have my notebook in front of me, flip through the pages and find something I’ve written that seems to match the sentiment of the song. And once we’d realised more or less what the album was about and what we wanted to call it I drew the cover.”

Despite this easy-going approach, Khruangbin are by no means immune from the associated stresses of creating a new album. “There’s a pressure on an album when you’re making it, because now we know we have an audience that’s gonna listen to it and feedback and all this stuff… How do you make an original song? How do you have an original title? How do you have an original album cover?” she questions. “I really wanted this time to give it a go. I wanted to try to drive. How do you make something original? I realised that nobody is gonna have my experience that day, even if they were on that hike, they wouldn’t have seen it, and so that felt like the most original, beautiful thing I could produce.”

It may seem, with the stream of meandering, trippy music that Khruangbin are releasing, that they’re constantly on the ball, but Laura admits that “even if it’s a creative project you’re working on, if the deadline’s approaching, you find something else to do to procrastinate. So, I feel like I do that a lot. I’ll focus backstage on what my outfit’s gonna be for the show instead of practising.” 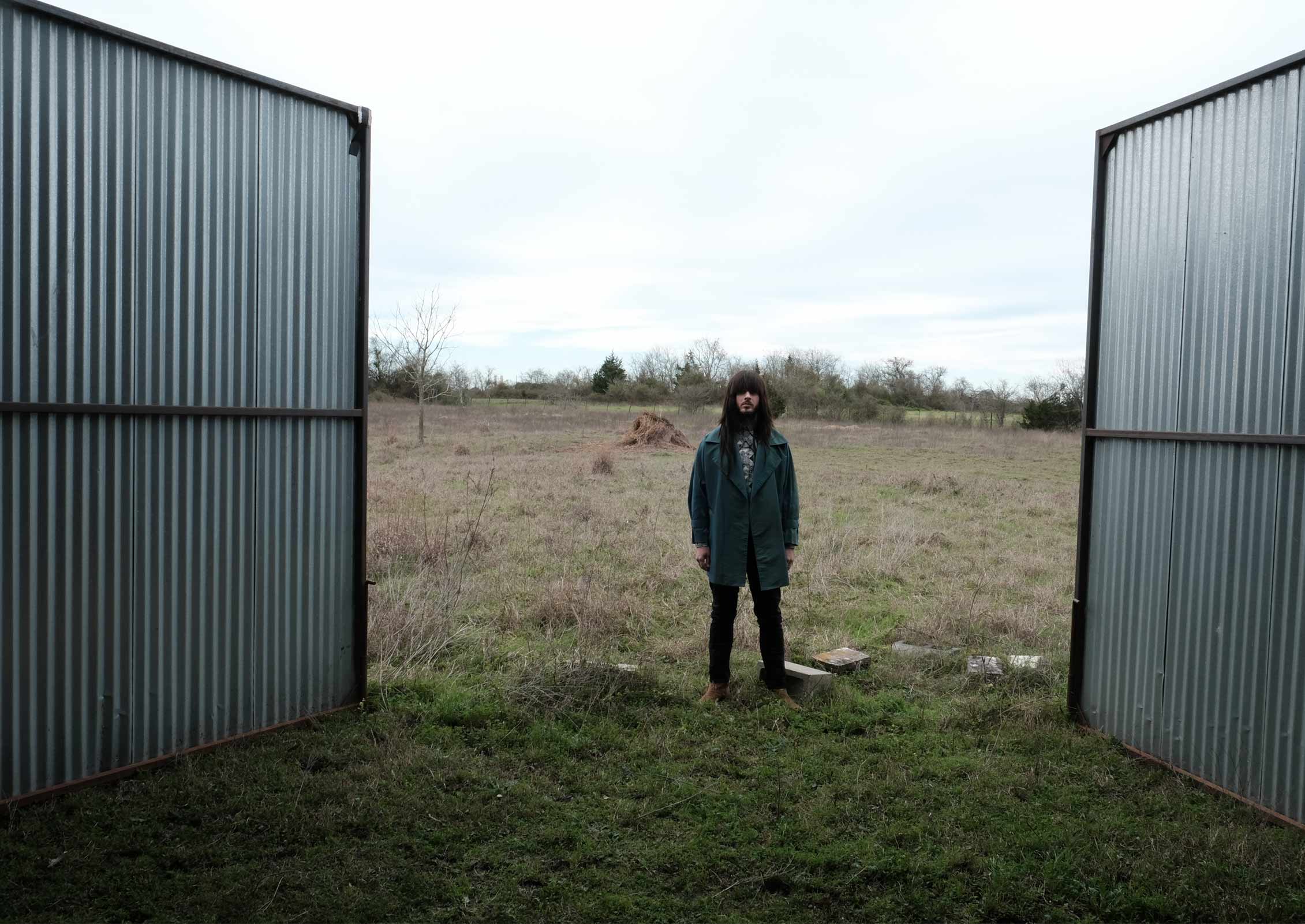 But how does Laura Lee preserve her creative energy? “When I’m on the road I walk every day,” she says. “Without fail, I will be on an hour plus walk because it’s something that I can come home to, no matter where. It fulfils two things. One, it’s just me and can be alone with my thoughts and sometimes being static on the road is difficult because backstage areas aren’t necessarily quiet or vibey. So, a walk tends to be that, and I also get to see where I am a little bit. Even if I’m not able to experience everything that a city has to offer, I can walk in it, play in it, then I feel like I’ve been there. But when I’m not on the road, I have a lot more time to write, meditate, and have more nurturing time.”

These forms of self-care have come quite naturally to Laura over the years, but whilst touring, she realised just how important they were to her. “There’s certain staples that make me feel like myself no matter where I am,” she says.

By the summer of 2019, Khruangbin had been on tour for nearly three-and-a-half years, playing their previous albums, The Universe Smiles Upon You and Con Todo El Mundo to audiences across North and South America, Europe, and Southeast Asia. Although touring doubtless provides some incredible experiences, being constantly on the move is sure to become draining, and sometimes quite disconnecting for musicians. So Khruangbin – who have been releasing music since 2014 – make sure to hit the reset button before starting a new project. Their clean slate space, Laura shares, is their farm, and in particular, their barn in Burton, Texas. “The barn is a shell, it’s not a studio, it’s a dirt floor covered in metal. It’s a blank slate. Every time we go back, it’s empty; we have to fill it.” 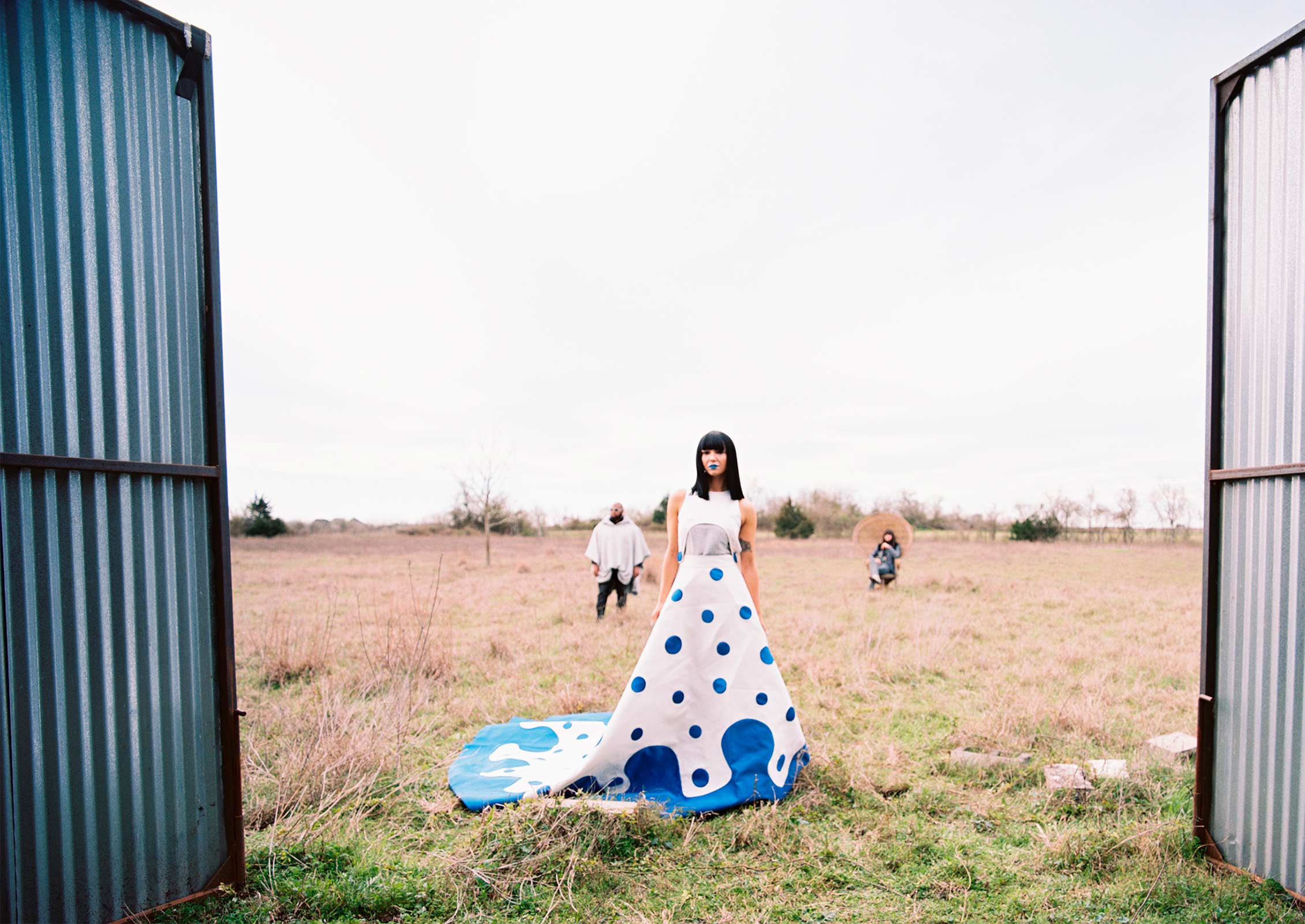 Devoid of any internet, the farm’s landscape is “beautiful but simple.” Without the constant stimulation of everything usually filling their normal lives, the trio can slow down, go back to basics and enjoy the process of making music once more.

Whilst the farm acts as a haven for Khruangbin, Laura admits that it “always takes a minute to get into it” because of the stark contrast it presents to their usually busy existence. “It’s interesting because we started using the space because we were broke,” Laura laughs. “We needed a place to practice music where we could be as loud or as quiet as possible. Sometimes when you rent studios in the city, you’re competing with sound. It’s kinda become the fourth member – or the main member of the band in a way.”

Whatever they do and however they do it – it seems to be working for them. Khruangbin seems to have creative juices coming out of their ears. 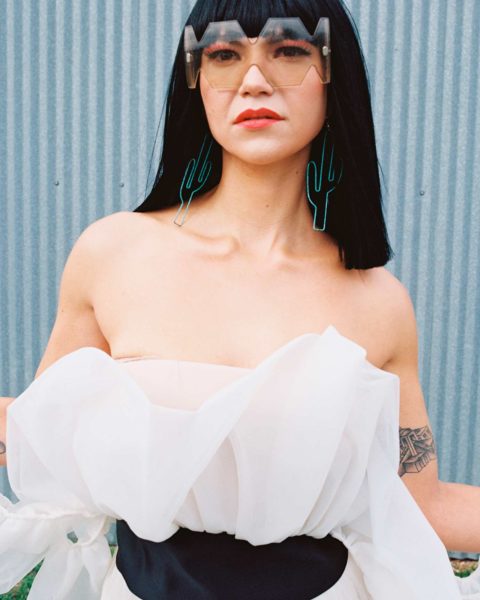 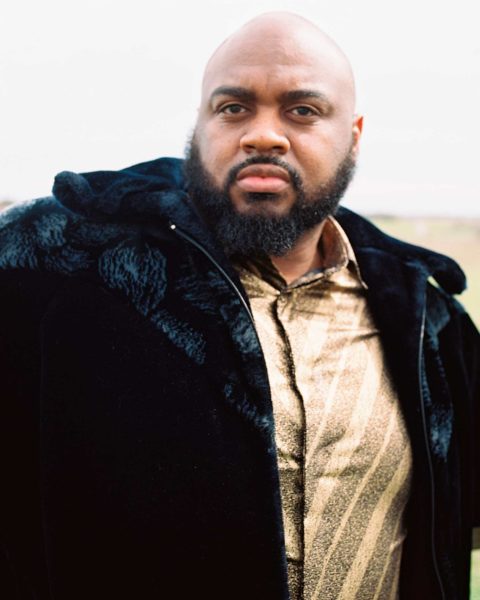 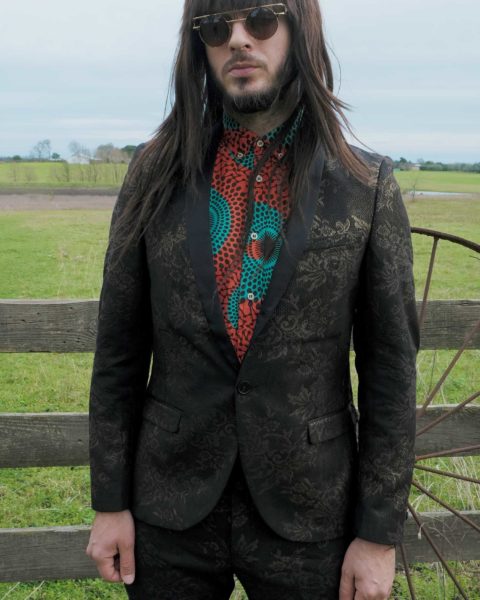 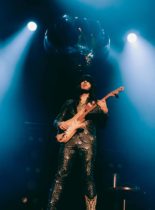 Under the light of two giant disco balls, Texas three-piece Khruangbin electrified the 10,000-strong crowd at London's Alexandra Palace on the 14th of April.