The Excellence of Susan Wokoma

Bafta Breakthrough Brit, Susan Wokoma, shares her spooky experiences on set, her transition between theatre and television, and her new series ‘Truth Seekers’.

Known for her outstanding performances on E4’s Chewing Gum – in which she starred alongside Michaela Coel – and the comedic horror series, Crazyhead, Susan Wokoma continues to rise from strength to strength.

The British-Nigerian actor steadily began to carve her path to success when she chose to study acting at the Royal Academy of Dramatic Arts. Leading to many notable appearances across theatre, film, and television, she has been hailed as one of Bafta’s Breakthrough Brits for her diverse and award-winning body of work for both writing and acting.

Her consistency and creative flair have earned her a place on the throne of comedy alongside other sitcom stars. Her latest turn is a role in the Amazon Original supernatural horror-comedy series Truth Seekers, written, produced, and starring Hot Fuzz‘s Nick Frost and Simon Pegg. The eight-episode series follows a team of part-time paranormal investigators who uncover and film ghost sightings across the UK, landing 30th October.

Notion caught up with Susan about her own conspiracy theories,  memorable moments on set, and exciting written projects she’s planning in the near future. 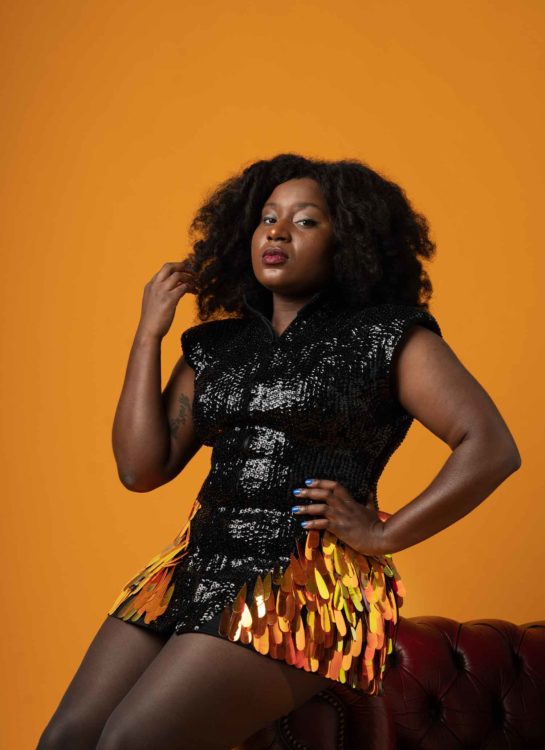 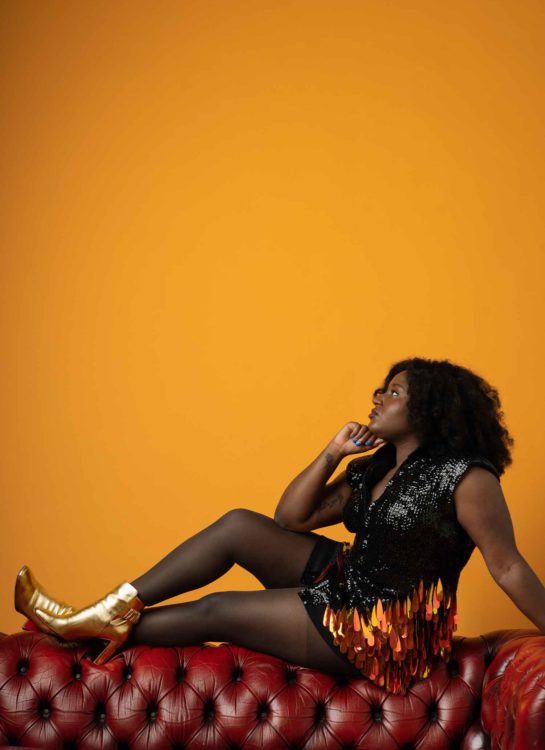 Who were the actors you looked up to when you were starting out? Have these inspirations changed now that you’re more established in your career?

I was obsessed with Helen Mirren. I watched Prime Suspect too young I think, for the subject matter, but I loved how cool and boss “DCI Jane Tennison” was; and The Queen was doing the awards circuit around the time I was set on being an actor and she just looked like she was having such fun. I always associate success and fun with being older, because of that I think my inspirations have changed in that there are more prominent black actresses who look like me or a bit more like me. So, Viola Davis, Regina King. I also look up to my peers – Tamara Lawrence, Naomi Ackie, Hayley Squires, Lydia Wilson to name a few.

You have played a variety of roles so far but a lot of them have elements of horror as well as comedy. Have there been any moments on set that have spooked you out?

I sadly haven’t! I’d give anything to have an on set spooky story to bore people with at dinners. There was a tv show I did that shot in the old Honey Monster factory and that was well weird. I’m super sensitive to energy and my gut was doing backflips but I didn’t actually experience anything weird. A shame.

There must be so many to choose from, but what’s been your funniest moment on set?

Oh so many, but one of the funniest slash hideous was on the show I’m shooting at the moment. Our DOP was making me laugh and I wanted to say ‘Oh, don’t! You’re gonna make me laugh!’ Instead I said ‘Oh don’t! You’re gonna make me…’ (Insert a delightful naughty thing you hopefully do at the end of doing naughty things with a lovely person) I was HORRIFIED. My co-actors lost their minds.

You have performed in a number of theatre productions alongside acting in television. How did you find the transition between the two mediums?

It’s fairly easy to move between the two in regards to performance – but I do find the immediacy of theatre exhilarating and also scary. Some audiences are incredible. Others can be hostile. I saw it when I saw Fairview at the Young Vic – it was scary. With filming, I like that you do it and move on. I’m good at letting go of information. Emptying the inbox. Or as my mum calls it – forgetting. 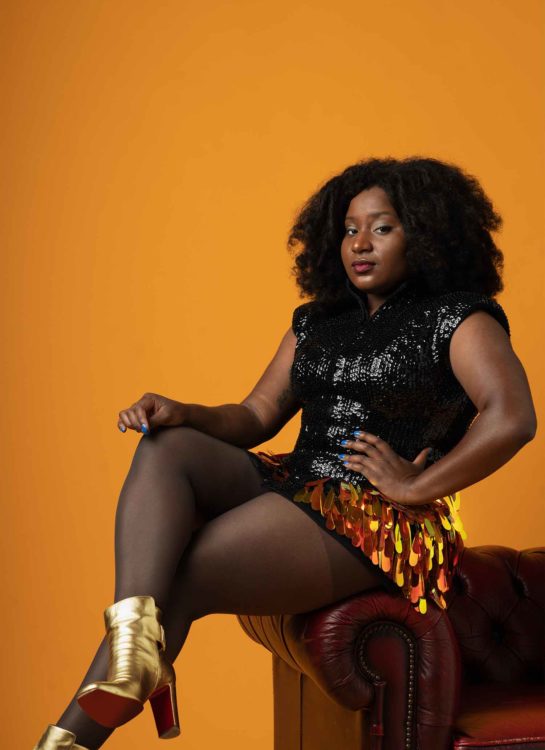 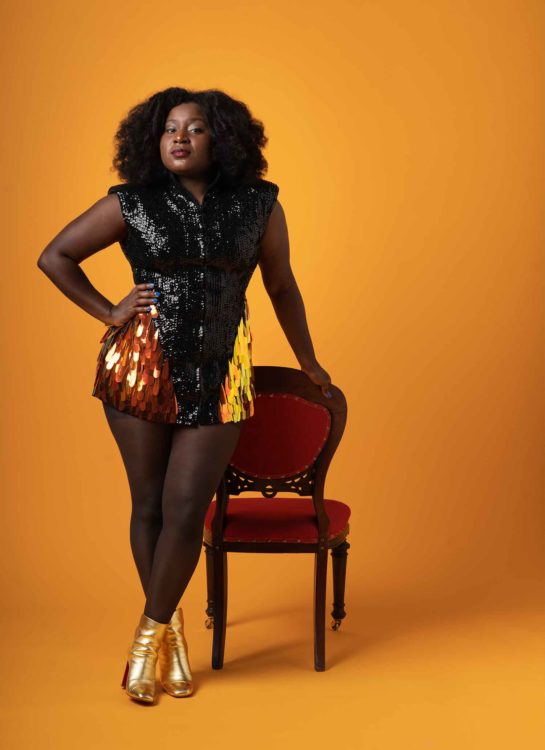 Do you prefer acting on stage or screen?

I’d say screen because I feel like I’m getting the opportunities to grow and explore more and I never expected that. I was a theatre animal but I don’t feel as embraced or challenged in that sphere.

What stands out to you most when reading new scripts? Is there anything you look out for with the characters or the storyline?

The amount of lines! That sounds crass – and I am half joking – but I think lesser represented actors are aware of things like that, whether you choose to be or not. I don’t let expectation sway me – I’ll do a few line in a Spielberg film if that’s what I want to, but I definitely consider how much a character carries their own narrative when I’m reading scripts. And I don’t think it’s unwise to keep an eye on whether you’re always playing a plot point. Years ago, I was flattered into a part only to be edited into a glorified extra and it hurt. If there is one thing you’ve got to protect as a performer, it’s your confidence. Having said that, great parts come in different amount of lines – and there’s loads of other things that determine my choice of script, not just whether it’s BAFTA worthy. For example, it can be money, if you’re working class like me, or the director if it’s someone you really admire, or other actors, or the experience. My wonderful agents send me every script. Ask them – I read and consider everything. I like being surprised. I love staying open. It’s easy to think you’re some brand machine these days but me? I’m a hustler. Artists are. And it’s why I love us.

You were in the adaptation of Chimamanda Ngozi’s Half Of A Yellow Sun, what was it like bringing a story to life that is steeped in so much history?

Well I’ve been in Half of A Yellow Sun twice now! I played Amala in the movie and Olanna in the BBC Radio adaptation by Janice Okoh this year! It meant everything to me. My parents were very much the ‘assimilate to survive’ gang of immigrants. I say that with zero shade. I couldn’t have done what they did — but there’s so much they didn’t speak of regarding Nigeria. So to learn about the war…it made so many things clear. Including why they didn’t talk of home all the time. The lasting ripples of war and colonialism. It’s present today.

I’ve read that you are also a writer – what are your plans? Would you prefer to write scripts or novels?

I genuinely couldn’t think of anything more boring than writing a novel haha! Noooo thanks. I write TV and film and because of my career as an actress, I always write with the idea of someone performing it. You’d be surprised how many gorgeous pieces of poetry you as an actor have to make sound like a living breathing person! I’m writing a film with BBC films, developing 2 TV shows and another film. I love it. 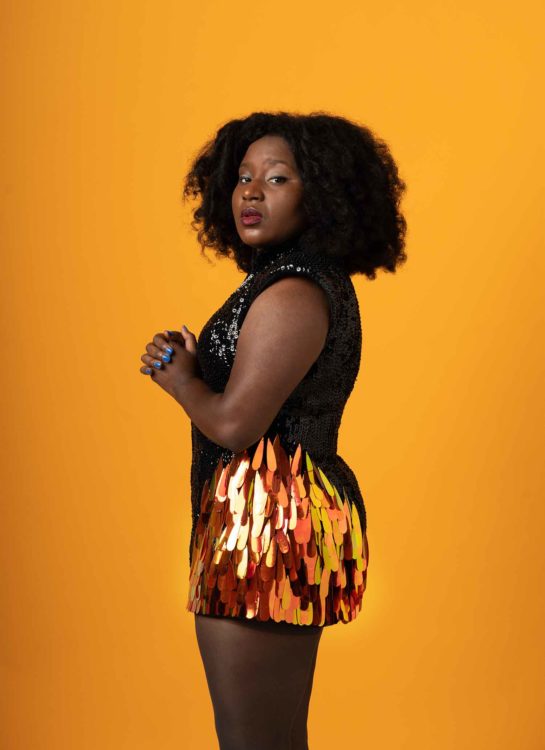 Will there be a piece of your own work for us to see soon?

Soon soon. My gut is telling me soooon.

Your new series Truth Seekers will soon be out soon. What can we expect? Are there any key moments you want us to look out for?

Lots of horror, lots of lols and lashings of heart. I think in our cynical world, it’s so great to have leads who aren’t malicious. Who believe – or want to believe in something greater than themselves. So many great moments to look out for – all starring me. Ha! I joke. The opener is soooo good!

In the series, you’ve teamed up with Samson Kayo and Simon Pegg as paranormal investigators, which eventually leads to uncovering a conspiracy. Do you have any conspiracy theories that you believe?

My mum is conspiracy theorist-in-chief. My mum has the wackiest craziest conspiracies. She once said the Bermuda Triangle is the place where skeletons drive all the boats. I haven’t laughed that hard at anything in my life. I loved that so much I put it into my short film Love The Sinner that I wrote for Sky.

As a result of my mum, I was a reluctant doubting Thomas. Now I freely embrace reading energies like I said before! But took me a while.

What’s been the best part of filming this series?

Being around Simon and Nick. They are absolute heroes of mine. I love artistic partnerships and how they work, and theirs has stood the test of time. Helen isn’t a large part but she’s innocent and sweet and I knew I had to be a part of Truth Seekers to be around them. This is a perfect example of being open when I read scripts – I’m so happy I get to be a wee cog in one of the greatest partnerships in entertainment.

Watch the trailer for 'Truth Seekers' below: