Fusing classic R&B sounds with a fresh new take on the genre, Tiana Blake is the ever-growing artist ready to take her rightful place as a key player on the UK scene.

“I’m sure of what my sound is,” says R&B artist on the rise, Tiana Blake. Drawing inspiration from the sound and aesthetics of the 90s – noting Brandy as her all-time idol – Blake’s new take on the genre is a breath of fresh air for UK R&B.

Falling in love with music as a kid whilst watching her mum sing at studio sessions, Blake began to find inspiration for her music from wherever she could. Now, her discography boasts an array of sentimental tracks that will transport you back to the 90s and early noughties, all whilst tying in her own, unique perspective as a songwriter and subverting the usual themes associated with the genre.

“My first single, ‘Cut Ties’, was a play on words because you’d assume it was about relationships, but really it’s about battling anxiety and being in a bad mindspace,” she says. “When you look back, a lot of [R&B] songs are love based. I definitely do play my own twist on that and incorporate different subjects.” 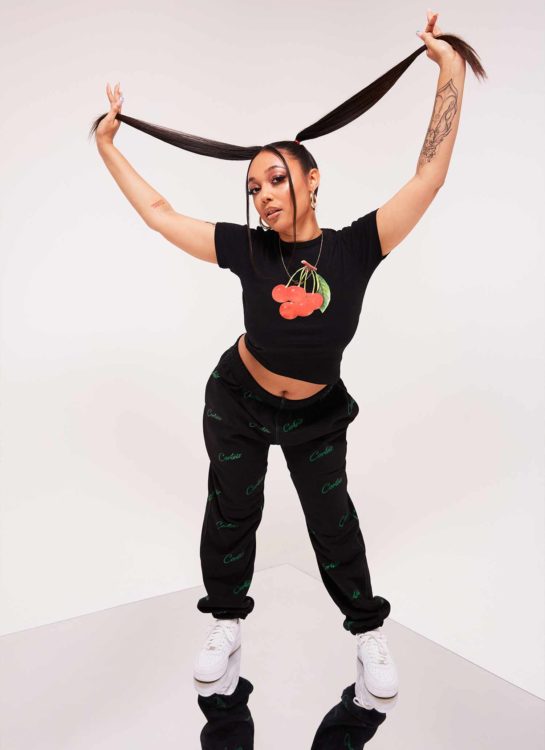 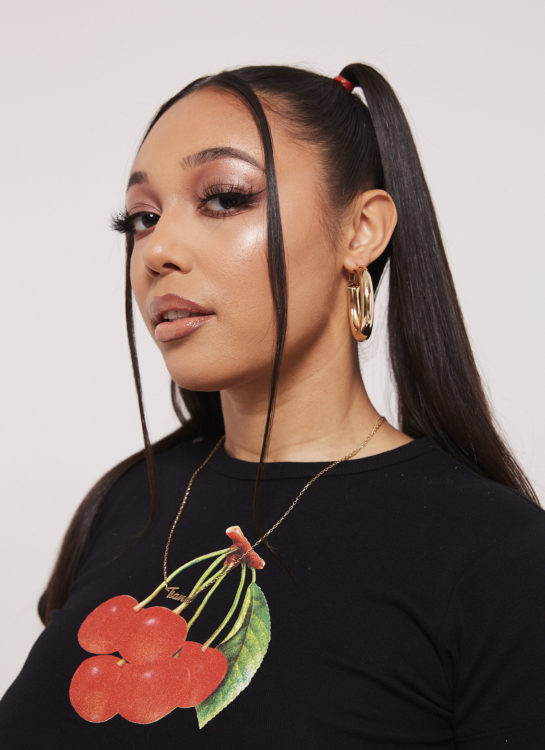 Blake’s most recent release, “Interruption”, is a display of honeyed vocals woven with premium production. It’s sure to leave you dewy-eyed for the past and reflective of the track’s lyrical exploration of not letting life get in the way of relationships. Even though Blake is confident in the sounds she is putting out, she stresses that she is an artist who thrives on perpetual growth.  “I’m forever growing. I’ve obviously been doing music a long time but taking it back to my first release, I’ve only kind of been in music for a year. I think it’s important to know my sound is forever growing,” she explains.

And for someone who prides themself on developing as an artist, Blake’s upcoming project, which is being kept under lock and key, will no doubt continue to show her blooming capabilities and declare her as the UK’s R&B one to watch.

Notion sat down with the future R&B star to talk about upcoming releases, astrology, finding her role in the world, and growing as an artist. 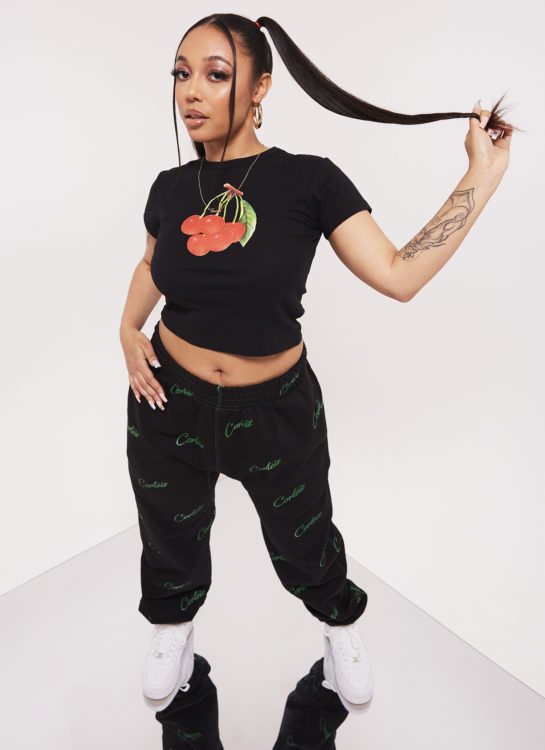 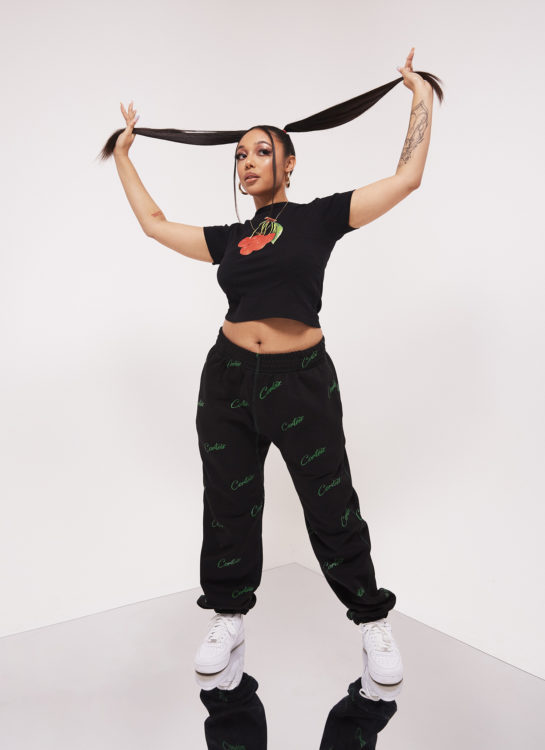 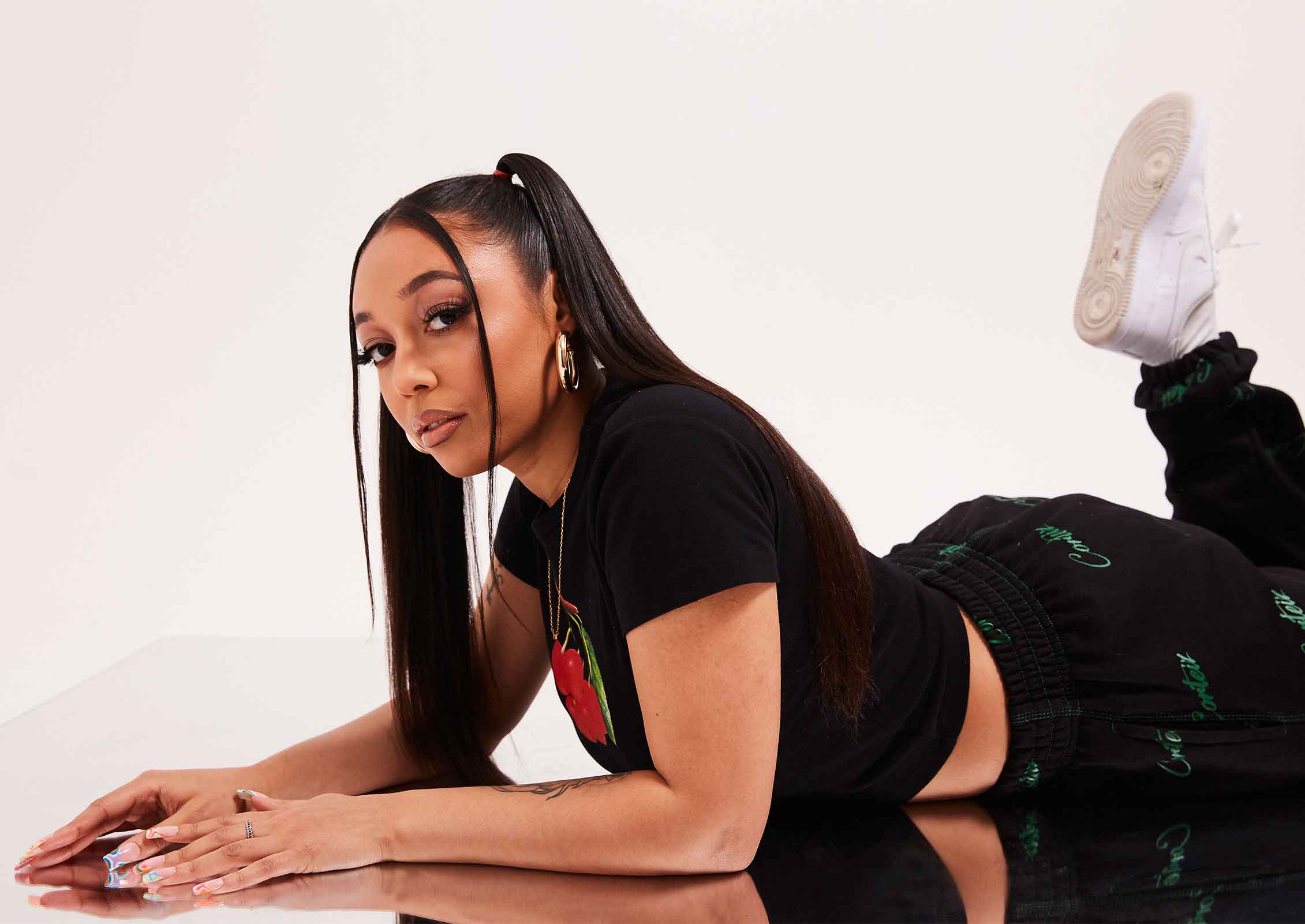 How do you want to be seen as an artist?

As you said, it’s only been a year, would you say you’re still finding your feet with it or would you say that you are certain about the things you want to put out and achieve?

At the moment, I’m definitely sure of the things I want to do and put out. It took me a while to get here. I think from releasing my first single, even before, it’s been a journey where I’ve tried new things. Cut Ties portrays my sound the best. After that, I had singles called “Monday” and “Hit The Spot”, and they’re a little bit different, so I think you can actually see that I dabbled and experimented with different sounds. Now, I’m more sure of what my sound is at the moment.

Talk to me about your love for astrology. How does it impact your life, your love, and your music?

I’ve connected with astrology quite a lot. I’m not a pro in it. There’s still quite a lot I don’t understand or need to learn or would love to learn. So far, I’ve really delved into it. I’m a Taurus. I’m always reading up about my horoscopes and what the next coming weeks mean for me.

Am I right in thinking that mercury isn’t in retrograde at the moment? Is that right?

You know what, I’m not too sure because that usually isn’t a good thing.

What does it mean if mercury is in retrograde for your creativity?

It depends. I might be totally wrong here, but I think each retrograde means something different but it usually has this pattern where it’s a time to take time and not do anything major. It’s just not a good time, so just chill. 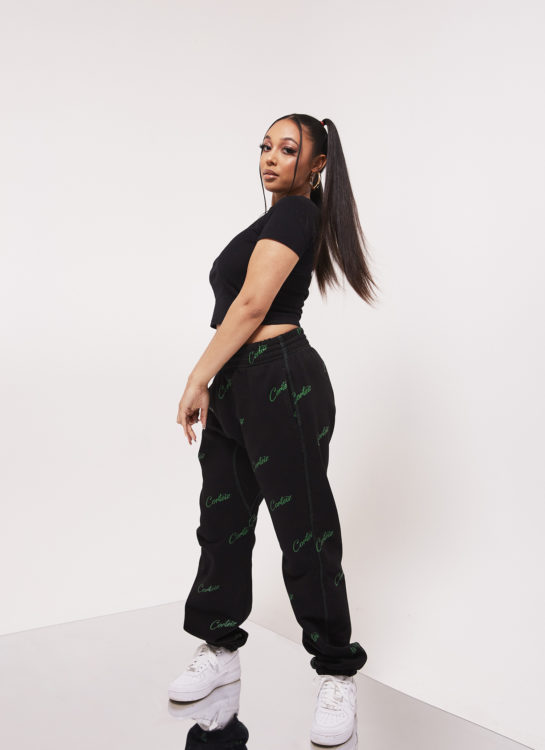 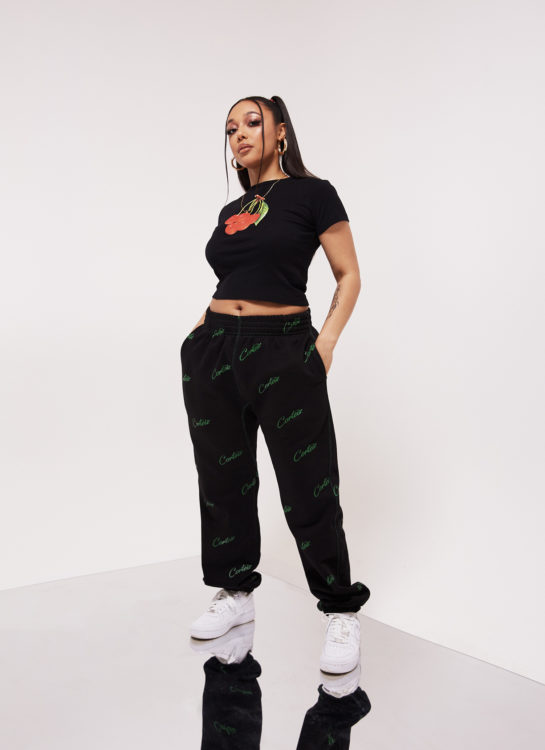 As a Taurus, what are the qualities that you see in other star signs that you might write about in your music, for example, that aren’t necessarily compatible with being a Taurus?

I haven’t actually done anything like this with music. I haven’t written an astrology-based song about someone else and their star sign. But the sign I clash with a lot is Aries. Aries are known to be quite fiery. Taurus is an earth sign but I feel like out of the earth sign it’s the most fiery. So, there’s a clash there.

How do you feel that the next few months – returning to some normality – will impact you creatively?

You worked with MNEK on Interruption, who else would you love to work with this year?

Do you know what, I’m actually not too sure. I think I’ve been so caught up in my own catalog. Especially with this project, I’ve been so consumed. I haven’t even taken the time out to think about collaborations. There’s so many amazing artists at the moment, especially in R&B, and UK R&B. I’m really excited to start that conversation and start thinking about it.

Who would be the ideal person, dead or alive, to work with?

I’m going to go really cliche and go for my idol and say Brandy. Just because that would be insane. I think I would have an out-of-body experience if I had the opportunity to work with Brandy.

Which is your favourite Brandy track?

They change all the time. At the moment, it is “Say You Will”.

What were your main inspirations and themes for “Interruption”?

When it comes to taking inspiration, I don’t always write about complete personal experiences. I like to story tell. That can even be thinking up a subject and writing on that. That’s the take I went in with for Interruption. It’s just about making sure you’re taking the time out to spend with your significant other. It’s so easy to get caught up in life. Whether that be work or leisure, or whatever. I think when you’re in a relationship, especially a long-term one, it’s just really important to dedicate that time to bond. 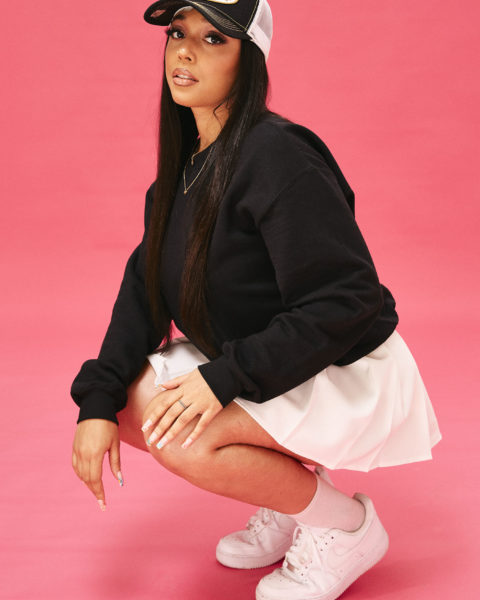 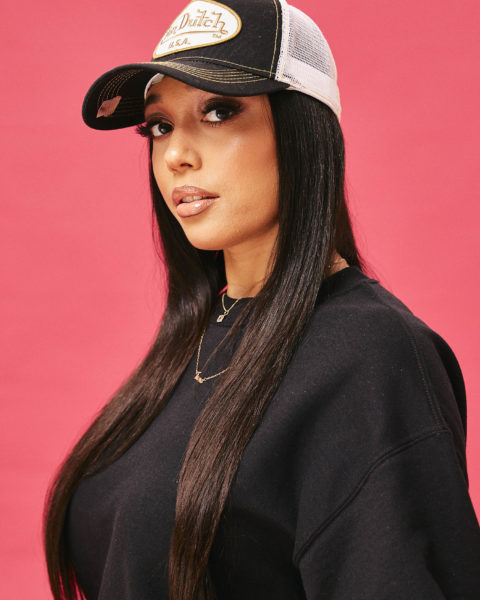 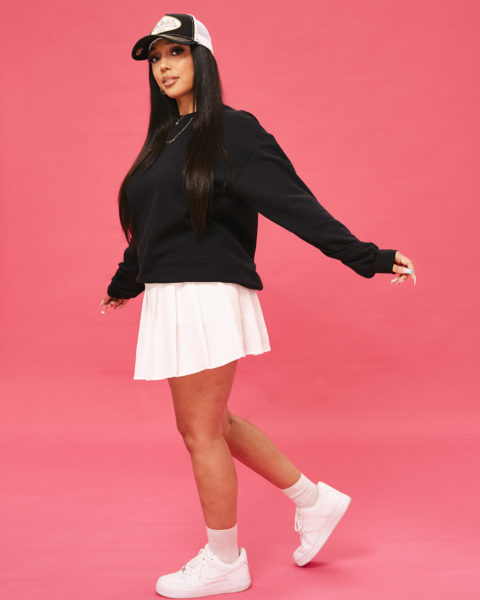 Other than love and relationships, what do you want to explore in future records?

I’d like to, at some point, whether it be a project or a song, write about my journey in music. That would be something good to write about. It consumes so much of my life and my mindset and it’s my ultimate goal. Because it’s such a big part of my life, it’s such a big inspiration to put into music.

What can you say about your journey in music so far?

It must seem like more of a reality now, right?

Exactly. Even though I’m still growing and at these beginning stages, and still learning, I’m able to do it full time.

Do you enjoy talking about your work and looking back on past tracks?

Yeah, I definitely do. It’s fascinating to sit down and look at old stuff because you really see the growth.

Do you learn anything new after reflecting on previous work?

Definitely. I think previous work reflects so much: your writing ability, where your head’s at with composing in general. Because you can look back and be like ok, I’ve progressed now, so I might not do this or I might not do this. You can definitely learn from looking back on old work. 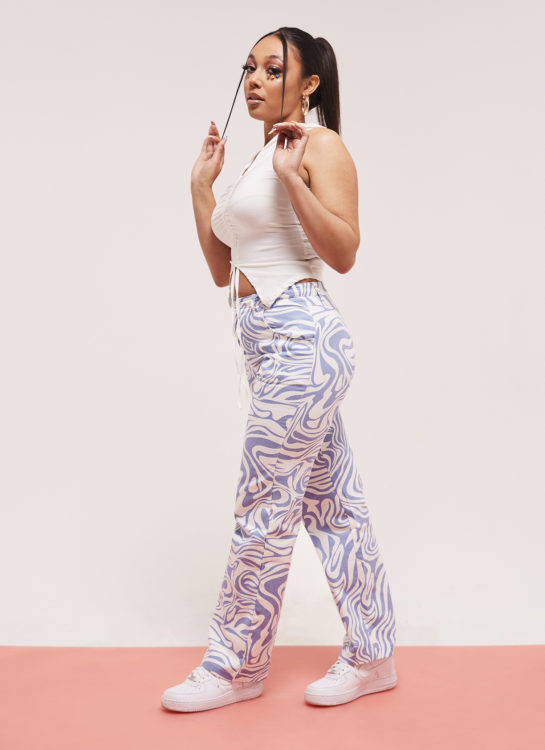 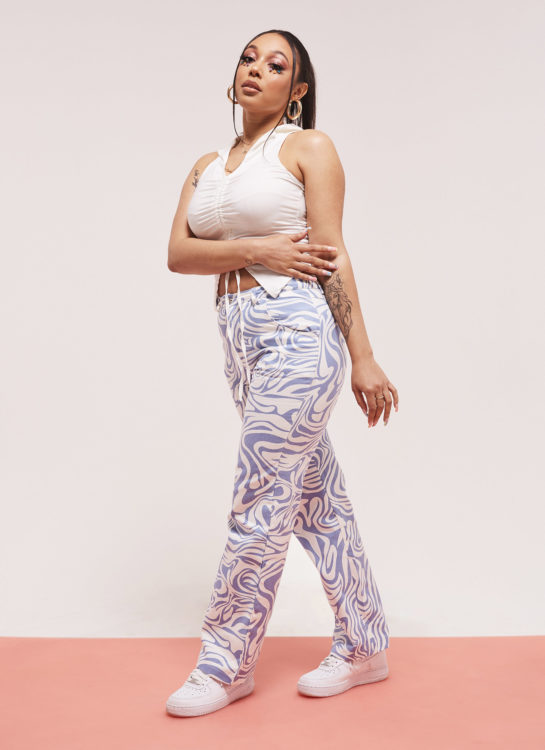 What are you excited for?

What do you want your role to be in the world?

I think we have multiple roles in the world. There are personal roles… I think you personally will be the biggest and greatest project that you’ll ever work on. I want to become the best version of me – that’s one of my roles. I want to pursue more goals within music. Those are the 2 main things: pursue my music and just become the best version of myself at the end of it.

What’s one memory of being a kid that inspires you and influences you to this day?

Is that where you fell in love with music and singing, in the studio with your mum?

I think so, yeah. Those are my earliest memories of music and that’s probably why I feel so at home when I am in the studio doing music because I was with her doing it.

What’s next for Tiana Blake?

The big goal is to feel the most natural on stage, that’s my biggest goal: to just master that. A lot of people make it look easy, but I think it’s such a hard skill to master. Even just feeling comfortable, if you think about it, it’s quite an unnatural setting – loads of people staring at you whilst you’re singing, it’s really quite unnatural. I think just tapping into the person I need to be to own it and now think about it basically.