Val Qaeda wants you to sit up and watch. She has steadily worked her way towards her well-earned status as the premier Muslim drag queen of Manchester, changing hearts and minds – and entertaining them – at the centre of the city’s queer scene.

She has described her performance style as a fusion of East and West, empowering the LBGTQ+ South Asian community through her act, whilst creating a universal appeal along the way. Her act represents the underrepresented, giving audiences a voice in a style that combines humour, empathy and classic drag skills.

Using her stage name as an impetus to get her audience to ask questions about how racial bias clouds their perceptions, she has proudly claimed the titles of “Bollywood Bombshell in a Burkha” and “Pakistani Princess” – there’s no asking permission, just the confidence to take what’s hers.

To find out more about what fuels her work, we chatted to Val about representing marginalised communities, navigating privilege and how humour is crucial to her act. 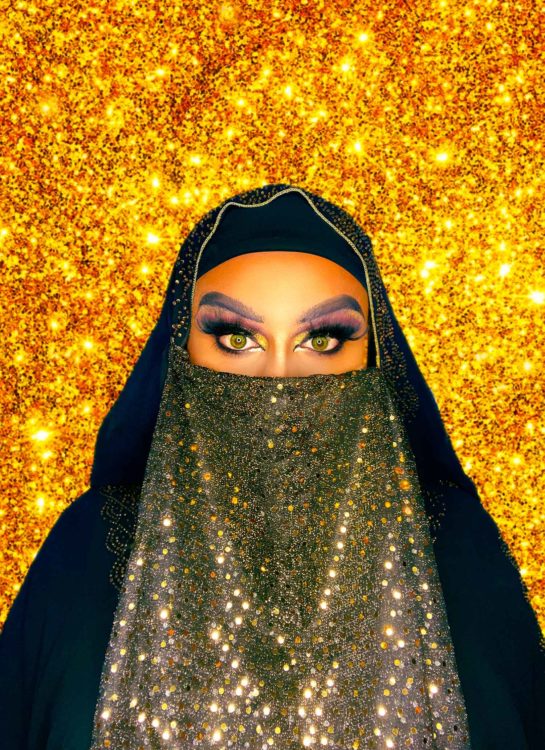 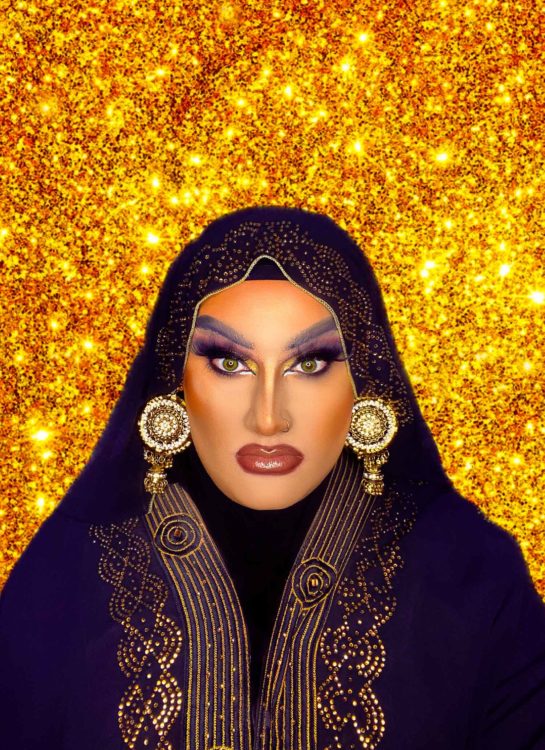 You started drag owing to a lack of LGBTQ South Asian representation – have you felt that change?

Absolutely. For years when I started drag the representation fell on me and Manchester drag legend Blaq Ivory. Only in the past two years have we seen an emergence of south asian drag artists in Manchester which is all I set out to do. Many of which started drag after seeing me, which is the best feeling.

How has the experience been of working in Manchester’s drag community?

When I first started, it was hard because I had to be the one to have the uncomfortable conversations and break down those doors. But I did so to ensure that anyone who came after me wouldn’t have to go through those experiences. I was happy to do so because I’m quite a strong minded person. I’d rather it be me than them.

How have you used humour – especially that which tackles prejudice – in your act?

I think humour is the most powerful tool that you can use to get a message across. Take my Bollywood Burkha mix for example. I used the classic RuPaul soundbite of him telling Valentina to “take that thing off of your face” and subsequently removed my burkha. By the end of the number I was throwing condoms into the crowd to promote safe sex. It was the first time I had ever been on stage and it set a precedent for my performance style. The message behind it was that women behind the burkha are just like me and you. They may dress modestly but they too have natural urges. As an audience member watching that you’re laughing in the moment but when you get home you’re reminded of it and laugh again however this time you can take a bit of time and work out the message behind it. You couldn’t do that if I just screamed “WOMEN IN BURKHAS ARE NOTHING TO BE SCARED OF THEY’RE JUST LIKE ME AND YOU”.

Have you encountered any difficulties entering traditional drag spaces?

At first and even now a lot of people don’t really know how they should react to my drag. They’re cautious about laughing and worry about if it’s offensive to enjoy my act. But alas the humour prevails and they laugh anyway. It’s all about intention, if I’m trying to make you laugh then just laugh and enjoy it. If I’m being serious you’ll be able to tell. I’m inviting you into this hidden world behind the curtain, behind the burkha. Watch. Learn. Enjoy the experience.

You hope to bridge the gap between cultures – what do you hope your audiences take from that connection?

That we’re all humans at the end of the day. We are one and the same. South Asians and Muslims aren’t these scary backwards people who want a world of arranged marriages and no bacon. We’re not a monolith. A lot of us are more conservative than the average Tom, Dick and Harry down the road, I’ll put my hands up to that. But that’s where I come in. We often keep ourselves to ourselves and stay within our community because that’s where a lot of us feel safe. Surrounding ourselves with people who share our culture simply because it’s easier. My drag allows you to take a peek behind the Burkha. You get to see the conversations we have behind closed doors. We get horny, we have sex, we like to have fun, we like sitting in front of the telly catching up on coronation street, we like to look glamorous, we like to joke around. We do all the same things you do. You just don’t get to see it. So I invite you to be that fly on the wall and see that we have a lot more in common than you think. 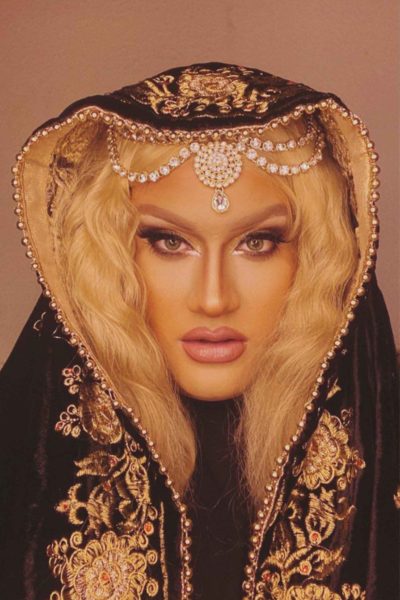 Have you had any memorable interactions with fans and audiences of your act?

I often get messages from supporters in other countries where it is illegal to be gay. They find me on instagram and they pour out their feelings and share their experiences with me. I am the first Muslim drag queen that they’ve seen and they feel represented. They thank me for doing what I do. So I use that to keep me going whenever times get tough.

You’ve talked about your male privilege – how do you navigate that as a drag queen?

I make a point of never turning a woman into a punchline. I use my drag to uplift women. After all it’s a love letter to South Asian and Muslim women. Hopefully my drag changes people’s attitudes towards them and helps people understand these amazing women.

Do you feel pressure to embody a community and represent everyone in it as a South Asian queer artist?

I do. There’s a lot of work to be done but the number of South Asian and muslim drag artists in the UK is growing at a steady rate. The more voices we have, the more chance at showing the world that we are not a monolith. We all have our own unique perspective on society.

What conversations do you feel the industry should be having going forwards?

I think when looking at ‘diversity’ in line ups we need to stop ticking boxes. If there’s four white artists and one POC on the lineup that’s tokenism. That’s not diversity. Why can’t there be 3 POCs and two white artists? Why can’t we have a performer on the line up from more than one ethnic minority? What we absolutely shouldn’t be doing is having an all white line up in 2022.There’s enough talent out there for you to avoid an all white line up. There’s no excuse anymore. We won’t stand for it. When you think of the bigger picture, having no diversity on your line ups actually stops future POC artists from trying drag. If all they see is white artists they won’t believe that this is something they could do. There’s no representation for them. The repercussions for lack of representation aren’t talked about enough.

How has Instagram helped you build and connect with your community?

It’s allowed me to connect to a global audience to which I wouldn’t have been able to do so without it. Queer people in countries where they could be persecuted for being openly queer have been able to follow my journey and enjoy my art from the comfort of their own home. I see that through the lovely messages I get from supporters across the globe. I’ve been able to help people come to terms with their identity. That’s exactly why I do what I do.

Why is it important for platforms like Instagram to create an inclusive and supportive platform for Queer Muslims?

Instagram is a global platform. It connects you to people from all over the world. A lot of queer muslims don’t have access to a physical safe space, especially those living in a country where they can be persecuted for being queer. So their only option to find their tribe is to look online using platforms such as instagram. They can connect with their community and find their support system that they can’t have in person. I’ve had multiple messages from these people who tell me that seeing me and my drag makes them feel less alone. They see opportunity. They see that they can be whoever they want to be. That’s important to protect.

What’s your hopes for the second half of the year?

I hope to continue to grow my platform and connect with my supporters and even make new ones. In turn I hope they can find each other too and create a safe space and community online and inspire each other to enjoy and experiment with drag. There’s no such thing as too much representation. I WON’T STOP TILL WE’VE TAKEN OVER THE WORLD AND TAKEN EVERYONE’S JOBS! You’ll have no choice but to listen then.