Notion 75 is all about celebrating our history. A huge part of that history are the artists we’ve featured in previous issues, many of whom reappear in Notion 75. To celebrate this, we combed through our archive to pluck out an artist that has grown in their career as Notion has. It was difficult, but one person stood out more than anyone else, the perfect combination of Notion’s past and pop music’s present; Zara Larsson.

In the space of two years, Zara Larsson has gone from pop hopeful to one of the most loved new stars on the planet. With a host of multi-platinum singles under her belt and an army of listeners well into the millions, she’s taken the charts hostage, collaborating with everyone from Ty Dolla $ign to Clean Bandit on the way. 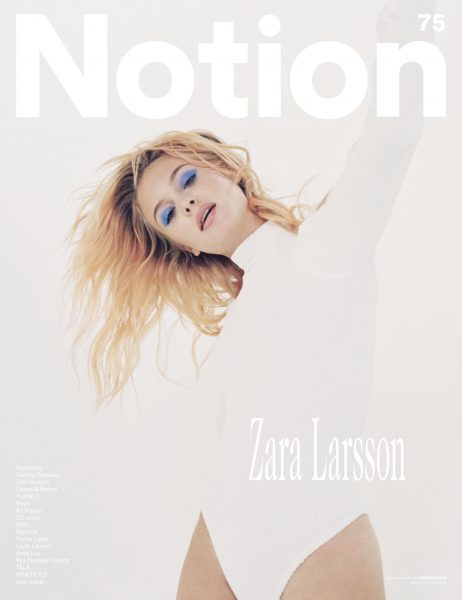 While Zara’s brand of pop is undeniably stratospheric, what the fans love most is her personality. From feminism to fame, Zara is never short on opinions and never afraid to share them. It’s what we loved most when we photographed her for Notion 72, and it’s why she was such an obvious choice to reshoot for our anniversary issue. In her cover story, Zara Larsson lets us in on her rise to international stardom, sex appeal and leading a new generation of woke pop.

Notion 75 is out now online and from all good newsagents, get your copy of Zara Larsson’s cover now.