The rush of getting a brand-new friend’s socials on tap – bathing in their grams and posts and sliding seamlessly into each other DMs – is somewhere close to falling in love, a major new film, Zola, would have us believe. Janicza Bravo’s adaptation of the infamous Twitter thread authored by Aziah “Zola” King unsurprisingly embeds not only Zola’s original text (now immortalized as a purple hardback published by A24 films) but the pings, hearts, and whooshes of social media.

A glittering gushing harp-filled musical score melds the tinkle of notifications with a soundtrack reminiscent of a 1950s romance movie. For those unfamiliar with Zola’s alleged story, while working in Hooters the young waitress was called over by Jessica, a “white bitch” out having lunch with a friend. The pair swapped socials and a DM love affair quickly ensued – although, when Jessica asked Zola to join her dancing in Florida the next day, their fleeting friendship would hurl over the edge of the cliff, plummet down for a while, and then go up in the flames of disaster.

Beneath the dazzling sheen of social media, in this story lurks the ugliness of racism, abuse, and sex trafficking. Bravo untangles the idea that a viral Twitter thread is only silly, superficial, or titillating, unpacking the social issues attached to Zola’s stripper saga onscreen. Her film explores how social media filters our everyday existence, how it can distract us from life, or be at odds with reality.

Zola’s opening frame imagines the two women in a kind of alternative dimension lit up by orange and blue bulbs, within golden walls. The pair touch up their makeup, and, in a deceptively subdued voice, Zola recites the Twitter thread’s infamous first line: “Y’all wanna hear the story of how me and this bitch fell out. It’s kind of long but it’s full of suspense.”

This is the frame that the film will return to when Zola falls headfirst into social media infatuation. A flurry of pings, whistles, and harp strings sounds off as Zola and Stefani (renamed and played by a chameleonic Riley Keough) stare adoringly into each other’s eyes. Over breakfast, Zola will ignore her boyfriend as she is submerged in a landslide of notifications, smiling to herself, holding the phone close to her face.

“Last month I went dancing at this cute spot in Florida,” Stefani reads her DM out loud, in an incantatory, almost recitative voice. Social media reaches poetic heights, Stefani and Zola’s rhythmically monotone voices and stop-in-your-tracks outfits creating a delectable façade. Theirs is a friendship forged out of bonding over online culture. As they chat IRL about their other online relationships, a sub-header reads: “I see you. I feel seen. I feel heard.” But the heart emojis quickly crumble away when Zola, Stefani, Stefani’s boyfriend and her dubious flatmate hit the road.

Not much time passes before Stefani has fully exposed her uncomfortable racial prejudices, an offensive “Blaccent” and comments about “nappy ass hair” included. Racism is a disturbing subtext throughout Zola, especially during Stefani’s encounters “pulling tricks”. Bravo has described Zola as a “white nightmare”. Taylour Paige, a former dancer but newcomer to the movie industry, was spotted inside a coffee shop and scouted to play the lead. She brings authenticity to the role of a young woman who is caught up in a mess very much not of her making. Her slightly red-around-the-edges eyes, throughout the course of Zola, expertly portray a spectrum of emotion, widening in discomfort, disgust, or fear. On Paige’s highly communicative facial expressions, revealing the emotion grounding the beyond-crazy situations Zola winds up in, Bravo says: “I felt that this was a communion I’d had, specifically with a lot of Black women — being silent, not in a space where you felt you could express yourself, but so much of what you were feeling was being expressed through your eyes and your gut.”

Bravo is careful to film as much from Zola’s perspective as from anybody else’s. Through the roommate’s viewpoint (or, in case you haven’t twigged, Stefani’s pimp’s) we see Zola and Stefani walking side by side, Stefani with a forced swagger but Zola with slightly awkward hesitation. The director took over the film rights from James Franco, whose version, she claims, was “leading with its dick.” In a film predominantly about sex work, male sensationalism and lack of interest in the female characters is a real risk. What is on offer instead is a portrait of Zola’s down-to-earth honesty, and her intense vulnerability.

Zola is radical in its explorations of how perception is shaped by social media. The emphasis placed on Paige’s facial expressions is part of the film’s grappling with the retrospective viewpoint of Twitter: Zola is constantly processing her experiences in real-time to share with her followers in the immediate aftermath. In limbo between present and past, she often interrupts the film to intervene with her own narration.

While many believe social media is merely superficial, Zola makes a pretty convincing case otherwise. Its protagonist is in some ways a victim of the fantasy posited by online existence. In one of the film’s dream sequences of sorts, before Zola is about to dance onstage, she muses over herself in the spot-lit mirror, switching between a series of equally stunning outfits. “Who you gonna be tonight Zola?” a voice murmurs – cut to her being handed a pair of tacky nipple tassels.

Stefani’s boyfriend, side-lined to the backseat, waiting in cars or motel rooms as the night unfolds, epitomizes our numbing to reality through social media. His character can be summed up as the one who watches stupid internet videos that are supposed to be funny – but actually are more cringey than laughable. “I’m just trying to distract my brain,” he explains. (The comment is maybe a foreshadowing of the mental health issues which the film suggests he experiences later – though sadly this is brushed under the carpet.) There’s certainly a lot going on to distract himself from.

Underneath the Instagrammable curated image – lime snakeskin two-piece suits and dazzling brown sequin shorts galore – Zola ends up dipping into the underground world of prostitution and sex trafficking, just about steering clear of becoming ensnared herself. Stefani, as luck would have it, is already embroiled – a perfect lesson that you can’t learn everything about a stranger from their Facebook, Twitter, and Instagram. One of the film’s most disturbing scenes, as Stefani has sex (to later be denied any payment) with a seemingly endless line of men issuing up to their hotel room, features what critic Patrick Bradshaw describes as a “penis montage”. As if this wasn’t unsettling enough, a heart emoji occasionally graces the screen during its run – a darkly humorous encapsulation of how warped our perceptions as shaped by social media have become.

The real-life Zola told Rolling Stone “I made people who probably wouldn’t want to hear a sex trafficking story want to be a part of it… because it was entertaining.” Embellishments and exaggerations merely make the truth more interesting. This is the same kind of philosophy underpinning Bravo’s film: while its gorgeous aesthetics have set Zola up as a cult hit in the making, at its core it feels pensive and truthful. On the road back from their Florida fiasco, a photogenic pink sunrise stretches across the screen, while a tearful Zola sits in the back of the car. “You know I love you,” Stefani says. A song about best friends backs the rolling credits. But the really crazy thing? They only added each other on FB – when was it? – two days ago. 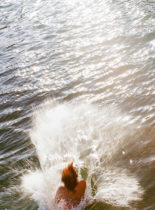 LA-based producer Plus reveals his latest experimental single “Want It All”.