“AFTER THE STORM” by Sophie Blair

Sophie Blair shares her glittery new single, "AFTER THE STORM".

Kicking off with a glitchy yet breezy opening, Sophie Blair’s new electro-pop single, “AFTER THE STORM”, is an upbeat, dance-y number that will have you singing along after just one listen.

“I wrote ‘AFTER THE STORM’ around 3am in my backyard with the guitar I got for my 20th birthday. I was living with 3 roommates at the time, all musicians, and it wasn’t uncommon for one or several of us to be up all hours of the night working on something. I had reached a point with my songwriting where I could write a complete song in under an hour. There was something that felt new and wildly empowering about that – feeling that I could grasp and channel the swirling chaos of my emotions into songs almost as easily as I could articulate them through speech”, Sophie shared.

The singer, songwriter and violinist from Provo, Utah, has always intended to follow a life of music, but growing up as a Mormon, originally intended to study classical music. After leaving the faith, however, she found a path within pop, and it wasn’t long before she was playing her own shows, festivals, and recording sessions. Sophie has since shared stages with The Killers, Bruce Springsteen, Mindy Gledhill, Train, Joshua James and more.

Listen to "AFTER THE STORM" below:

“AIR I BREATHE” by Sophie Blair 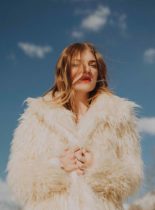 Hear Sophie Blair's electro-pop bop, "AIR I BREATHE", for the first time ahead of its release tomorrow.