Musician Charlotte Lawrence is the LA 'it' girl you need on your radar.

It’s midday, the day after Charlotte Lawrence plays her debut London show and the curtains are still very much drawn as she emerges down the spiral staircase in her hotel room. After last night’s show Lawrence went out on a bender to celebrate with her team and one of her BFFs. She got back to the The Ned—the swanky former bank turned hotel in the City where she’s crashing—and had such a big headache that she couldn’t sleep, so she decided to watch Maleficent and fell asleep crying to the movie.

Los Angeles born and raised Charlotte Lawrence is the daughter of actress Christa Miller (Cougar Town and Scrubs) and Bill Lawrence (the actual creator of Scrubs). Lawrence is still an LA girl and lives with her three dogs, including Beau the Pyrenees who is a puppy now but will eventually grow to be bigger than a human. You could say that a career in Hollywood was inevitable for Lawrence but she’ll tell you that she didn’t get a free pass just because of her parents, she’s been working at this “since little”. 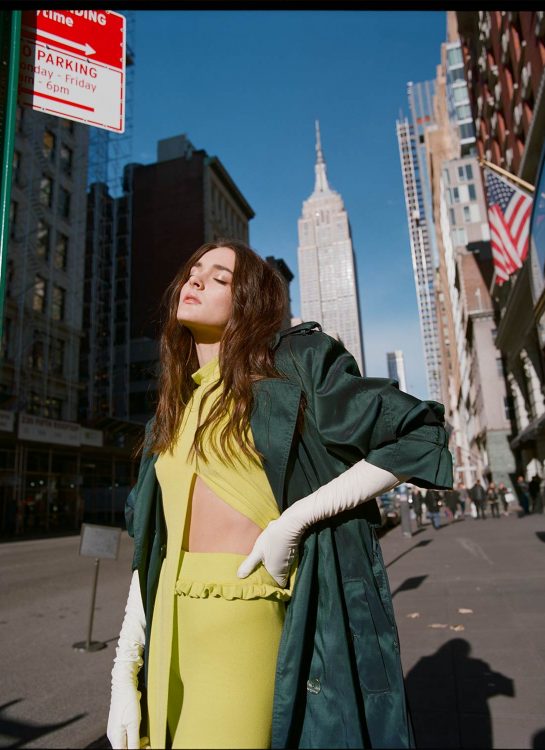 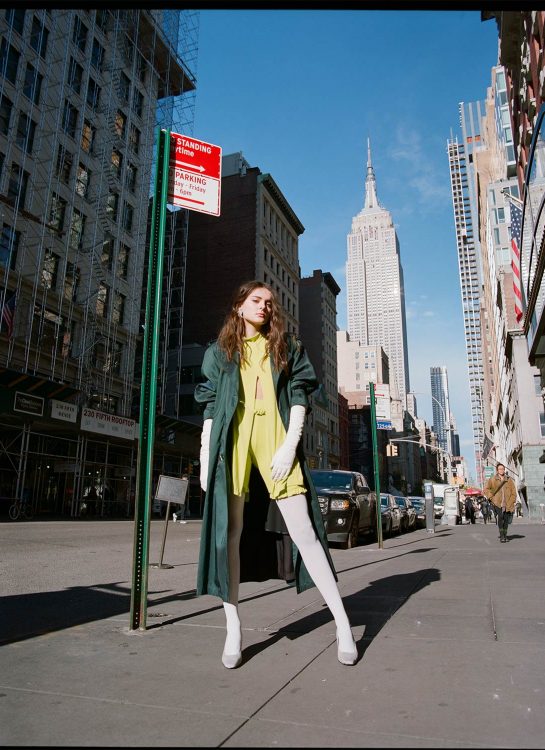 Wearing a Heron Preston NASA hoodie and eating roomservice pancakes and maple syrup, Lawrence tells it that she started singing at five years old, was trained classically in piano, self-taught at guitar and is currently learning the drums. Her parents are super creative but totally non-musical, so it was a big shock for them when Lawrence declared that she wanted to be a singer. By 11 years  old Lawrence wanted to start modelling and acting, but her parents were insistent she go to school—though they did let her cameo on an episode of Scrubs playing a younger version of her mum.

The first song Lawrence wrote was called “First Love”, she was nine years old and the first line went “You’ve crashed a ship in the sea of love / just to see what was up above / was it the sky or the look in your eyes?”. Lawrence laughs as she shares the story, calling it a “full-blown Titanic love song” despite the fact that, at that age, she didn’t even talk to boys ever. Since writing that first song she’s teamed up with Yungblud to record a track for season two of 13 Reasons Why, released her own six-track EP, featured in a Balmain campaign and scored a spot as the opening act for fellow rising star, Lauv.

Lawrence says the best thing about being a teenager is that she still has a working metabolism. The worst thing is that she “grew up very fast” and has always been around adults, so a bunch of her best friends are older, in their twenties or thirties—her Hollywood friend-set includes model/actress Kaia Gerber and Kit Keenan (daughter of Cynthia Rowley).

“I hate when people are like ‘ah but she’s only 18, she’s still a teenager’, it’s like ‘no, I know the same shit as you, I’ve been through the the same shit as you, been living this fucking Hollywood crazy ass stupid life the same time as you’. I grew up in the heart of LA and I’ve been working and following my dreams since I was literally 13 years old,” insists Lawrence. “Sometimes I’ll still be viewed as ‘oh she’s still immature she doesn’t get it because she’s still young’ and it’s like ‘no dude, you don’t fucking get it!’.” 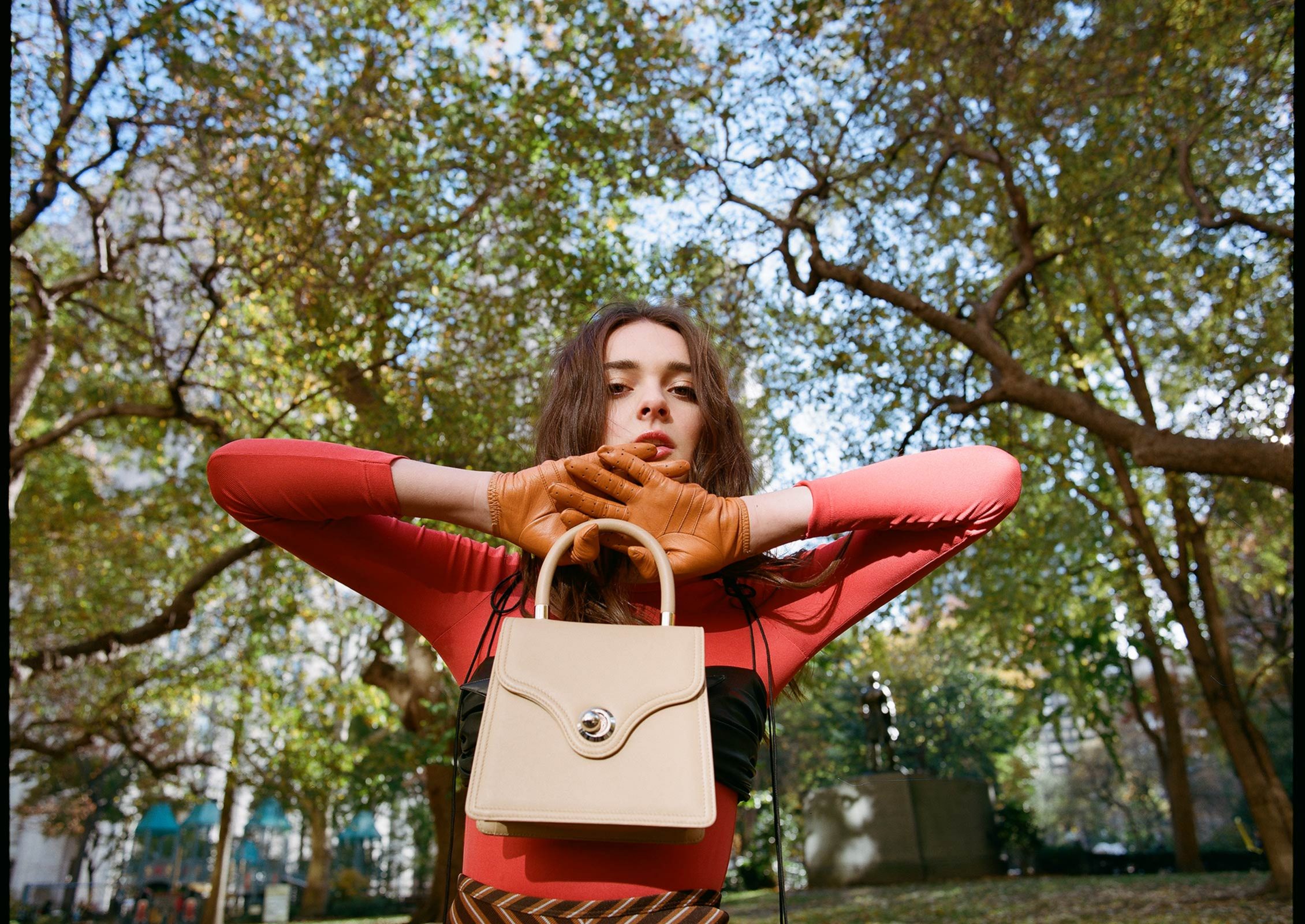 Despite the fact that her friends are all successfully pursuing similar entertainment industry careers, Lawrence says that one of her best qualities is never feeling jealous of anybody. Instead she likes to surround herself with people of that same mindset that are all about the glow up and lifting each other up. “That’s the thing about L.A.,” Lawrence says, “you’ll meet the worst people you’ve ever met in your entire life, you’ll meet the fakest, worst social climbers ever, but you’ll also meet the best people you’ve ever met.”

Lawrence wouldn’t call herself Instafamous, she thinks that title means you’re more of an Instagram model or an influencer and instead thinks her follower count is a result of people liking her music. “I’d rather be known for my music in the real world than followed on Instagram,” she proclaims as we discuss how much social media has taken over and the warped perception of reality it gives people—something Lawrence acutely aware of being on the other side of the looking glass.

“Everything’s public. Even if you don’t wanna be and I admit to it too. Everybody’s living a lie but you’re never going to post the really difficult shit on your fucking Instagram. Social media doesn’t affect me like that though, I’ve never viewed it as a lifestyle, I just view it as a marketing thing,” says Lawrence. “People in the middle of nowhere see it thinking it’s a literal reality—it’s curated.” 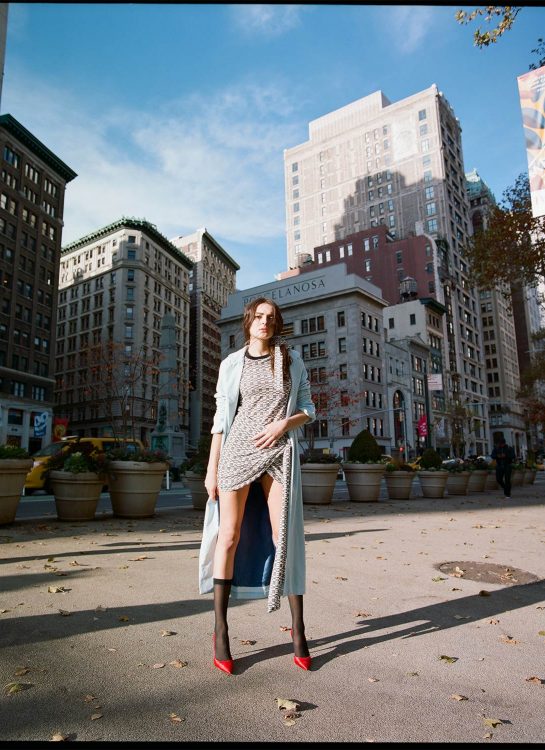 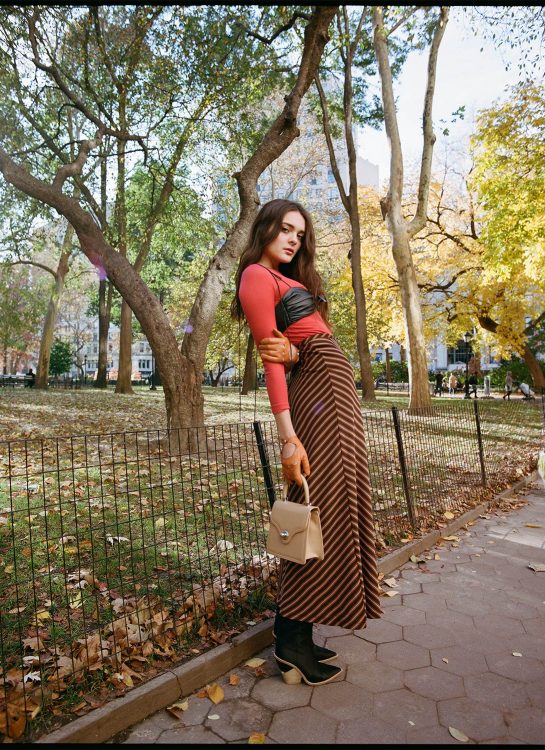 Social media doesn’t give Lawrence anxiety but there are other things in life that do and Lawrence makes a point of writing about them in her music. Take “Keep Me Up”, the track Lawrence wrote 15 minutes after suffering from an anxiety attack in which she sings lines like “You’re keeping me awake at night / I’m losing all my appetite / My heart is beating out of time / My skin is cold. My chest is tight“ directly to her anxiety as a kind of therapy. Lawrence says, “By releasing that and putting it out into the world I want people to feel the same way, to view it as a sort of therapy as well, to be able to listen to it and say I felt that, I know what she’s talking about, this’ll help me, I’m not alone.”

Anxiety isn’t the only issue Lawrence is outspoken on, describing herself as “personally and secretly very political”. Lawrence believes in gun control laws more than anything, calling it an obvious issue that can be easily fixed. Other issues like immigration and the separation of detained families are also vexing Lawrence:

“Obviously there’s many wide scale issues that are very Republican versus Democrat ideals, that we’re not gonna be able to change, then there’s the smaller issues—don’t be a mean person or don’t separate children from their families, it’s blatantly a horrible thing to do, it’s not a Republican versus Democrat issue, that’s just home wrecking. It’s time for a new president,” Lawrence proclaims.

“Hell yeah. I think feminist is a broad word—I do believe I’m a feminist but it’s another word that has a bad rep, that people will ‘strue and be like ‘oh feminist crazy, hate men’ and it’s like no I just believe in equal rights for all. But women are gonna fucking rule the world so.” 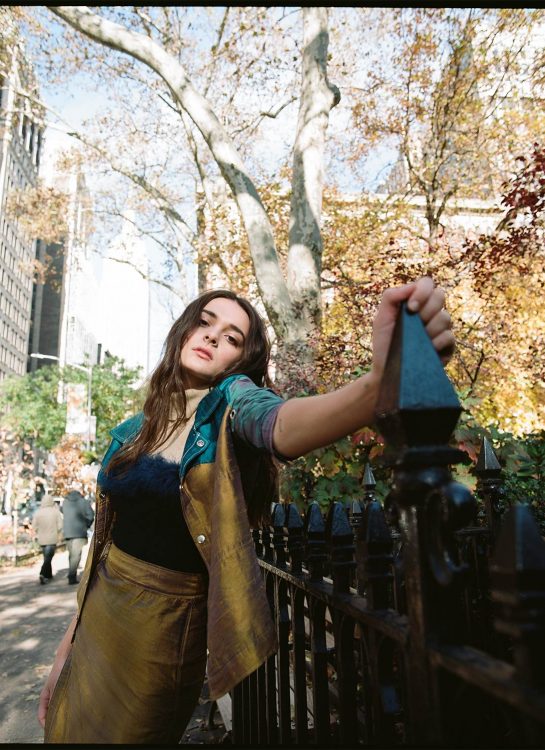 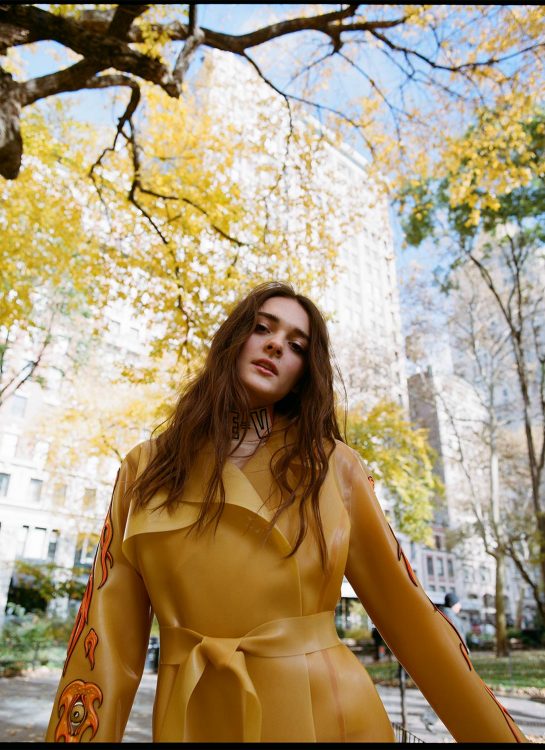 A Day In The Life With Charlotte Lawrence 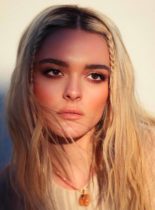 Dark-pop supernova, Charlotte Lawrence, gives Notion an exclusive look into a day in her life as she films the music video for her new song "Cowboy" off her self-titled EP.