While Tommy Newport was born in Manchester, England, at six years old his family made the move across the pond to the States, eventually settling in Wichita, Kansas. Playing the guitar to combat teenage ennui, Tommy started making music, picking up a legion of fans and millions of streams along the way. Now there’s no looking back.

Tommy Newport releases his new highly anticipated EP Liquid, leading with the track “American Scam”, which chronicles the story of someone stuck in a dead-end corporate job. Pulsing with sharp electro keys and whistling tones, “American Scam” contrasts a dynamic soundscape with its monotonous subject matter, kicking off the EP with a slightly melancholy tone. Expanding on the EP, Tommy comments, ‘Liquid in my eyes is my take on the sign of the times.’

Tommy’s talent seems to know no bounds, with the world taking note. His music has featured on a myriad of TV shows, from HBO’s Ballers to Netflix’s original series What/If and The Sinner. He’s even scored an Apple iPad ad campaign. Keep an eye out for Tommy Newport as this star continues his unstoppable rise. 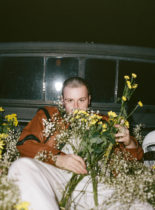