Manchester-born but US raised, Tommy Newport has been known for his infectious indie tunes since debut ‘Just To Be Ironic’ in 2018. Although still only 21, he’s had a string of EP’s and toured extensively across America and Europe, whilst picking up millions of streams in the process.

After settling in Kansas at a young age, Newport learnt guitar whilst also learning to produce music on his computer. Garnering his own brand of of psychedelic pop, he cites musical inspirations from early 2000s bands like MGMT and The Killers. Their sounds can be heard in his catalog, a catalog originally released independently by the artist.

The artist’s latest single “Calabasas” is classic Newport, combining groovy laid-back rhythms with powerful bass and smooth vocals. Discussing the track, he shares, “Calabasas for me is a Western, Bond, Tarantino cinematic inspired record. I wanted to create the soundtrack of that classic lead character in a thriller. The lyrics portray a protagonist who feels the world is waiting for them but they haven’t got the time or patience to be waited on, and fears the realities of finally meeting their wishes.” Having already been championed by the likes of Zane Lowe & Giles Peterson, as well as collaborating with Grammy nominees EARTHGANG, this years looks set to be another big one for Tommy Newport. 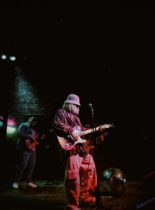