2021 was another banner year for British TV, and the BAFTA awards this year recognise the breadth of achievement on display.

Atop the nominations was Russell T Davies’ acclaimed drama It’s A Sin, which chronicled the lives of a group of friends amidst the AIDS crisis of the 1980s. The miniseries scored an impressive 11 nominations, including for drama series, direction and writing, as well as nods for the performances by Olly Alexander and Callum Scott Howells. Fellow success stories includes the miniseries Landscapers starring David Thewlis and Olivia Colman, which scored seven and the Channel 4 TV movie Help staring Jodie Comer and Stephen Graham, which scored six.

The awards commemorated TV from both at home and abroad, so there was room for honouring the acclaimed HBO miniseries Mare of Easttown, for which lead Kate Winslet received a nomination, and Succession, which faces off against the likes of Squid Game and Call My Agent in the international series category.

Original British comedy was also honoured, with the now-traditional nods for Sex Education, including for Aimee Lou Wood and Ncuti Gatwa’s performances, as well as critically acclaimed shows such as Starstruck, We Are Lady Parts, Stath Lets Flats and This Way Up.

Other stories from the nomination included Stephen Graham notching two acting nods, for his lead role in BBC prison drama Time and his supporting role in Help, to match the nomination he received from the film BAFTAs earlier this year for his role in Boiling Point.

The BAFTAs are set to take place at London’s Royal Festival Hall, hosted by Richard Ayoade, on 8 May. They will be preceded by the craft awards on 24 April. 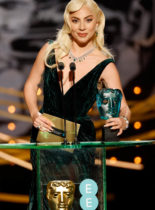