“Dancing Under Lights” by Ruby Duff

Rising star Ruby Duff graces us with an enigmatic and dazzling release 'Dancing Under Lights' which was actually seven years in the making...

Everyone is waking up in the world feeling purposeless and monochromatic, which is completely understandable given, y’know, the state of the world right now.

However, Ruby Duff is here to inject some much-needed colour and energy into your day with the release of her stellar and odd (in the best ways) new track ‘Dancing Under Lights’. With Ruby’s idiosyncratic vocals and contagious energy, you can’t help but feel like you’re being pulled to get up as the track starts and a wave of easiness washes over you.

What’s so refreshing about the alt-pop queen in the making is her otherworldly and celestial approach to her craftsmanship that ultimately leaves the listener coming back for more and more.

The best way to describe this track is when you are walking through the festival gates in the summertime and the air is warm and everything is all good. We can hope for that next year, but at least we have ‘Dancing Under Light’s by Ruby Duff until then! 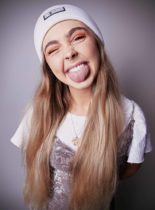 Navigating through a new dreamscape, Ruby Duff shares her latest whimsical single “Zoom” and chats about what we can expect from the budding artist.