Championed by the press, often hand-picked across Spotify playlists, and one of our own favourite Island Pop artists to keep an eye on, Navy is making a massive comeback.

This month, the Dominican artist releases not only a vital new single “Diamonds” but her ‘BLEU’ EP, which counts among its tracklist former hits “One Shot” and “LMK/ Tower”. Nurtured by the Pretty Boy Worldwide label and community, Navy has been encouraged to draw on far-reaching Caribbean influences. She often sings in Creole, a historically important language. Her latest, “Diamonds”, is enriched by hip hop, reggae, and soul influences, but this time with serious impact – marking an important turn in the artist’s discography.

On her freshest single, Navy has said: “’Diamonds’ is a radical hip hop hymn where I look at the historical abuse of black people and the lack of value they held to the oppressors. In the song I call on the ancestors for protection and retribution for the people wrongfully murdered and abused whose precious lives meant less than… I see the oppressed to be more precious and more valuable that any diamond of any value. The chorus being in creole is a direct link to the African Slave Trade which is part of the Caribbean’s history, showing how the resilience of the slaves still carries on in language today. Though it’s a lament, it’s a symbol of strength and will to survive.”

With ‘BLEU’ on its way, we can’t wait for what this diamond-of-an-artist has in store.

Watch the music video for "Diamonds" below: 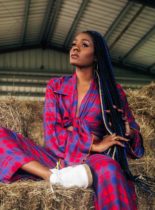