Drax Project Are Beckoning In The Long-Awaited Summer

Starting out as music students busking on the streets, Drax Project, consisting of Sam Thomson, Shaan Singh, Matt Beachen and Ben O’Leary, have grown to become one of the biggest groups to have ever come out of New Zealand. Through their own headline tours and international festival performances, the band have established themselves as a must-see live act. With standout out track “Woke Up Late” featuring Hailee Steinfeld, their self-titled debut album has collected over 300 million streams worldwide and 15 Platinum certifications to date; the band is looking to continue their surge to the top of pop music in 2021.

Following their previous genre crossing release “Firefly”, which saw the boys team up with Fetty Wap, Drax Project’s latest track is the perfect summer soaked anthemic pop song to get you excited for better times to come. Centred around a luscious Spanish-influenced guitar line, “Over It” continues the introduction of R&B elements to a pumping beat fused with the track’s soaring vocal hook.

Speaking about the song, the band said: “It’s about wondering why this person keeps coming back after you ended a relationship. You’re trying to get over them, but you still vibe with them so it’s hard to let go.”

Notion caught up with Drax Project to discuss what the biggest differences between living in LA compared to Wellington are, how their new single came about and what it was like to play a live show again. 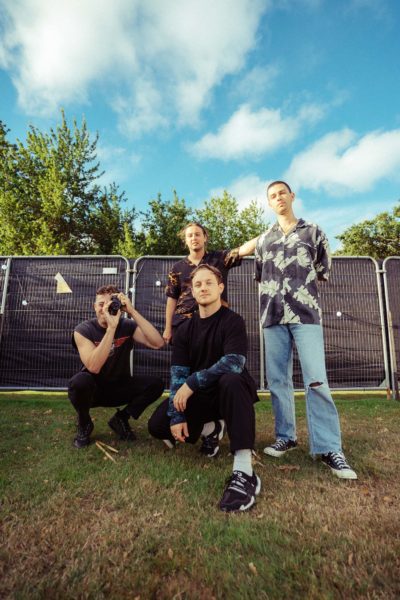 What are some of your earliest memories with music and were there any particular artists that were played around your houses growing up?

The four of us began our musical journeys as youngsters in a bunch of different contexts. Matt went to music and movement classes as a toddler and Sam was watching his Dad play trumpet in Jazz Bands etc. It’s fair to say we all gravitated towards music early on and began taking music lessons around age eleven – on average. A lot of Jazz and older stuff was played in our respective households!

When and where was your first live performance together as a band? Can you remember how it went?

The ‘Band’ started busking in Summer ’13 on the main drag in Wellington, NZ. At that point it was just Matt & Shaan (Drums + Sax) who were playing loud, iconic covers on the street. We often ended up with big crowds surrounding us and creating our own nightclub in a way. After Sam joined the band shortly after on Bass, Ben joined on guitar after the three of us had played a year’s worth of bar and small club gigs. Our very first gig with the four of us was at an iconic Wellington venue called ‘Mighty Mighty’ which is now closed down. We would’ve played an 80/20 split of covers to originals at that show!

How have these times changed your music, your approach to the creative process or as a band as a whole?

I think it’s given us a sense of appreciation for the people who have supported us for so long. When we look back at all the shows we’ve done, there’ve been people supporting us even since we were busking without a proper band name! In terms of the influence on the creative process, from the beginning we’ve loved entertaining people so maybe that mindset has filtered into our writing process? It certainly remains the biggest part of our live show – it’s always been high energy and we don’t want that to change.

What are some of the biggest differences between living as musicians out in LA compared to at home in Wellington?

There are 1000 times more venues, artists, studios and general music related things in LA which meant we had physical proximity to world class producers and songwriters etc. We were lucky enough to form great relationships with some of these people who continue to help us now – although over Zoom. Wellington will always be home though and we may have got a little homesick while we were in LA for most of 2019.

Can you tell us a bit about your new single ‘Over It’ and how the track came about?

Funnily enough, we wrote the song in LA with some dudes we’ve worked with before (Brandon Colbein and Jordan Palmer). It started like a lot of our songs, with the guitar riff, which we started spitting melodies over. We’ve gone back and forth with Jordan (Producer) with production since then, and now it’s the first track we’ve released that is officially co-produced by us. It’s about that feeling of someone dragging you along and playing games with your emotions, but maybe there’s a part of you that isn’t so mad about it? We wanted it to be super dancey to reflect our sound as well and we’re stoked with how it came out.

You’ve previously collaborated with the likes of Fetty Wap. Are there any other genres or styles of music you’d like to experiment with in the future?

Our musical taste is so wide as individuals that there are no real boundaries. Shaan has been getting really into Burna Boy and Wizkid etc which would be fun? It’s so generic, but between the four of us, we genuinely like everything.

Who would be your dream collaborator for a song, past or present, and what would the song be about?

Justin Timberlake. We would’ve played our version of ‘Cry Me a River’ at every show/busking session/gig since 2013. There’s something about his music that we all love and we’ve got no idea what the song would be about – but it would be great.

Now it must be pretty impossible to put into words how it felt to perform to audiences once again, but can you just talk us through what the day was like leading up to your first live show return?

After 2020 where we played no shows for the longest time ever, we were itching to get out there again. We decided to play at the spot we played days before lockdown took hold of NZ, at Blackbarn in Hawkes Bay and it was unreal. The energy from the crowd was something else and we felt a real sense of gratitude to be in NZ. We’ve got a whole new appreciation for everything about shows.

What’s one aspect, besides performing, that you’ve really missed about touring?

Exploring new places. Similar to the previous question, we’ve got a new perspective on the world and how lucky we were to be able to explore and go to all of the amazing cities in 2018/2019. When we get to do it again we’ll be soaking it up ten times harder!

Is there a venue, event or country that you’re particularly excited to play at one day?

After being at Coachella in 2019, that’s very high on the bucket list. It’s one of the most iconic festivals in the world and we were lucky enough to have artist passes when we went, which meant we weirdly did an interview with a media outlet that thought we were playing. Definitely put us on the spot when they asked how excited we were to play tonight.

Listen to "Over It" below: 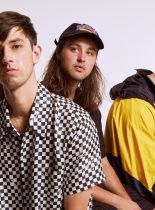