Eliza Shaddad channels Hole and the spirit of grunge in the 90s-tacular video for Just Goes To Show.

Across the worlds of music and fashion, the 90s revival has been in full swing. From Hackers-esque cyber style to the constant churn of 90s inspired R&B artists clogging up Spotify, it’s like the mid-2000s never happened in 2018. However, for all the naval and shoegazing that’s been going on, grunge, a core part of the 90s canon has been neglected, overlooked in favour of the now ironic glamour of the decade.

On her new single ‘Just Goes To Show’ Eliza Shaddad aims to change all that. A warm slice of grunge-pop, ‘Just Goes To Show’ is an expertly crafted homage to the period, drenched in spacious reverb, looping vocals and the kind of washed out aesthetic that would make Black Francis proud. The video for the track, which premieres on Notion today, is as much of a transplant as well, styled in the vein of Hole with Shaddad at prom in an over the top 90s prom dress, singing to the camera in soft focus. Directed by Patrick Taylor, it’s so well executed that if we didn’t know better, we’d be sure that the whole thing was an overlooked 90s classic.

Watch the video below and catch our interview with Eliza after the jump.

Hey, I guess every break up I’ve ever been part of.

There’s a definitely grungey/ 90s vibe to it. Who are your favourite 90s artists?

Bands like Hole and Skunk Anansie, Portishead and Rage Against the Machine, and solo artists like Tori Amos and Jewel.

How involved were you in the video?

I had a huge desire to make a video set at a prom for this song; every time I listened to it I could just picture slow dancing, balloons, corsages, and an outrageously big pink fluffy dress, so that’s how it all began.  I felt like the song is something pretty different for me so the video could be too, and I felt like it would be really fun to play about with something a bit nostalgic and tongue in cheek.

We found an amazing director in Patrick Taylor, who assembled an utterly brilliant crew, and then we basically had a pretty fun and straightforward time making it.  I helped a bit with sourcing clothes (raided my mum’s 80’s wardrobe), and extras (there’s a bunch of my family in it) but the wardrobe and hair and make up teams were incredible and had everything covered really.  There was a lot of balloon blowing up on the day and a bit of fun venue decorating too.

You travelled around a lot as a kid, where have you lived?

Have any of those places had an impact on your music?

I think they’ve probably broadened my ear a lot; hearing so many different styles of music.  But also think they opened me up as a human; I want to find a way to communicate with everybody.

Who are the Glasgow Boys and how are you related to them?

They were a really progressive group of Scottish Artists active during the late 19th Century, they wanted to see more realism and naturalism in art, and my Great Grandfather James Paterson was one of them.

Girls Girls Girls is a female-led collective working to put on beautiful and open-minded cross disciplinary arts events across the UK in support of anti-FGM charity Orchid Project.  Myself and fellow musician Samantha Lindo set it up nearly 7 years ago in response to how we were finding being female musicians in London, also inspired by how excited Sam felt after watching Beyonce headline Glastonbury with her all-female band.

What can you tell us about your new album Future?

It’s 41 minutes long. It’s out 26th October.  We’re touring it in the UK and Europe this November and December, and you should come along! 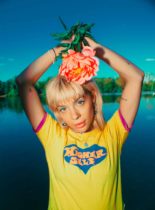 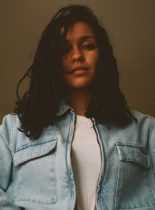 Eliza Shaddad takes us on a journey with her melancholically nostalgic single ‘Girls’ via Big Indie Records.