“Fake It” by Sarah Tromley

Sarah Tromley is pretty new to the scene – but she has a team of musical powerhouses behind her: Lilian ‘Lita’ Caputo and Jelli Dorman co-wrote her debut single, the team who have also previously given a helping hand to Lil NasX, Megan Trainor, Normani and more, while Aaron Reid and Kanye West-collaborator Ethan ‘SUTL’ Robinson produced the track.

Tromley has said: “This track came from the idea that we as women are forced to ‘fake it til we make it’ in so many parts of our lives, including sex… that it’s almost freeing when you find something that’s real. The first time you no longer have to fake it leaves you chasing a high of authenticity. Real emotion. Feeling alive. We need to feel safe and loved enough to show up as our truest selves in all aspects of life, especially in the bedroom.”

“Fake It” is a short and sweet single sure to make you want more. We’re hoping it’s just a taster of what’s still to come from Sarah Tromley.

Listen to "Fake It" below:

“One Step” by Sarah Tromley 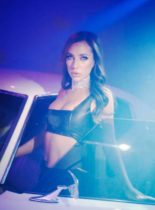