Following the release of her bouncy new track "Same For Me", rising pop star Emilia Tarrant talks Notion through her musical firsts.

Emilia Tarrant always knew she would be a musician one day. Ever since she started playing the piano at age twelve, Emilia got a keen taste for songwriting and has been writing ever since. Growing up listening to The Kings of Leon, Foals and Jack Johnson on her parents’ stereo, Emilia has followed in the footsteps of her musical heroes, amassing over a million streams and counting on her first EP.

Her songs have been met with critical acclaim, with her first ever release played on the behemoth reality TV show Love Island. Emilia has also landed coveted spots on Spotify playlists such as ‘New Pop UK’ and ‘NMF’.

Now, the rising pop talent is back with her latest track “Same For Me” coursing with her signature effervescent sound that caught fans’ attention in the first place. Emilia’s dainty vocals deliver heartfelt emotion on her latest pop track, with the singer explaining: ‘The song is about supporting the ones you love at their lowest moments, even by taking on the simplest of errands, and knowing that they’d do the same for you. My person has constantly done this for me, and that is something I’ll forever be grateful for.’

To celebrate the single (and the upcoming music video set for release on the 21st of July), Emilia talks Notion through her musical firsts. From the first festival she ever played, to the first CD she ever owned, we get to know the star-on-the-rise. Dive in!

I wrote my first song the first time I ever touched a piano… it was called something like ‘River’ and looking back it was probably awful, but to be fair, I was only 11 at the time! Haha

First song I released officially was a cover of NF’s “If You Want Love”. It somehow made it onto Love Island which blew me away considering it was my debut release!

‘Progress’ by Take That. Used to scream out the lyrics of ‘The Flood’ with my childhood best friend every time she came over.

The first time I touched a piano 🙂

First festival I went to was Reading, and the first I played was Victorious in 2019!

Honestly, I think the first and most continuous obstacle in my career has been trying to promote myself on social media. I absolutely love the different platforms, but the algorithms and trends put so much pressure on us as artists to go viral and ‘make it’ via social media nowadays. I feel like I spend half my career on it instead of actually writing and recording music!

A recorder! In primary school! Didn’t everyone learn the recorder though?

Never. I don’t think I could give up on my music!

Must have been when I went in for a writing session with Joe Keogh from Amber Run. My boyfriend and I have loved their music for so many years, and couldn’t believe it when he wanted to write with me!

As a teen, releasing music in itself was a huge bucket list goal for me. I had always dreamt of sharing my music with the world, but never thought it would actually happen! I’m living my dream!

Listen to "Same For Me" below:

“When It Was Chaotic” by Emilia Tarrant 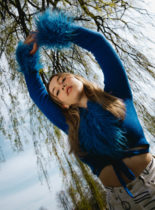