“When It Was Chaotic” by Emilia Tarrant

What is better for creativity – chaos or quiet? It’s a question that rising 20-year-old pop star Emilia Tarrant tackles head-on in her new single, “When It Was Chaotic”.

Produced by Will Hicks, who is best known for his frequent collaborations with Ed Sheeran, the single tackles the struggle Tarrant faces with her mental health in the process of creating and comes to some surprising conclusions. With Tarrant’s ethereal vocals as the throughline, the song charts a path through melancholy towards personal resolution in a catchy yet thoughtful pop style.

It’s accompanied by a music video that emphasises the song’s themes of solitude, placing Tarrant in a theatrical space where she’s forced to work through her personal struggles alone and come to find a sense of fulfilment in performing her deepest emotions.

On the track, she says, “I am absolutely buzzing to be releasing ‘When It Was Chaotic’! I wrote the song in a period of my life when I had continuous writer’s block. At the time I was so consumed by the chaos of my mental health, and on the other hand, how it continuously numbed my mind. As someone who writes songs based on how I feel, there is nothing worse than feeling numb and having nothing to write about… So ironically, I wrote a song about not being able to write songs! I think a lot of people who struggle with mental health day to day can understand how feeling something, even if it’s uncontrollable and endless, is better than feeling completely functionless. This song really captures the direction of production and songwriting I’m going for this year, and with help from producer Will Hicks, we have developed it from a slow piano ballad into something much more energetic and exciting.”

Catch Emilia Tarrant live throughout May: 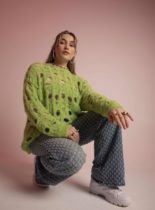 Following the release of her bouncy new track "Same For Me", rising pop star Emilia Tarrant talks Notion through her musical firsts.