Ella Isaacson is happy to let her filter down. Born in New York and immersed in the arts from a young age, Isaacson gravitated towards poetry and the spoken world as a way to make sense of all life’s messy feelings in all their contradictions. Helpfully, she has the voice to make music from them.

She’s accrued impressive success with her confessional and introspective style of songwriting, such as her breakout hit “Ruins” with its top-ten position on the US Viral Charts on Spotify, and recent “Life of the Party” which was featured on a handful of Spotify’s handpicked playlists. Her song “Expectations” was given a prestigious – and highly successful – remix by R3H4B, which has racked up four and a half million streams and counting on Spotify.

Her latest single, “Four Letter Word”, is another major statement of intent. Concisely running at less than two and a half minutes, the song effortlessly mixes tranquil, folk-inflected acoustics with a hint of pop grandiosity, with Isaacson’s crisp vocals powerfully illustrating the surge of emotion she’s just barely holding at bay. It’s pop that’s content to move at a slower, more thoughtful pace, and it’s all the more powerful for it.

On her songwriting style, Isaacson says, “I’ve always been an over-thinker, it’s my curse and my blessing,” she explains. “I’m not sure if there’s a moment where my brain really rests”. It’s clear that she’s found the perfect way to put that restlessness to use.

In Conversation: Ella Isaacson and R3HAB 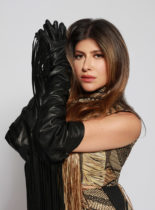