Leeds trio Gotts Street Park have just dropped their 4-track ‘Diego E.P.’, a jazz-inflected, instrumental record that they told Notion takes inspiration from cult movies such as The Godfather and the works of Japanese film director, Yasujirō Ozu.

Serving up a contemporary take on a retro sound, the record is truly cinematic and transportative. Listening with your eyes closed, you get utterly lost in the music – something that is increasingly rare these days. Someone get these guys to soundtrack a movie – stat!

Formed of Josh Crocker (bass, production), Tom Henry (keys) and Joe Harris (guitar), Gotts Street Park have previously worked with BRIT Rising Star winner Celeste on her ‘Not Your Muse’ and ‘Compilation 1.1’ albums and ‘Lately EP’, as well as having a track featured on the Rocks movie soundtrack.

The collective chatted with Notion about their stunning new EP and created an exclusive mix too. Dive in!

What was your starting point and inspiration for your single “Diego”?

“Diego” was a loose jam in-between catching takes for a more ‘structured’ tune we were working on with a vocalist. When we’re recording something that requires a lot of concentration sometimes we’ll just break it up and jam something new to refresh ourselves. I guess a lot of the energy came from that spontaneity.

You’ve talked about your music being an urban soundtrack to your home in Armley. How do you go about capturing the feel of a place in your music?

I don’t know if we actively try and do that but undoubtedly music is heavily influenced by the place it’s made. We’ve always been interested in the visual element of our music and our earlier releases were a lot darker and you could say reflected the landscape of where we lived and recorded but I wouldn’t say we set out to do that necessarily. It’s probably more of an unconscious thing.

Yeah, we’ve always felt our music had a cinematic quality to it and it’s usually after we’ve created it that we imagine its placement in a movie or whatever. So it’s not a soundtrack process where we take inspiration from a scene – but rather that a song will remind us of a scene after the fact.  We would love to score something directly though and also explore that as a means of inspiring new ideas.

What do you feel different vocalists, from  Pip Millett, to Celeste, have brought to your music? Which were your favourite to work with?

It’s hard to pick favourites; each collaboration moves in its own direction and that’s why we enjoy it so much. Some directions aren’t to our taste, and we’re pretty strict with what music sees the light of day. I think each vocalist can definitely emphasise pockets of our own sound. A lot of this is a response to them when they’re in the room and it allows us to explore and be quite eclectic I guess.

How do you decide which vocalists to collaborate with on your tracks?

All three of us have very similar tastes. 9 times out of 10 if one of us likes something then the other two will too. That’s made things quite straightforward for us when it comes to picking collaborators. Sometimes we’ll find someone new and reach out to them but often we already know these artists as we work with them for their own projects or we have a connection through someone else. We’ve never paid for a feature and I think there’s something much more honest when we use people who are in our circle or just when there’s a mutual respect for each other’s work there already.

You’ve said you emulate an old-fashioned improv-style recording method. Did lockdown have an impact on this?

Not hugely. As we have access to our own recording space we weren’t really relying on studios being open etc. It may have affected the process a little in terms of writing with artists in the room though. Our track with Rosie Lowe was made with her remotely over lockdown and the new EP had other overdub elements added to it post the initial recording process.

What do you hope listeners will take from your music?

Sometimes I see comments or messages from listeners and one, in particular, comes to mind on the Celeste track “Both Sides of the Moon”. This kid loved it so much but was dying to know what the genre is so he could find other similar music. He mainly listened to trap. I see that quite often. It’s quite easy to forget that the younger generation may have never heard music that was recorded or produced in the way we make music and I think it’s really cool to be able to bring people into new sonic worlds like that and hopefully inspire them along the way.

To make music we love the sound of and hopefully amongst some of the retro aesthetic there’s a forward-thinking creative thread in there. There’s definitely a distinct recording philosophy. In terms of a musical philosophy, we try and push the writing to always be interesting and to always maintain integrity. We’ve never sat down to write and thought ‘right we need a single’ for instance. Or we need to get this or that person on a track because their numbers are good or whatever. We try and separate ourselves completely from the industry side and let the music dictate.

What can we expect from the upcoming EP?

It’s more of a departure from vol 1 & 2. You can hear us exploring different studio processes, letting loose, composing on the fly – but also hear us overdubbing and structuring certain parts a lot more in the way a beatmaker would – which is mainly due to lockdown issues.
Notion Magazine · Gotts Street Park x Notion Exclusive Mix

“Where You Going” by Gotts Street Park feat. Marco McKinnis 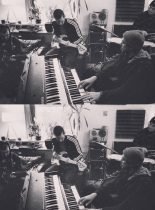 Leeds based four-piece Gotts Street Park transcend time with their soulfully authentic production, in their new track ‘Where You Going’ featuring the honeyed vocals of Marco McKinnis.