Green Man Festival once again unfurled onto the Brecon Beacons’ sweeping green pastures this summer for its 18th edition – the first since the pandemic hit. Boasting a genre-spanning line-up, its 20,000 strong crowd was made up of die-hard music fanatics, late night revellers, and flower-crown-adorned families alike.

The festival opened with astounding energy, kicking off with a set from newbie band (but already a festival favourite) Wet Leg performing tongue-in-cheek tunes, followed by a keep-you-on-your-feet gig with jazzy four-piece Lydian Collective, and a later show from hip hop group Lazy Habits which pulled no punches and riled up the Chai Wallah crowds. Thursday’s highlight was without a doubt Tom Excell’s afro-jazz collective Nubiyan Twist, whose pulsing performance at the Far Out stage was exactly the trick to get festivalgoers geared up for the weekend. Working Men’s Club, a synthpop staple, were also scheduled for the evening, though the group were a little slow to get into action and meanwhile had lost the attention of the Far Out stage throng. Tirzah was the first night’s ethereal headliner. Her performing live amped up the drowsy, mesmeric feel of her recorded work, adding a further layer to her slouchy single “Today (with Tirzah)” and the slurring, intoxicating “Gladly”. It was an otherworldly performance that felt ephemeral as smoke, a narcotic, hypnotic set to lose yourself in. 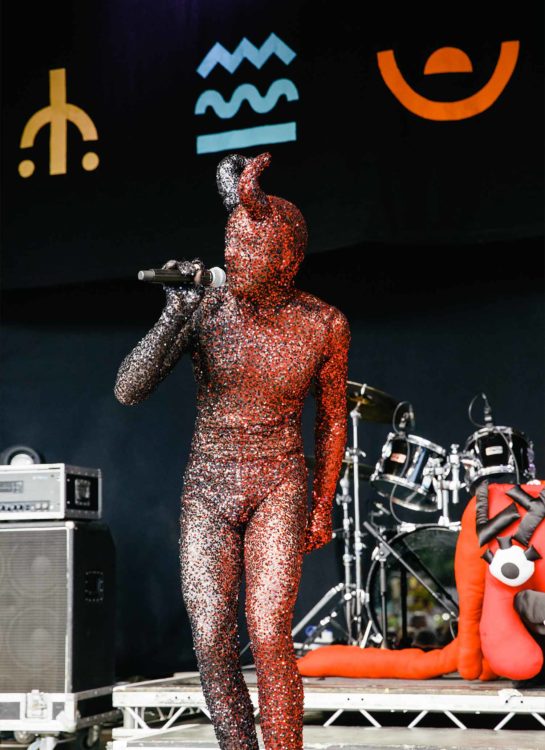 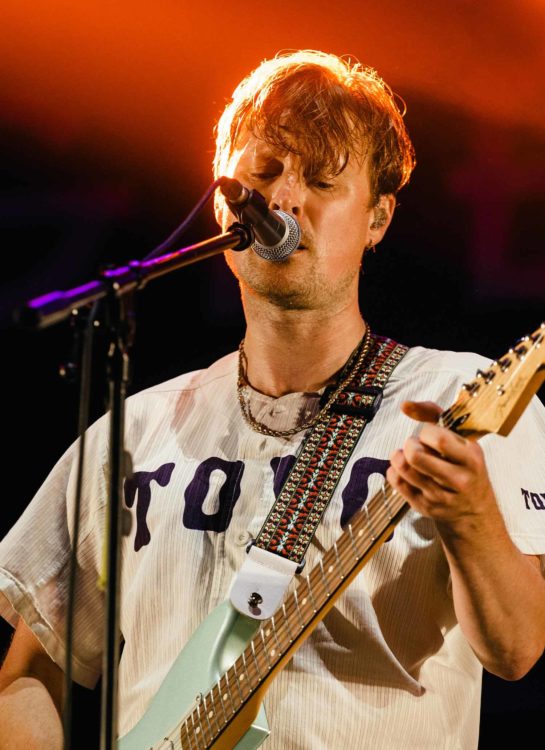 Friday set a precedent for this year’s particularly fierce rock offering. Honeyglaze and Fenne Lily charmed listeners from within the stony enclave of the Walled Garden, while Buzzard Buzzard Buzzard provided plenty of head-bangers and Wu-Lu gave a thunderous performance with nearly the weather to match. Welsh indie rockers Boy Azooga was another of our favourites, whose polished, moveable rock felt fitting for the Mountain stage’s short spell of sun – with a blustering follow-up from Nadine Shah. The bright shiny cherry on the top for Friday was a stellar performance from alt-RnB artist Greentea Peng, who brought a little sass to the stage and had crowds utterly under her spell. Her set was followed by a blow-away headliner slot from Canadian artist Caribou, who bring dance and solar electro-pop together with an ever-so-slightly folksy (and very Green Man) feel – set against stunning graphics of a rising sun. They returned to the festival with a brand new song up their sleeve which had crowds in raptures. There was almost too much to choose from: elsewhere, the multi-talented artist and drummer Georgia was keeping listeners enthralled. A late-night set from DJ-producer Ross from Friends was the perfect final touch on a jam-packed Friday line-up. 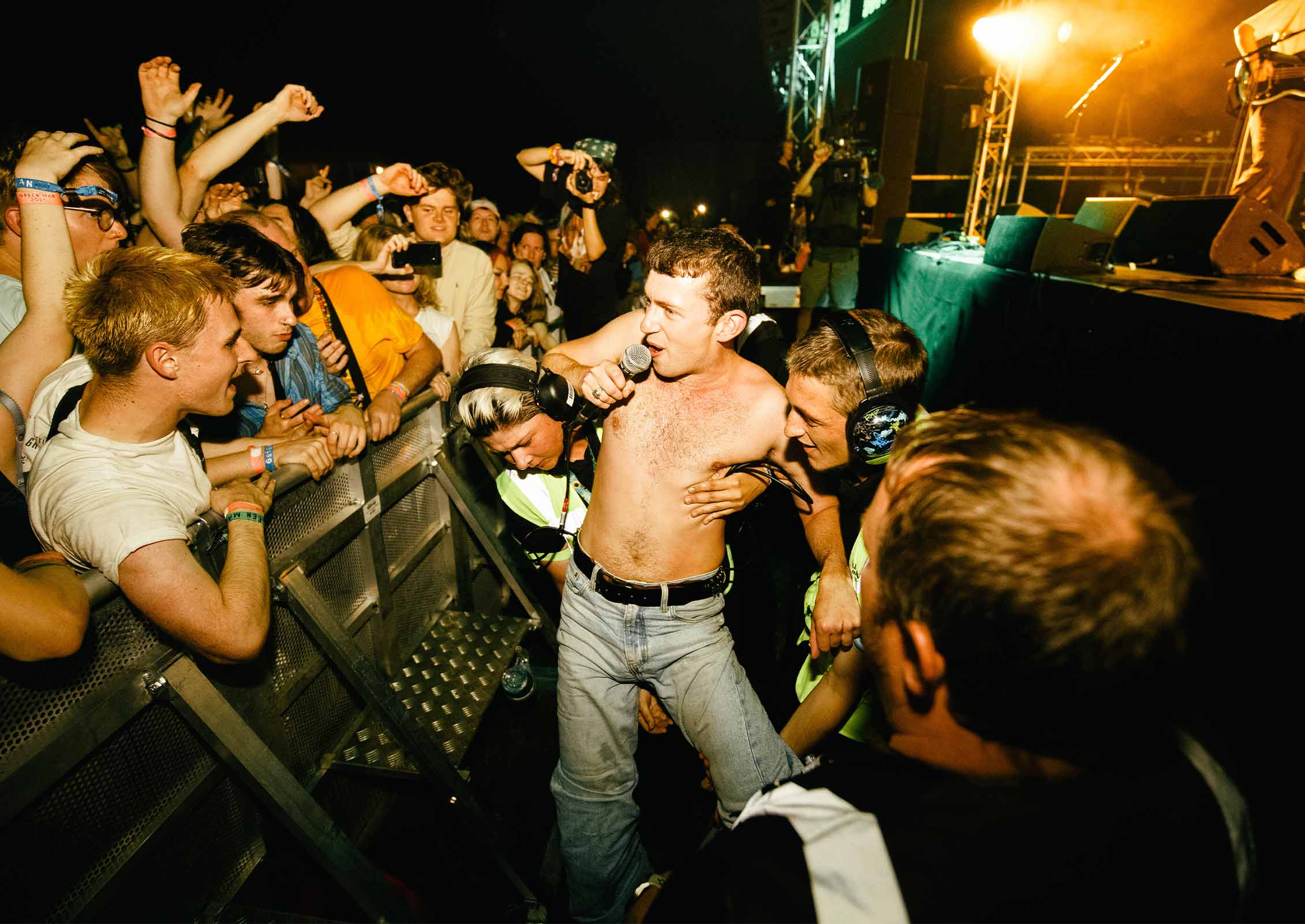 Saturday brought Gwenifer Raymond’s guitar raging against a backdrop of mountain peaks, with Yazmin Lacey offering her sturdy and decadent jazz-soul vocals to the mountains soon after. Galway group NewDad proved that languid, soft rock can translate brilliantly to the stage, wowing with single “I Don’t Recognise You”. Black Midi was quite the contrast, with their feverish rock accompanied by a trio of confused looking clowns. The Walled Garden turned out to be the perfect stage for the eclectic intergalactic fusion sound of Tony Njoku, which felt surprisingly in line with folk-electro-fusion group Vanishing Twin’s performance at the same location the day before. This Is the Kit took the Mountain Stage for a downpour performance of their gemlike folk hits, “Moonshine Freeze” and “Bashed Out”. Laura Marling’s secret set was perhaps a little too secret; we managed to also miss her playing as part of Lump, who were vying alongside band The Orielles for audiences. The end of the night held another tough call between headliner Mogwai and beloved acoustic artist José González, whose soothing songs are (though the phrase is cliché) truly balms for the soul. 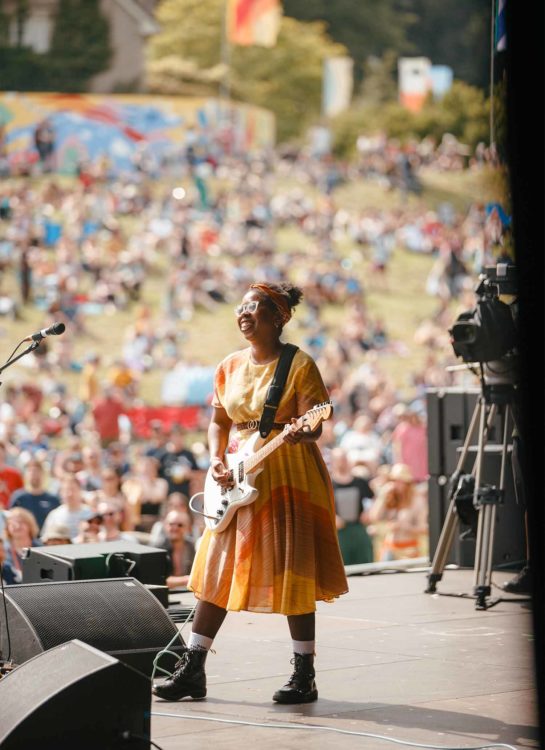 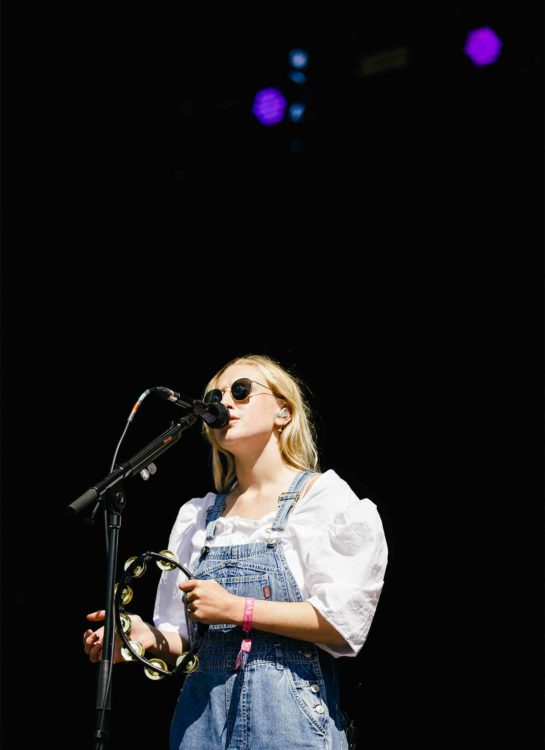 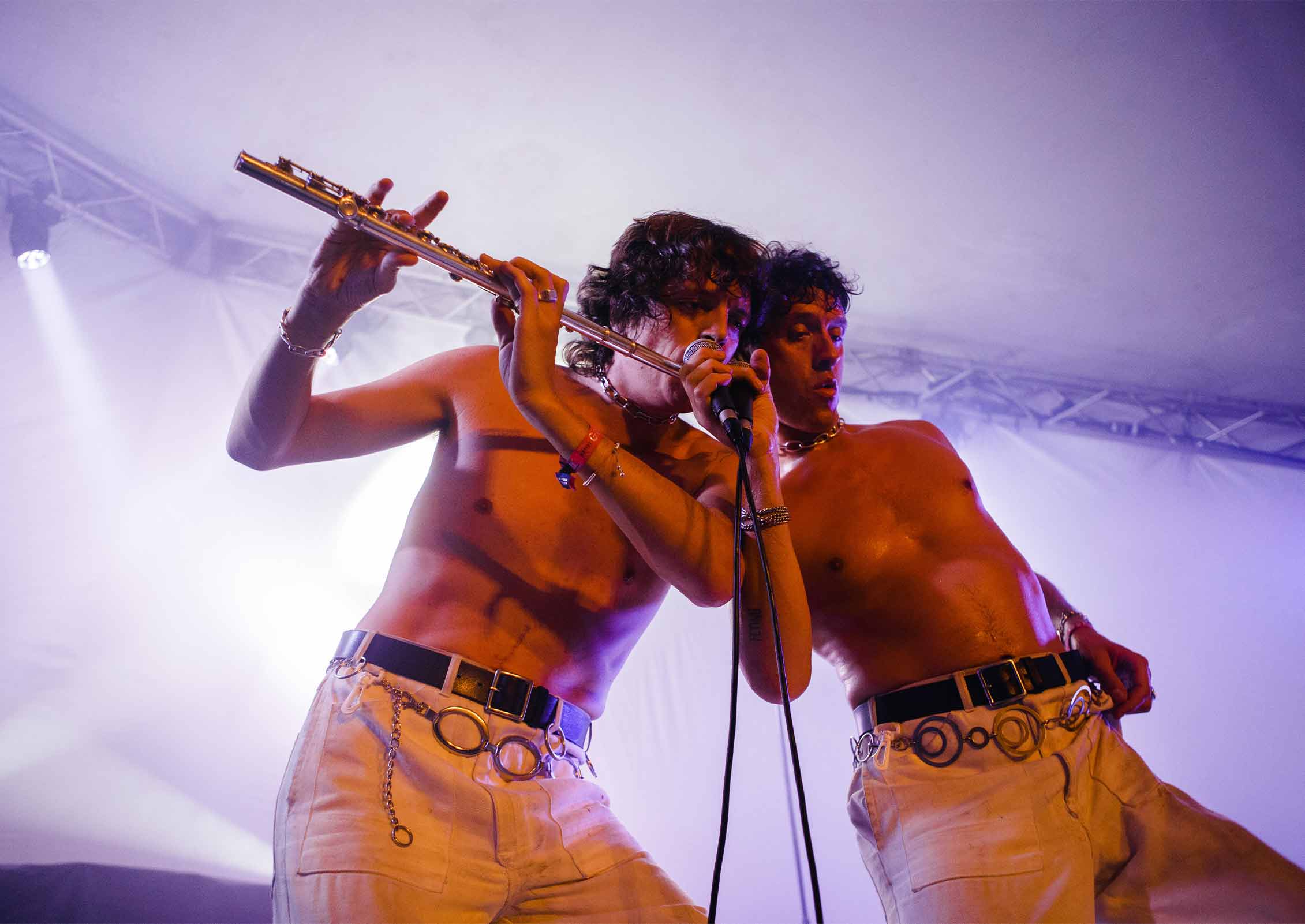 Sunday quickly wheeled in energetic performances from synth pop brother duo Speedboat, whose verve was matched by Vancouver collective Crack Cloud. Porridge Radio, who have been headlining festivals such as Rockaway this year, swiftly seized the stage, dutifully playing their best-known tracks with a couple of new ones thrown into the mix to a swaying crowd. Dream Wife topped off a number of artists, Fenne Lily and Nadine Shah included, who dealt with themes of female empowerment – the anti-matrimony band very much bit the head off the patriarchy in their fiery set at the Walled Garden. One-to-watch Nubya Garcia made sure to keep festivalgoers moving with her Mountain Stage performance. Meanwhile, two-time Mercury Prize-nominee Ghostpoet enjoyed a standout performance which fine-tuned the conceptual nature of his work, opening amidst overlapping recordings while the artist often pointedly turned his back to the audience. Thundercat, whose jazz is both utterly fresh and up-to-date but still pays tribute to the greats, gave an unmissable performance, riffing off his staple tracks in swirling, entrancing improv. Irish five-piece Fontaines D.C. fully lived up to Green Man 2021’s final headliner slot, as the Grian Chatten, kitted out in Adidas uniform, blasted irresistible rock thrashers from the Mountain Stage.

If a wholesome music festival seems unlikely, Green Man is surely it. Areas such as “little folk” tailored to children and young adults would surely take smaller attendees’ breath away, while daytime performances and events felt particularly suited for family viewing – cellist and vocalist Ayanna Witter-Johnson gathered an audience of captivated young and adult listeners, while jazz collective Kokoroko whiled away the summer hours as children rolled down grassy banks. The Cinedrome screened films to keep kids entertained in the mornings, opting for engrossing music documentaries in the evenings. Green Man’s literary events were also highly popular: Helen Macdonald, author of H is for Hawk, gave a lovely nature-themed talk, while Simon Armitage had attendees fighting over seats. If enough wasn’t already on offer, the “Babbling Tongues” area hosted established and upcoming comedians well into the small hours. 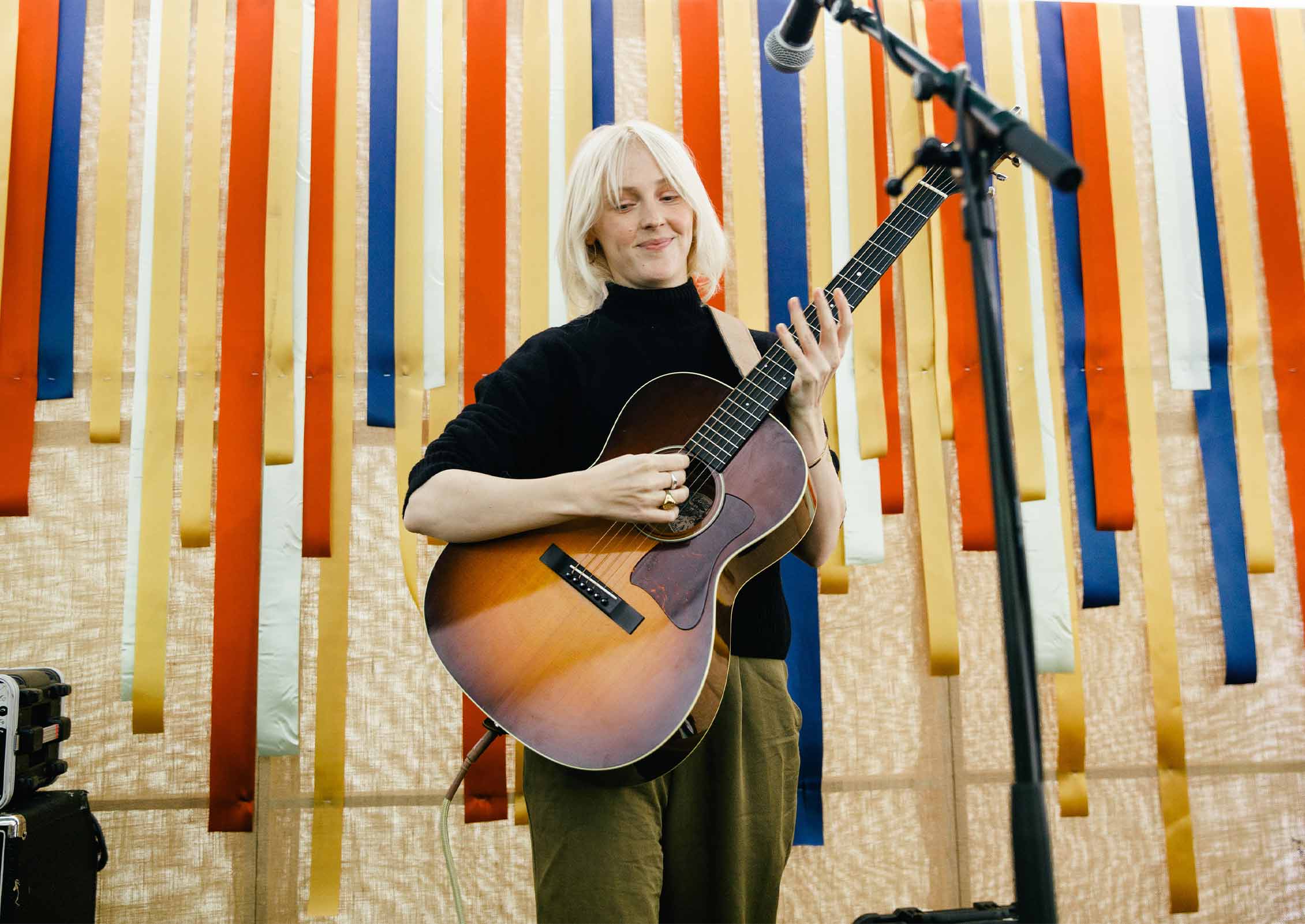 Another draw of Wales’s Green Man is its environmental conscience: reusable cups are niftily designed for stacking and disposable plastics are banned on site. At times, this environmental focus felt a little misplaced: run-of-the-mill campground toilets were made far worse by opting for an eco-friendly alternative, while recycling bins weren’t present throughout the site. However, this emphasis on environmentalism is certainly the future for festivals.

Green Man 2021 had a hallucinatory feel, perhaps partly a side effect of returning to festivals after so long spent in lockdown – but most certainly also due to the selection of otherworldly, cosmic-esque artists, set against fleeting surrealist art installations (a huge glittering pair of lips strolling through the grounds, whispering voices echoing across a lake, galaxy-like projections lighting up the walls at night.) With the festival’s 20th anniversary next year, we can’t wait to return. 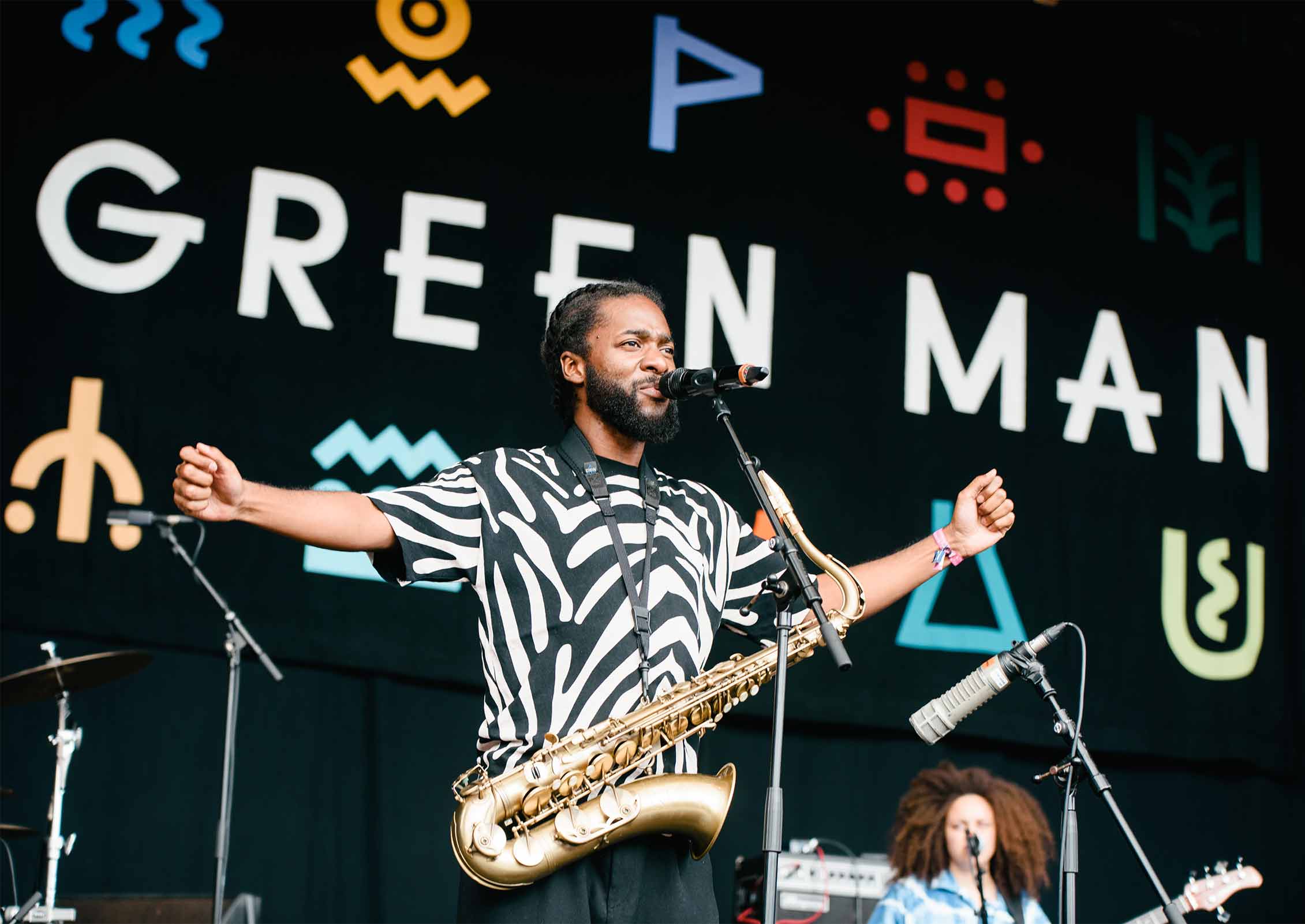 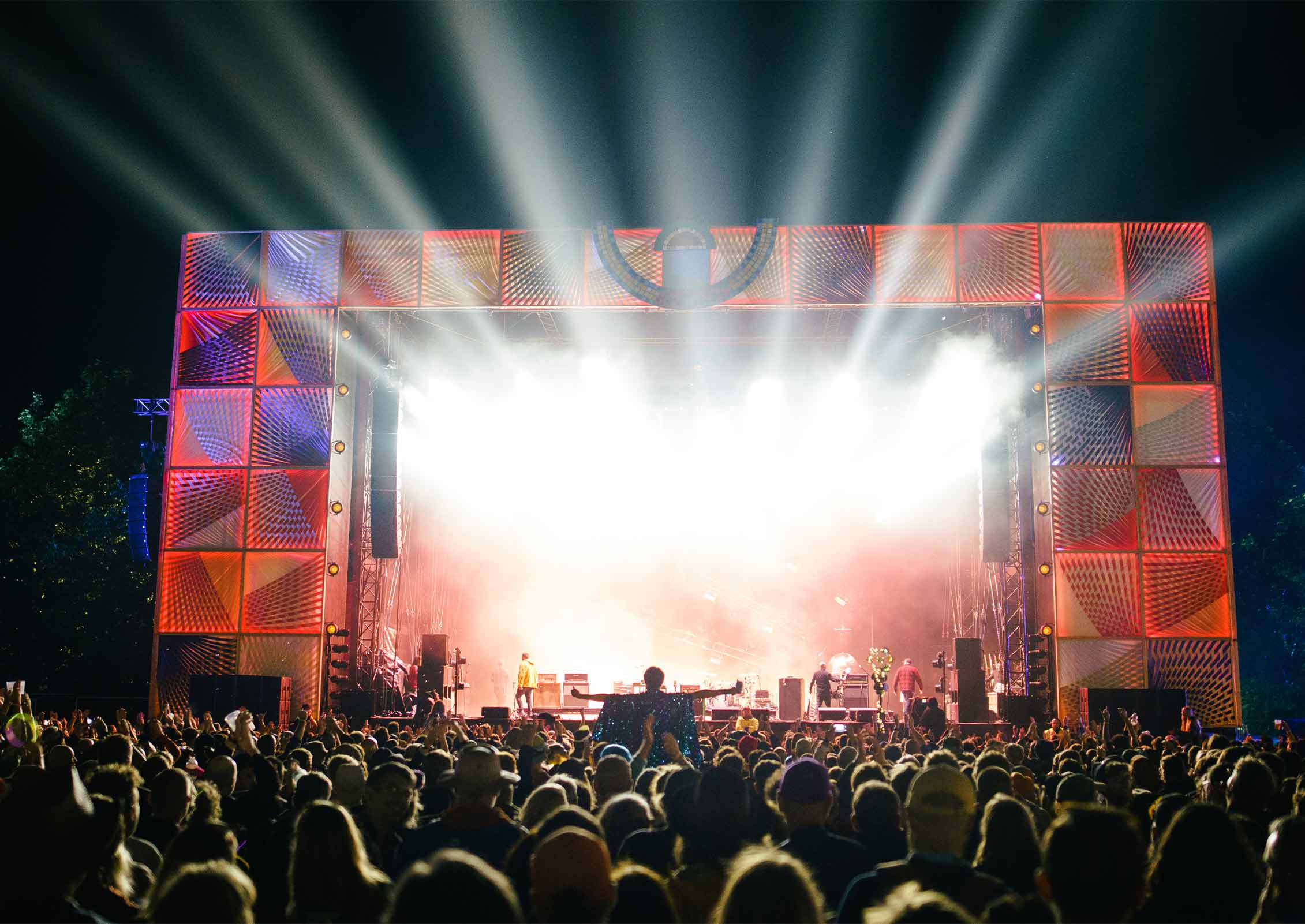 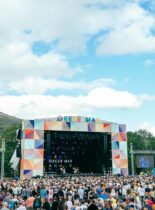 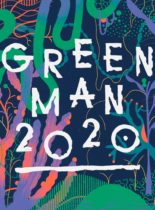