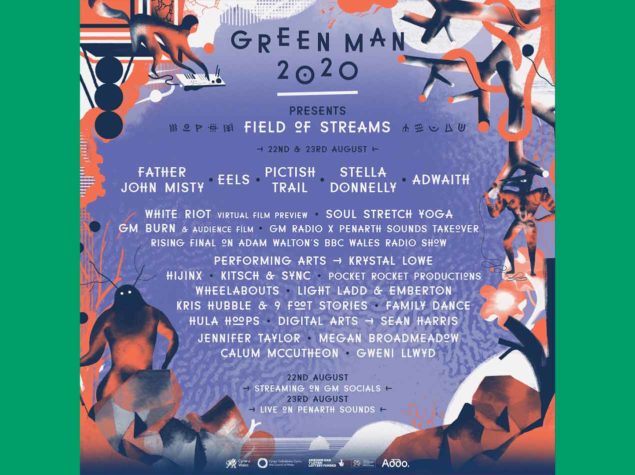 Due to the ongoing COVID-19 pandemic, festivals around the world have sadly had to cancel their events this year. But just because we can’t party in person doesn’t mean the party has to stop, right?

Please welcome to the stage, Green Man! The award-winning independent music, arts, comedy and science festival is usually held in the stunning Brecon Beacons in Wales, but this year, it’s going online.

But Green Man has always been about more than music, they also put a big focus on performing arts at their annual festival, so their online event will be no different! ‘Field Of Streams’ will feature specially commissioned shows from top-tier Welsh performing artists, including Krystal Lowe, Hijinx, Kitsch & Sync, Pocket Rocket Productions, Wheelabouts, Light, Ladd and Emberton, Kris Hubble and 9 Foot Stories. On top of this, streamers will get access to an exclusive virtual preview screening of ‘White Riot’, Rubika Shah’s film following the Rock Against Racism movement of the ‘70s, revealing the power of music in activism and social change.

Tune in for yoga, family workshops and a virtual burning of the Green Man himself this weekend too.

The online event will also reveal the winner of the Green Man Rising competition. Chosen from 1,800 bands who applied, the winner will bag a slot at next year’s Green Man as well as a £750 development fund. Hear who wins on Adam Walton’s BBC Radio Wales show from 10pm on 22nd August.

And if you can’t stream the event but still want to get involved, there will be a Green Man Radio takeover of Penarth Sounds on 23rd August, exploring highlights, mixes, playlists, and much more from Green Man’s 18-year history.

The online event will be streamed for free on Green Man’s Facebook, Youtube and Mixcloud pages from 22nd August. Keep your eyes peeled for the full schedule and timings coming soon.