In the Mix: Gorgon City

Gorgon City are back with eighteen bass-house bangers to greet you when we regain our dancefloor freedom. They chat with Notion and make an exclusive mix.

Despite being separated by the Atlantic Ocean after one-half of the duo moved to the US, Gorgon City have just released their third album ‘Olympia’. Influenced by a pre-Covid era sound palette, the basslines and vocal hooks are familiar from their earlier work. First known for tracks on their debut album featuring the likes of MNEK, Anne-Marie, and Zak Abel, this project shows no sign of them slowing down.

The album is brought to us via Astralwerks, which was formed in New York and comes under the Universal Music Group. It is home to other UK dance music legends such as The Chemical Brothers and Fatboy Slim. Gorgon City have even started running their own label and parties, ‘Realm’, which amplifies similar sounds to the pair’s own musical vision.

Coming out of North London and growing up on the city’s sounds such as Drum and Bass, Dubstep, and Garage, Gorgon City have catapulted popular-British club music sounds around the world. Bringing elements of the underground into the mainstream, means Gorgon City have managed to touch a wide audience whilst maintaining euphoria. Having played at Coachella and EDC Vegas, they boast a global following, particularly in the US.

As much as the album is going to go off in the clubs, like the track “Ecstasy”, with its repetitive 90s-esque drone, the album will lend itself just as well to festivals. This escapism is going to be emotional. Now, all we must do is wait to see Gorgon City play their first show. As the lyrics on the last track spell out, when it comes to getting out of lockdown and back to partying, ‘I want freedom’.

How did you find writing club music during lockdown?

It was up and down, to be honest. Sometimes we found it hard to be inspired to do so with everything closed but then some days it came naturally. It’s been a weird year!

Kye recently moved to Chicago – is this somewhat of a house music pilgrimage?

I would love to say it was but my wife is actually from Chicago, hence the move. Although, being in Chicago has definitely inspired me even more musically.

How did his move affect your creative process?

Surprisingly, it actually worked really well for us both creatively! We took time to really get our heads down together, jump on calls, texts and create this incredible body of work.

What can we expect from your third album, ‘Olympia’, in terms of its sound?

It’s bigger and bolder than our previous ones and is more aimed at the dance floor!

The album is next in a line of projects that refer to Greek Mythology like Gorgon City itself. What’s the story behind this?

We’ve always had our creative foundation in Greek mythology and this is an extension of that.

Where are you most excited to play this summer?

How do US and UK crowds differ?

USA crowds are very enthusiastic and open. The UK is a bit more downplayed and chill sometimes.

You’ve already sold out London’s Printworks for your December show. Is this tour going to have live instrumental parts like some of your previous shows?

No, it’s going to be a DJ tour. We will develop a new live show when the industry gets back on its feet.

What’s the first track you’ll play when you play out again?

Talk us through your mix. What vibe were you hoping to create with it and why did you pick these tracks?

It’s a representation of what we’re feeling right now! 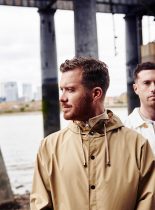 The production duo select the 10Trax they can't stop pressing play on.