At just 15 years old, Lili Aslo had earned millions of listens on her SoundCloud and has since collaborated with musicians such as Ryan Hemsworth, Blackbear, In Love With A Ghost and Daniela Andrade.

Previously releasing under the moniker olli, Lili signed a deal with Scandinavia’s largest independent label ‘Playground Music’ in late 2020. As a songwriter, Lili has been labelled a musical chameleon for her ability to shift and develop her sonic style to accommodate different trends and audiences. Now, Lili lives up to her title and returns as Knife Girl, releasing her new EP ‘METRO’ that redefines the bedroom pop sound of her past material.

Knife Girl tells us of the EP, “I’ve compiled some songs I recorded at home the past year for this EP. Some are more goofy than others, but they all represent some part of me.”

An exciting young artist to watch, Lili produces instrumentals full of character, focusing on capturing authentic, organic emotion. With her new music gaining support from Wonderland Magazine, amongst many others, it looks as though Lili’s rebirth as Knife Girl sets the stage for an exciting new phase in her blossoming career.

Knife Girl: “I Hope That People Will Feel Something, Anything At All” 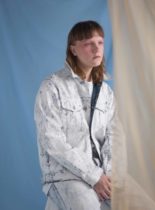 Knife Girl dives into her brand-new 'OONA EP', from the meaning behind songs to the creation process and more.