Creative polymath Malena Zavala continues to glisten brightly and powerfully with the release of the title track from her upcoming album 'La Yarará'.

Essentially, the latest single release from Malena Zavala is a rich tapestry of cultures and references that have collectively come together in harmony to form ‘La Yarará’.

‘La Yarará’ draws from the various aspects, colours and shades of Latin music and culture. From Cumbia, Afro-Cuban, Afro-funk, Andean folk, Argentine folk, bolero-son, and for this track, reggaeton. The carefully crafted production and percussion on this evocative track are purposefully composed to evoke the image of a serpent to the listener.

“The yarará is a venomous snake, a viper, in Argentina,” explains Zavala. “It’s also used as a diss to a sassy woman, and my parents always called me that, so I’ve named the album that as a kind of in-joke.”

Malena Zavala washes everything she does within the culture she was born in and grew up around. It’s evidently clear that this vibrant and rich soundscape is heavily researched by Zavala as she revealed, “With the whole album I was researching every single Latino rhythm and style. With ‘La Yarará’ I started on reggaeton, but wanted to make it in my own way. I also wanted to make a song that’s really angry. And when I do that live, it is a challenge, because I normally sing very sweetly,” she admits. “But I’m trying to summon that yarará.”

Go on and summon the serpent yourself with the premiere of Malena Zavala’s latest track ‘La Yarará’ below. 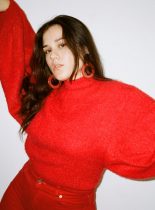 Argentine-born and London-raised, Malena Zavala offers a lavish new take on the DIY world with her sun-soaked ballads, we catch up with the singer-songwriter for this week's Internet Crush