It’s a dreary, rainy Tuesday when I talk to Lotta Lindgren, better known by her stage-name LÉON, and coincidentally, it’s just as gray and moody where she is in Sweden. She’s drinking a cup of tea, the epitome of cozy and calm, although she tells me she’s “the most nervous” she’s ever been to put out music. In this case, it’s her hotly anticipated sophomore album, ‘Apart’.

With over 500 million global streams online, a loyal following, and having performed in shows such as Coachella, Lollapalooza, and Bonnaroo, it’s hard to imagine that the seasoned pro is all that nervous, but she confesses, “I’ve been so honest on this album that my automatic feeling is that maybe it’s not for everybody, but I hope that it is. I hope anybody can find at least one song that they can relate to in some way”.

Like many great albums, ‘Apart’ was inspired by the ending of a long-term relationship, its songs detailing common themes of heartbreak and loss, but also more vulnerable, confidential topics such as self-reflection and honesty about one’s own shortcomings.

Penned during the stay-at-home measures at the beginning of the COVID-19 crisis, Lindgren notes that the album probably would have been very different if she wasn’t forced to slow down and stay in Sweden. “It feels so bad to say it but it did kind of feel like the stars aligned for me with this album. I was sitting at a bar with my friend and producer, Martin Stilling, and I was like, ‘Okay, I’m just going to decide to make this album with you,’ and then everything changed because of COVID. If it hadn’t, if I had felt the need to be somewhere else or work with other people, I know I would’ve felt very stuck. So I’m very happy about how it turned out and that I could be here at home and just work with one person”.

I ask her if she’s particular with who she works with due to the autobiographical and personal nature of her music, and she affirms that working with friends made all the difference for the record: “If I listen to a song that I’ve written and I hear that I’m pushing it or forcing it, it just doesn’t sit right with me. So even if I write with amazing people, it’s very hard for me to open up with someone I don’t know. For this album, it happened to be pretty perfect; Martin knows me so well, way too well, and he won’t ask any questions because he already knows what’s going on in my life. So the way we made this album was like a dream of mine”. One of the only songs not written solely by the duo? “Chasing A Feeling”, which was written by Lindgren and her friends from school. 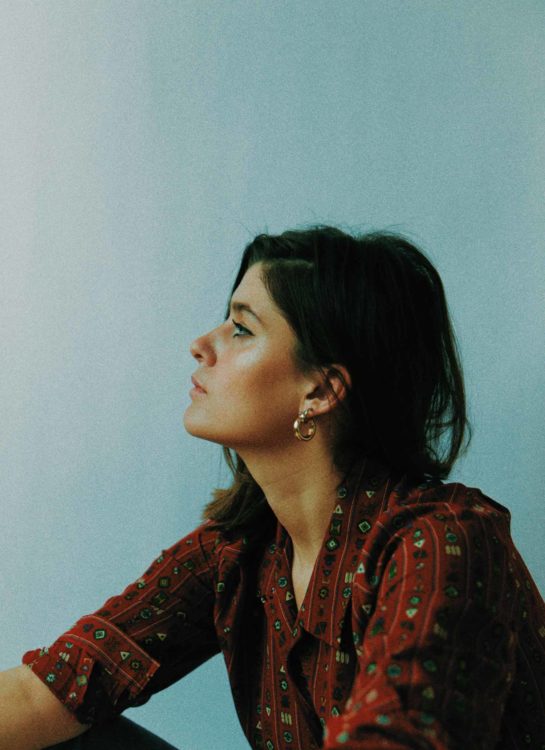 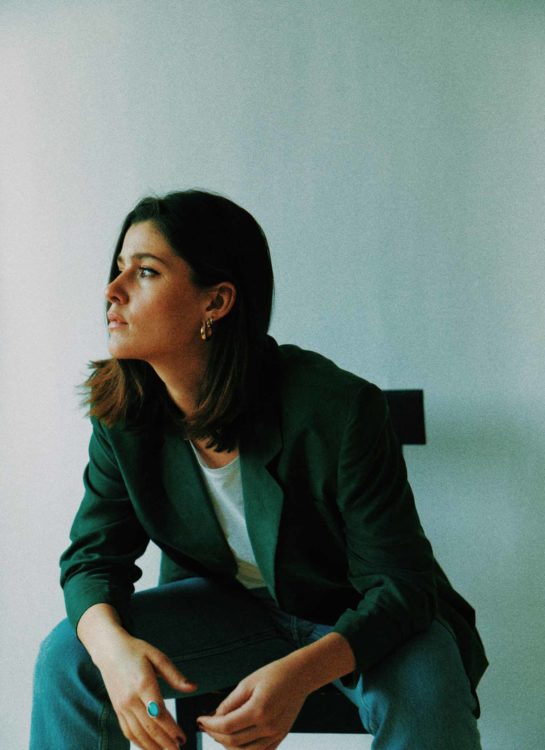 The record seems to follow a somewhat linear narrative of a relationship, starting with the sweeping, nostalgic ‘”Head And Heart On Fire” that recounts the moment a couple first meets, and ending with “Apart”, a sorrowful track full of questions such as, “what if I don’t know myself without you?” that go unanswered, as they often do after a breakup.

In the middle, tracks like “In A Stranger’s Arms”, about the ways in which one copes with heartbreak, and “Chasing A Feeling”, a song that explores the idea of knowing you’ve lost someone before the ending comes, recount relatively ubiquitous feelings. However, songs like ‘Crazy/Stupid,’ which LÉON says “was one of the few songs on the record that’s more about looking at myself and my own behavior, and realizing that I can be a piece of, well, I was going to say a piece of shit, but a piece of work”, and “Who You Lovin”, a jealous, moody, 70s inspired track about an ex’s new fling, reveal the songstresses greatest talent: her ability to be vulnerable and honest to the point of showing us her deepest flaws.

Are songs like that are still hard for her to write? “Yes”, she admits with a laugh. “Everything I put out feels so personal in different aspects and it comes from a real place, but now, when I’m so close to putting out the album, I’m thinking, ‘did I put in too much of my truth?’ But I’m happy that I did because I didn’t want to hold back. I didn’t want to sugar coat anything”.

It’s not too difficult to understand why, when you listen to it. Perhaps the most heartbreaking of all the songs on the record, with lyrics like, “What do you do when you love someone but feel like you can’t go on?” and “I’ve been running all my life, I can go for miles and miles and miles”, the track is a deeply confessional ballad that sounds as if you’re alone in a room with just LÉON and a piano.

Considering the intimate, heartfelt nature of the record, I’m curious; does she ever care what the people who inspired her songs will think about the music? “I’ve never been nervous about that until this album”, she confesses. “I’ve been a little nervous putting out songs, thinking about how someone will react and having that person in mind, but with this album, I’ve been like, ‘Oh my god, his mum! What is she going to think? What are his friends going to think about me?’ But everybody has been very nice so far”. So people have commented on tracks before? “Umm… yeah,” she says, a smile in her voice. “It’s funny, because there’s one guy that’s been so sure, and apparently he’s been walking around telling everybody that a certain song is about him and it’s not, but I don’t have the heart to tell him”. 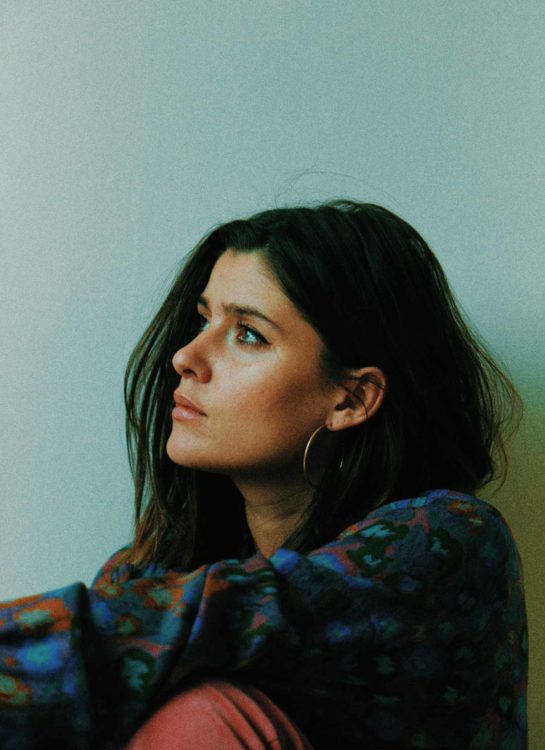 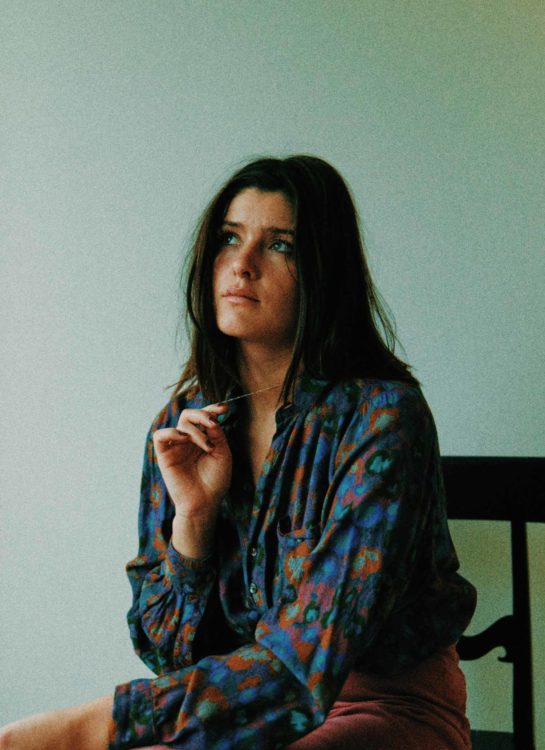 And who could blame him? With her classic, dreamy image and sound – inspired by icons such as Joni Mitchell, Fleetwood Mac, Etta James, and Carole King, – anyone would be honored to be the muse of her work.

Lindgren mentions that when she listens to music, she loves “diving into lyrics and reading into all the tiny little details”, which I note are what her fans probably do, too, and why they feel so connected to her work. I wonder: does that connection go both ways, too? “Definitely,” she replies. “I’ve been thinking about that, about what is the best part of making music and putting out music, and it’s definitely seeing how people react and having conversations with people. When you get messages on Instagram or different platforms and having conversations with people that are in the same situation or can relate, that connection is the most important thing. It’s the biggest thing, definitely more now than ever, knowing that people can connect to it”.

Speaking of “now”, I’m curious as to what she’ll miss most about the normal process of promoting an album given the limitations imposed by coronavirus: “I think the biggest thing is not being able to live out the album on stage. With the last album, we toured it so much that I was able to play the songs and feel them out and explore; songs tend to get a new life on stage. But with this one, they’re just going to be what they are”. I ask if she’s thinking of any other ways to perform the songs and connect with fans going forward. “I want to get into the whole live stream world. It’s so interesting. Times are strange so I want to come up with something so it doesn’t feel so anticlimactic”.

Throughout our conversation, LÉON jokes that maybe she should have added a few more upbeat songs to the album, that maybe it’s a bit too “depressing,” but that she wanted to keep it real, considering “a lot of these songs were written during late nights when I was going home in the middle of the night a bit drunk and sad”.

I tell her that’s probably the best way to describe ‘Apart’; an album to listen to whilst walking home drunk and sad.

“That can be the title of this, then”, she says, a joyful laugh flittering in across the phone.

It’s hard to imagine that the same woman I’m talking to is the one who wrote these mournful lyrics, but if anyone could hide a deep, inquisitive soul behind a laugh and a smile, it’s LÉON.

Listen to LÉON's latest release below: