London Fashion Week finally returned after two years of cancellations and online presentations. Whilst some houses did choose to show their collections digitally, those that didn’t gave us plenty to talk about. From pop-star performances, to pregnant models and alien inflatables, the event was certainly back with a bang.

Best of The Shows

In Boateng’s words: “Showing at London Fashion week after 12 years was a culmination of over thirty years of representation of my African heritage, who I am as a creator but most importantly who I am as a black man.”

In another triumphant return, Molly Goddard continued to show us the many joys of a large amount of tulle. Her full-scale production took place at the Seymour Leisure Centre, as models hit the catwalk in oversized puffy silhouettes, Fair-Isle patterns and bright colours.

With her work deeply rooted in an examination of both her Indian heritage and British cultural identity, as well as a decidedly female viewpoint, Supriya Lele reminded us of her skill designing for women’s bodies. Lele was one of the finalists of the LVMH Prize in 2020 who shared the €300,000 prize fund when the final leg of the competition was cancelled due to the pandemic, and the show was much anticipated. The final 20 looks played with unusual cutouts, soft colours and careful draping. Star of the show was Paloma Elsser – arguably the hottest booking this season.

Another show starring Elsser: designer Nensi Dojaka is the current winner of the LVMH Prize. Her lingerie-esque styling works alongside the Euphoria dressing and cut-out trends we’re seeing everywhere, but Dojaka’s interpretation elevates these ideas. The melding of barely-there dresses with strong tailoring demonstrated the possibilities of power in silhouette-hugging clothing.

In Dojaka’s words: “I just wanted to introduce a bit more of a wider concept of what this woman can be.”

Another designer returning after a long hiatus – KKW by Kay Kwok was all about futuristic avatars and a rebrand moving towards digitisation. A show highlight: the screen at the back of the runway showing a live-feed of the audience and runway itself, for a digital version of a model to walk wearing Kwok’s designs.

Stand-Out Moments From Across the Week

Only 70 people were lucky enough to witness Smith’s seven-minute rendition of Des’Ree’s “I’m Kissing You”, as they soundtracked Harris Reed’s impactful and explosive show. Set against the backdrop of St John’s Smith Square, Harris portrayed gender-fluidity with club-kid culture and a cloud-set designed by Lukas Palumbo. Definitely a powerful opening to the AW22 Fashion Week.

Dojaka’s runway gave us another stand-out moment when model Maggie Maurer announced her pregnancy in possibly the most glamorous way ever: walking pregnant at Fashion Week.

With plenty of videos doing the rounds on social media, it seems Jack Irving’s futuristic designs had viral appeal this year. For the ‘On|Off Presents Jack Irving’ show, Irving tackled the metaverse with fits including inflatable moving tentacles in many iterations.

Drag performer Violet Chachki reminded us of her icon-status when she took to the runway this week for Richard Quinn’s show – complete with full latex and model James O’Connor on a leash.

Fashion East is a show known for launching the designers of tomorrow, and this year’s presentation was no different as Jawara Alleyne, Chet Lo and Maximilian demonstrated their collections. It was Euphoria star and audience member Chloe Ferry who stole the show, appearing at many of this year’s events – at all the hottest tickets. 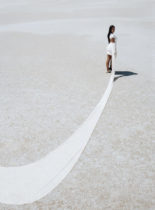 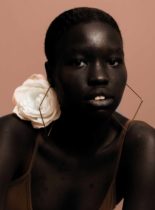 In the midst of London Fashion Week, Fashion Minority Alliance announces its launch, marking the beginning of long-term change within the industry. 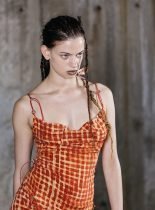 We get the lowdown from hairstylist Sandra Vacev who sculpted gorgeous hair for the Charlotte Knowles SS20 show with Blue Tit and Oway products!