In his music, Jem brings together a cacophony of cultures into something that is coherent and new. He cut his teeth studying contemporary music in London, but also possessed a genuine love for opera music from a young age. Taking in the likes of Radiohead and Nick Drake, he fuses these Western influences with the sounds of his Middle Eastern heritage to create a truly exciting fusion.

His music is both spiritual and exciting, intended to move the listener in more ways than one. It’s about building out a world that the listener can live in for the course of the song, so that they can come away with it with a new understanding of some kind.

His latest single, “Lost”, anticipates an ambitious and eclectic debut EP ahead. It’s a minimalistic tune that conjures up a vibrant emotional landscape lingering just beneath the surface and slowly draws it out. There’s a sense of searching in the song for confidence and certainty that allows it to build its meaning as it goes, finally forming itself in the eruption of emotion at the final minute.

On the song, Jem says, “Feeling lost is a common theme; it is okay to feel like that; there is nothing wrong with it. When I say it out loud, it makes me feel better. I would want people to take this away.” 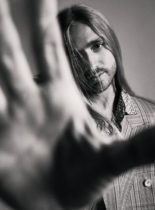