Luke Unabomber: The Evangelist behind Homobloc

We caught up with Luke Unabomber ahead of Homobloc festival, the queer party which celebrates inclusiveness, effervescence and no bull-shit.

After two decades of hosting some of the most respected and wild parties in the country, Manchester’s Homoelectric shifts the gears and welcomes their first-ever festival. The event takes place on the 9th of  November 2019 and attendees can expect 4 stages of music from an unbeatable line-up in the incredible Mayfield Depot.

Homoelectric founder Luke Unabomber founded the Electric Chair club night in Manchester during the middle half of the 1990s, which he tells us was a reaction to the strict house music sound and dominated commercialism that occurred during the late 1980s. As a result of its huge success, Luke felt the need to expand this unapologetic and liberal society to the masses which was so prominent at his club nights, leading to the formation of Homoelectric. Described as a misfits paradise, the new festival has love and unity at the core of its manifesto: “A heartfelt evangelism that is about believing in something — a come as you are celebration that’s not about exclusivity.”

Expect an injection of techno filfth from none other than The Black Madonna as she takes to the decks alongside Scandinavian super DJ HAAI and pop superstar Robyn for an unmissable DJ set.

Joining them will be an array of star-studded names amongst the electronic music scene including the likes of Seth Troxler, Hunee, Honey Dijon, Horse Meat Disco and Palms Trax.

Founder Luke Unabomber describes the festival as “something very special which is about uniting the clans, togetherness, inclusivity and love. Building a place where we can bring together all our people and our heroes and dance until we are free.” 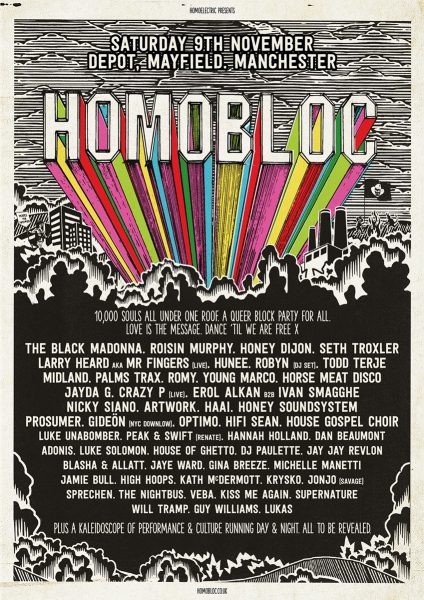 Cal McIntyre: What was your main motivation behind growing Homoelectric into Homobloc?

Luke Unabomber: There was no real plan and it wasn’t to create a brand. We’d always talked about doing a festival than simply just a club night. It’s been an idea for over a decade really and I always said if the perfect place came up, the holy grail of venues, we’d do it and until then we wouldn’t. It really was a continuation of what we had already been doing. We don’t do anything fast and this has been a long time in the making — 21 years of blood sweat and tears — it’s a natural expression of wanting to do something a little bit different so I think it was the logical next step.

It’s not about the money, it’s just something we’ve always talked about and I also think when Mayfield Depot got thrown at us as an option I was over the moon because I used to DJ there about 8 years ago and it was just like “My God, this is amazing.” These places don’t exist anymore, they’re like derelict old warehouses on the edge of the city centre. When we did Legends, Hidden and White Hotel these places were scuzzy, grungy, dark, shit toilet basement clubs where you could only attract people through the music and the vibe. People wanted to be in a queer space and those venues are very important. Mayfield is that – it’s just bigger and got a roof on it and has a feel of the old Manchester like Berlin in the 80s, so really it’s a step up but a natural progression from doing a club for 21 years in shit warehouses.

CM: What have you noticed in the change within club culture throughout the years?

LU: think there has been an explosion in creativity, call it the revolution if you like. When I was 16 or so I was listening to house music in Sheffield but it was very small and just a scene — 200 people in a basement club — it grew and grew. Inevitably, money and commercialism wanted to grip it and take it somewhere else which it kind of did so the movement became huge. Eventually, dance music became EDM which became prominent at worldwide festivals and DJs became brands getting paid £49 million pounds a year. In a sense that happens in any movement, like Shoreditch or Dalston which were once underground areas and have now become something else. There’s always that love for creativity and doing it because you believe in something. I’ve noticed in the clubs the body language changed, it became less about togetherness and became I guess more of a lifestyle where the mainstream simulated the underground and clubs just felt slightly different.

I think what’s happening now is the queer scene is leading this which is really exciting. There’s a need and requirement to belong and be together again because not only did the underground become the overground, the world at the same time has become toxic. It’s created this world where people want to remove themselves, stick together and feel like they belong somewhere in a world that feels so alien. What I’ve seen in the last 5 years in Manchester is the gay scene leading this movement of clubs in areas of cheap rent where creativity is exploding again in reaction to all this dominant commercialism. It’s a lot more loving and the gay scene is more united and there’s a lot less segregation.

People don’t care what they look like and that has meant that people of all different types have been attracted to this vision, and a lot of straight people are coming because they feel like a queer environment is one where you can feel yourself and surely that is the very notion of what queer should be about. You can be who you are, whatever your definition of queer is, so I’ve seen a real change and a very exciting change back to that movement where it was more than just going to a generic festival where there was no love — so I think there are exciting times again. 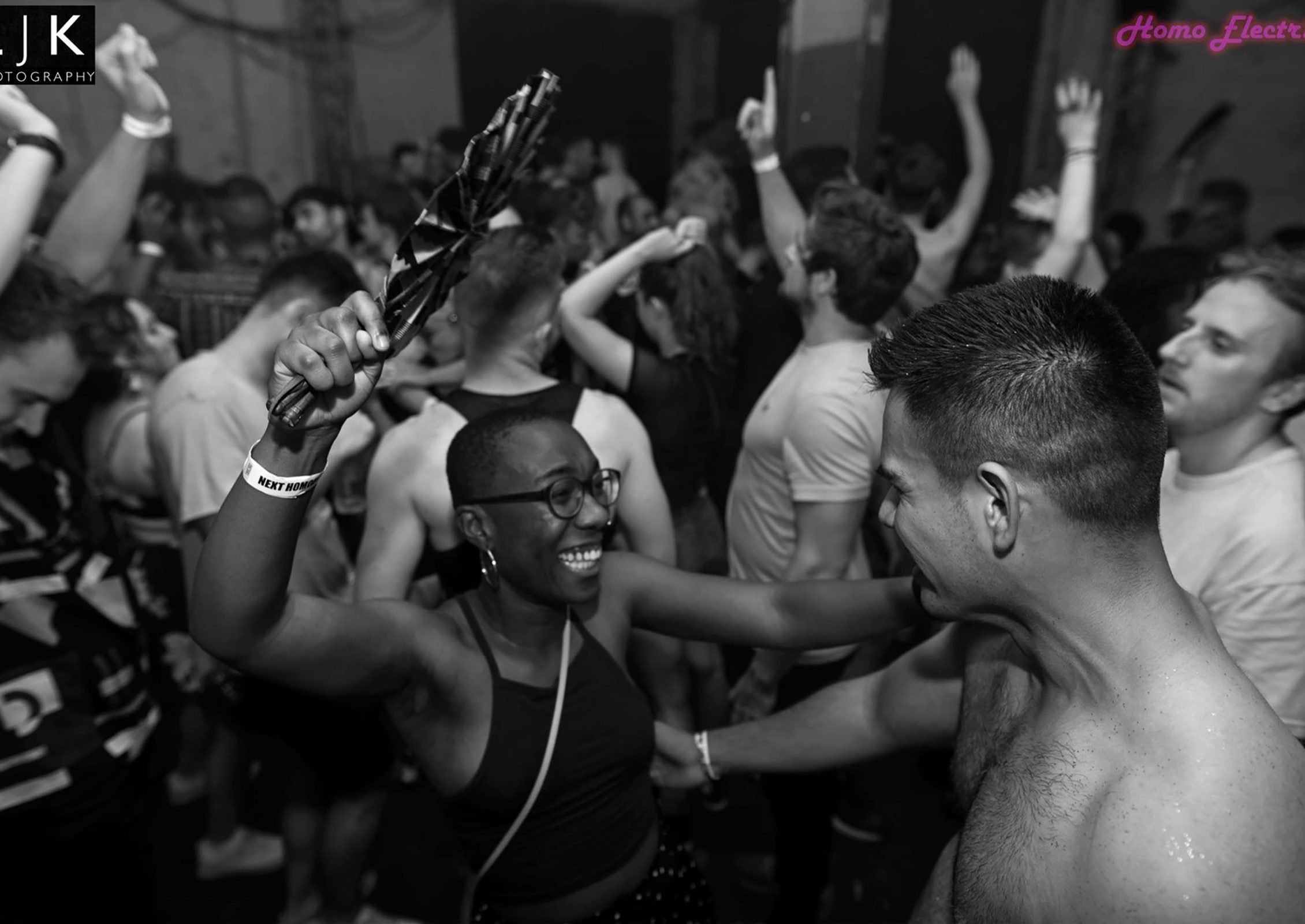 CM: Is that why Manchester is such an important place? And is why Homoelectric and Homobloc have found their home in Manchester?

LU: Yeah, I think the time is right and the time is now. It reminds me of the mood when I’ve been to Berlin in the 90s and it’s got that feeling where DJ’s are now realising there’s something going on in Manchester. It’s not just Manchester, of course, it’s just Manchester has been lucky enough where there have been a few lightning conductors almost which has sparked an energy. Manchester is down to earth and is an extremely diverse place and has always been militant in its attitude and confidence but at the same time, it’s inclusive. There’s a real movement of people wanting to do stuff again where for a few years nothing happened, and all you heard about was DJs doing adverts for underwear but there seems to be a reaction against that.

CM: What is the overall feeling that you want these 10,000 people to feel when they come to Homobloc?

LU: I don’t know how the event is going to go. My feeling is that it’s in a grimy old warehouse with great sound and an amazing line-up with a wonderful crowd and then what will happen will happen. You can never know how amazing a gig is going to be, you just don’t know. My feeling is that it’ll be a wonderful experience with an amazing mix of people.

CM: What were the early days of Homoelectric like?

LU: It was in an innocuous, small, dirty basement bar which sold shit chips and was run by lesbians, had shit carpets and bad toilets. We just played the music we love and there were no plans to change anything. It wasn’t perfect, the sound used to blow up and it was a funny time but I think it was a natural reaction to a dominant mainstream which funnily enough I’m seeing again. There’s always been a scuzzy thread that has run throughout all the nights we’ve ever done. 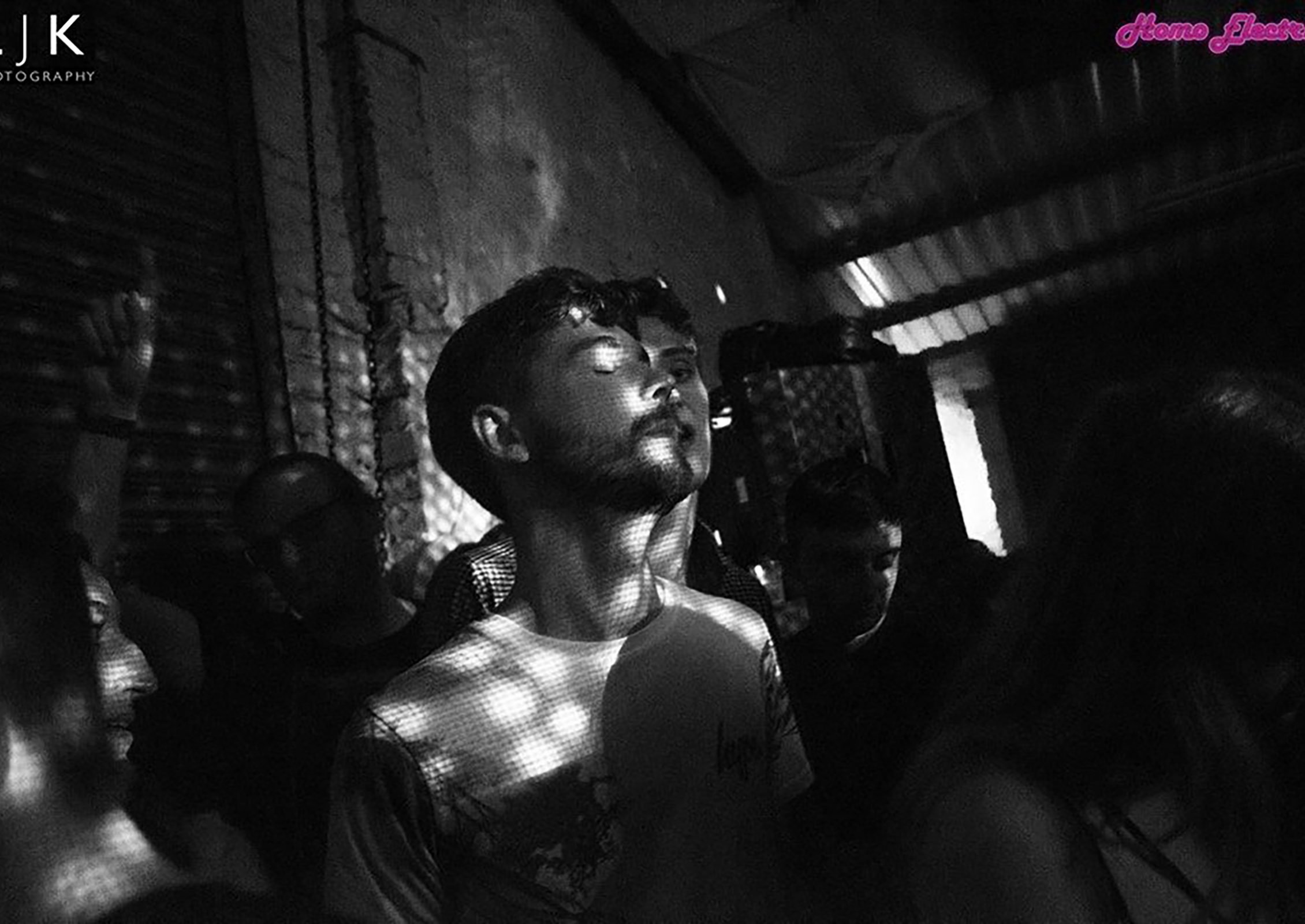 CM: Everyone in Manchester knows what Homoelectric is — I’ve now heard people in London talking about Homobloc. So, is it always going to be the utmost importance to you that it’s a safe and inclusive space no matter how big it gets over the next few years?

LU: It’s a queer party for all. The best parties in the world have dance-floors which are run by queers and women and that’s where you get the effervescence, celebration and no bull-shit so for me that’s what it is — a continuation of Homoelectric but bigger. Look at places like Berghain, people go there because they feel like they can be who they are and there’s no rule book.

To me, a safe space is being able to do what you want and feel liberated and free. Gay clubs don’t necessarily always provide that so you can’t contrive that, it’s just a continuation of what we attempted to do which is to unite. Who you are and the music you love is the most important but it’s a queer party because the queer parties are the best in the world. I’m hoping it’s a retreat from this awful toxic world that’s trying to grow at the moment.

CM: What’s been one of the best moments of your career – if you could choose a highlight?

LU: At the end of every night when we’ve had a good gig, there are moments that feel like the first days of Homoelectric because we were doing something and playing proper underground music to a crowd that had been denied it in a sea of beige and mediocre. That sounds pompous but it’s not meant to be, it just felt good.

Our first gig at Legends and White Hotel, the end of the night feeling meant something and it’s wonderful to experience that with people. I think also meeting the most bizarre people from every walk of life is incredible. Any club, gay or straight, can become mediocre with rules but seeing the maddest mix of people is one of the most exciting things.

CM: What’s been one of the challenges you’ve faced trying to set Homobloc up?

LU: It’s funny, people always think the challenge is bookings and production. It’s a challenge don’t get me wrong, but the biggest challenge is trying to hold the flag up and do something that is inclusive. You can’t deliver something that isn’t heartfelt because they’ll tell you that, so to recreate and maintain that feeling of togetherness at a time where it’s unfashionable to be passionate in a world that has become so narcissistic, it’s a challenge.

CM: What advice would you give to some younger people looking to follow in your footsteps?

LU: Start small. Do it amongst friends and do it in a cellar or a basement, don’t feel you have to do it in a club. Be passionate about what you do and if you’re doing it for the money I wouldn’t bother because it’s fucking hard out there. Believe in it and love music, remember it’s a marathon, not a sprint. Allow yourself to make mistakes — when me and Justin first started DJ’ing we couldn’t mix a fucking gin and tonic let alone records but we just played music we love. Sometimes it wasn’t all that so don’t feel you have to be perfect. Just go out there and do it because it will naturally happen. Be who you are and if your intention isn’t just money then you will succeed because it’s what you believe in.