The ‘Queen of Da Souf’ oversees her empire from the steps of her white maisonette, twirling a lace parasol as she shields herself from the sweltering Atlanta sun. Her white, pristine gown spills around her feet, and she is wearing all her crown jewels, from a diamond ring on every finger to the chain around her neck that reads: ‘Big Latto’. Bow down to her royal highness and put respect to her name.

Heavy is the head that wears the crown, but heavier still is the neck that wears the chain. She is a Southern belle unlike any other: at 22-years-old, being six years deep in the rap game, Latto is far from a debutante, but a leader rich in experience – even if she had to lose a few battles to win the war. Proclaiming herself “Youngest N Richest” in her 2020 track which melds the thrill of a violin with effortlessly executed bars that demonstrate not only her power, but her wit, it’s clear that Latto’s greatest weapon is one you can’t defeat: her music.

Alyssa Michelle Stephens was always a precocious child. The visuals for her latest release, “The Biggest”, which marks her evolution as an artist so far, cuts to a montage of an eight-year-old who grips the microphone with ease and conviction; a natural performer who knows how to command a crowd, an entertainer who moves instinctively under the spotlight. There was little wonder that, at only 16-years-old, she would go on to win season one of The Rap Game, a reality show where prospective artists went head to head to build their mythology and become a star from the ground-up. 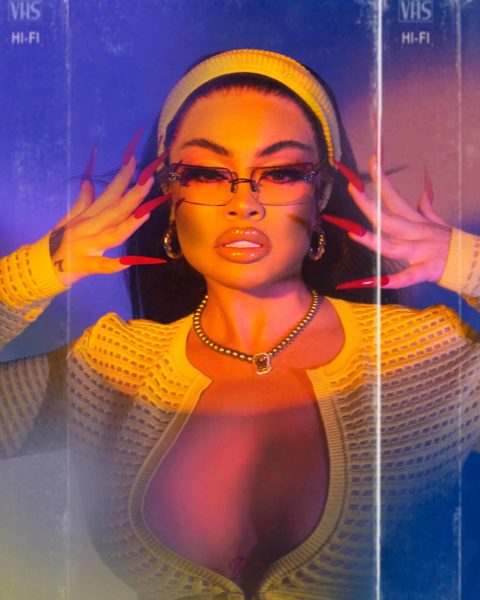 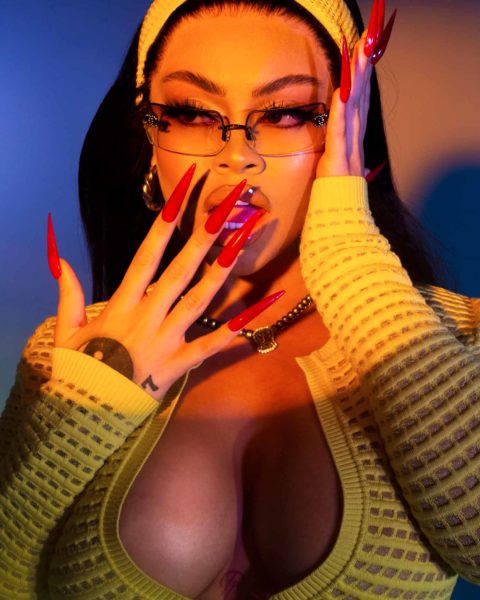 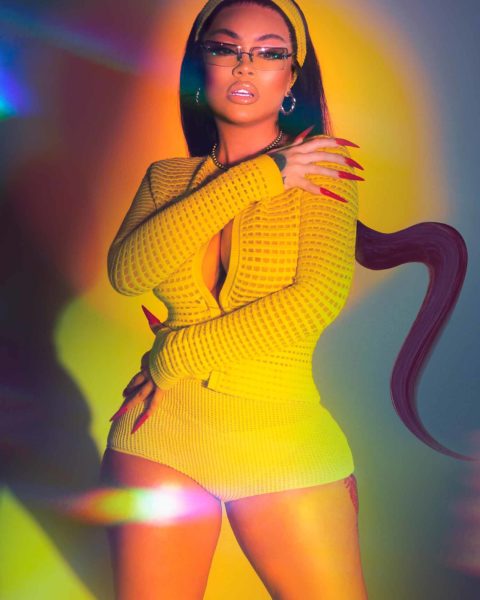 “I didn’t have it all the way together, but I look back and I definitely had my head on my shoulders,” says Latto in her honeyed Southern drawl. “For a 16-year-old, I was very focused and driven. I just wanted everything to happen overnight at that age, and that’s nowhere near the reality of the music business. Nothing’s overnight, and anything that happens overnight isn’t worth the success it brings because it can be gone tomorrow. Anything that’s watered, fed and tended to will be worth it in the end.”

Latto is more than style; she’s substance. Though her onstage bravado takes centre stage with her music (“They always ask me what’s my hobbies outside of rap / Shittin’ on bitches”), Latto, in fact, is incredibly shrewd, with an acute awareness of her position as a young woman carving a space for herself in a male-dominated genre – and more than that, she knows how to play it to her advantage. “I think [women are] definitely held to a different standard, for sure, and I think anyone who disagrees is just being ignorant,” she says. “Females have to go 10 times harder, and the music industry is no different. It’s harder to be heard, harder to be seen.”

Male rappers have been bragging about their sexual conquests since the genre’s formation, but when female rappers tap into the same trope, they’re met with a barrage of criticism and slut-shamed for their sexual empowerment. Latto recognises this contradiction: women are sexualised yet suffer when they try to exert any control over it. “Men can just hold his nuts, swing his chain and just walk on stage, but women have to be top notch with these crazy glam budgets – and they expect us to put on a show, they expect us to dance. We have to put on a whole production. We’re over-analysed, over-critiqued: a male rapper can freestyle about sex and fucking bitches, but if a woman does a freestyle about sex and fucking n*****, it’s a whole different reaction. I think that’s why female rappers like myself are so outspoken and unapologetic in our feminine energy: we’ve got a point to prove and we’re going to throw it in your face.” 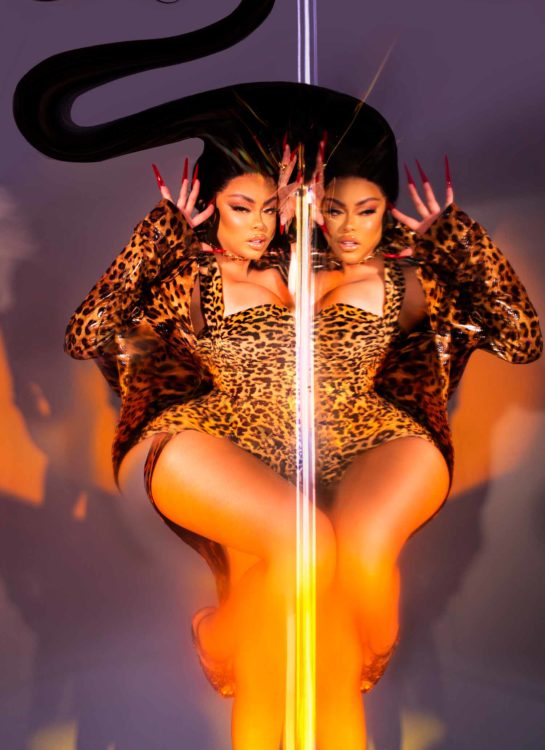 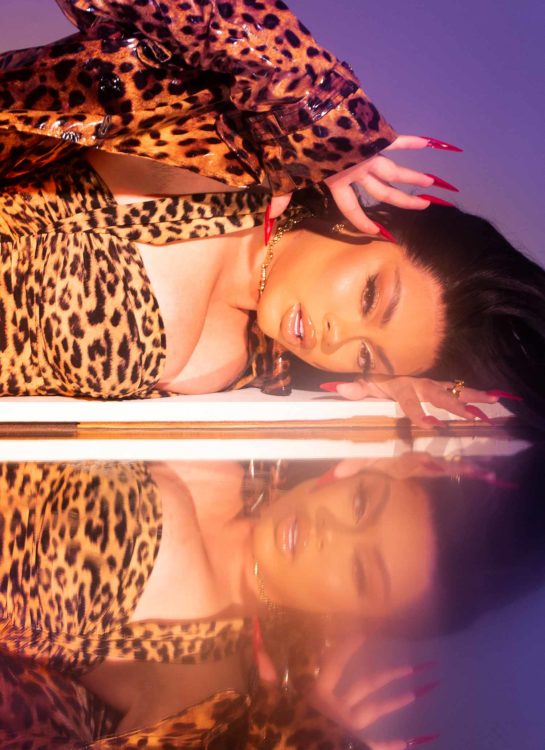 Latto plays her sexuality to her advantage: if she has to exist within a system that is stacked against her, then she will bend the rules of the game in her favour. In the visuals for her track “Muwop”, featuring Gucci Mane, she raps: “Make him give me brain, make him give me Einstein,” playing up to the camera – it’s no coincidence that it’s one of Latto’s most popular tracks, boasting streams in the tens of millions. “Women are overly sexualised, so people are gonna skip every single bar about anything else and focus on that one bar that’s about anything sexual. I have a plethora of songs that you can listen to that aren’t on that topic and other content, but the reality is, the world doesn’t want to hear that,” she says, matter-of-factly, “and y’all don’t stream those.”

Latto’s music is far more engaged than surface-level listeners would likely give her credit for. Her music on “The Biggest”, the track which marked her rebirth from her previous name Mulatto to the Latto we know today, she raps: “They don’t wanna talk about the good / Like when I spent Christmas in the hood / That shit barely got a million views / If it ain’t drama then it’s overlooked.” Every year on her birthday, December 22nd, she makes a point of doing charitable work which is in alignment with her values. “I do that stuff anyways, but I thought a good way to inspire others to do it – or even other artists – was to do it on a publicised level to let them in on my personal beliefs, like, ‘I’m gonna let y’all see this’. But yeah, when I spent Christmas in the hood, like I said, it was very much overlooked because they were only interested in my overly sexualised stuff.”

She also weaves awareness for the Black Lives Matter movement, as well as the killing of Breonna Taylor, particularly, into her music, making a point to elevate the cause through her platform. “Being a Black woman who has this audience, I feel like it’s almost my duty, my responsibility, to bring awareness to the things that are going on in my community,” she says. “I carry that on my back with being a successful Black woman.” 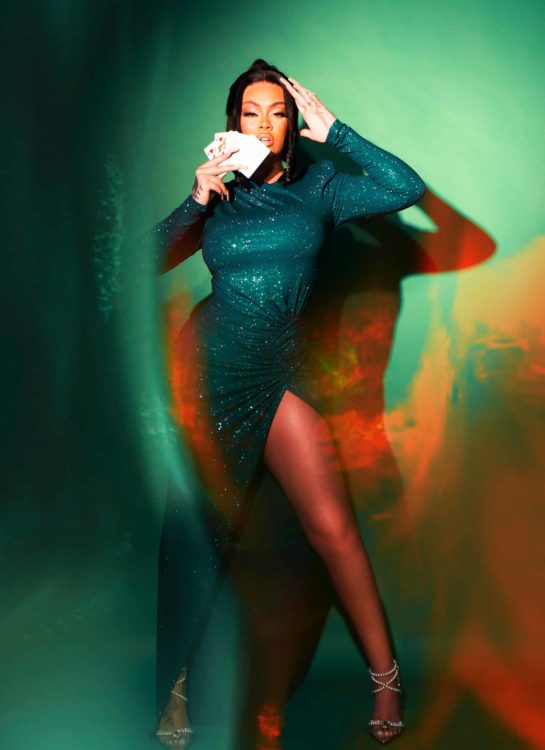 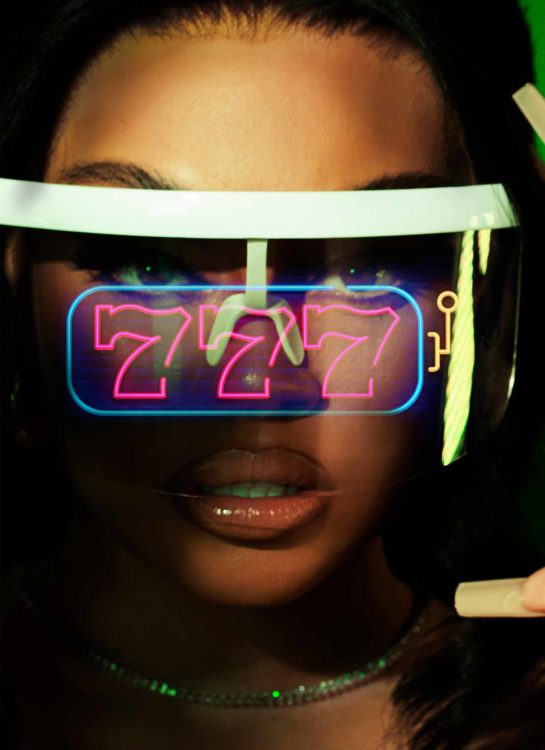 As she matures as a person and as an artist, Latto’s music is shifting away from rap as a fantasy and delving deeper into the reality it tries to escape. The first thing she had to do as part of this reinvention was change her name from Mulatto to Latto. After years of sticking to her guns in an attempt to reclaim the mixed-race slur, the Black Lives Matter movement and the trauma inflicted on the Black community in 2020 alone, made Latto reconsider her choice. “The Biggest” is almost a press conference on that decision: a considered apology with a determination to move forward.

“I had the name Mulatto since I was eight-years-old: I didn’t understand the depth of the word and the weight that it held,” she says. As she started to get older, the backlash intensified, but she was stuck in her ways. “I’m like, ‘Look, Iknow my intentions. Whether or not you want to comprehend my intentions is on you’ – that’s the mindset I used to have. But being so vocal about Breonna Taylor’s murder and George Floyd’s murder, being on the frontlines marching in Atlanta for justice for these people, I felt my name was contradicting my beliefs as a human. How can you stand for something like this? I saw the concerns, and I agreed with the concerns.” She got the ball rolling with her label to undergo the process of changing from Mulatto to Latto, and while it was a logistical pain, it was necessary. “I felt like the people deserved an in-depth explanation and that’s why I did it in a song, doing what I do best, which is music.”

The name Latto, in a stroke of serendipity, is a reference to the lottery and good fortune, both financially and spiritually. “I think it’s just turning over a new leaf and setting a new tone for my career,” says Latto, “whereas I think Mulatto could have been holding me back, in a way. I feel like I might have been subconsciously harbouring negative energy and attaching that to my career, so I’m interested to see where the more aware version of myself takes me.” She is in the studio as we speak, approaching the end of her next project and the first under her new name: a line has been musically and personally drawn. 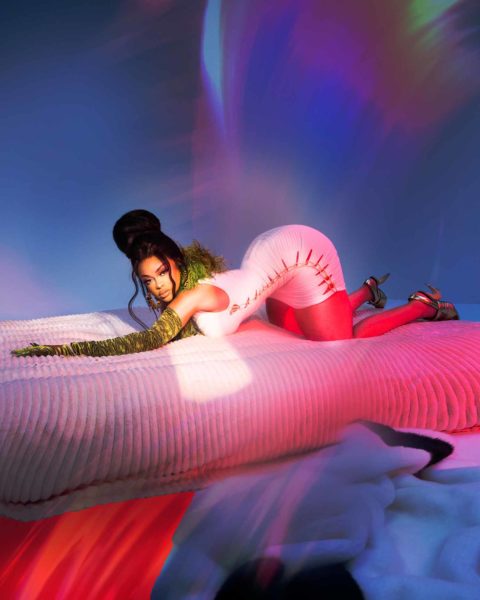 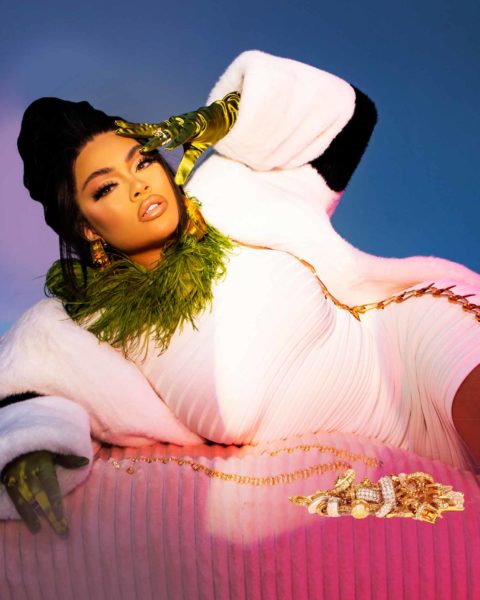 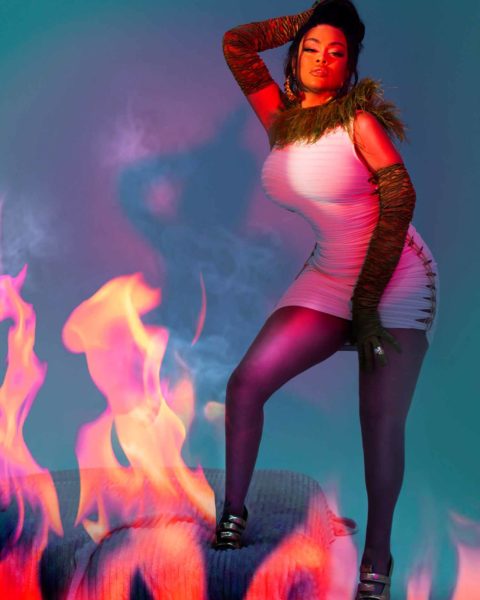 But there has always been a distinction between Latto and Alyssa. “It’s like night and day,” she says. “Alyssa is super reserved, super shy, versus Latto, who is the superstar version. There’s no room to be quiet at all when you’re in the spotlight, so as soon as I get off stage, I’m right back into Alyssa mode. Anybody who knows me knows I’m so shy. People always say, ‘Girl, be quiet! You are not shy!’, but they don’t get it. But the true version of myself, the most raw, authentic version is Alyssa – and Alyssa is shy.”

Her alter ego is necessary in anchoring Latto to her home in Clayton County, when her success threatens to leave her lost in a different galaxy. “I think you can easily let the industry swallow you and you become swamped with this glamorous version of yourself and get out of touch with reality,” she says. “It’s kind of necessary to keep those alter egos separate so you can tap back into reality whenever you need and stay humble.” For her, it’s as easy as turning the lights off and on.

Latto has come a long way from the little girl latched onto her father’s hip on the set of a B5 music video, dazzled by the cameras, the outfits, the cars and the lights – all on a school night. Through competing and winning The Rap Game, she learned the ropes of the music industry, and through intuition and talent on tap, she took control and made her childhood fantasy of living the fast life a reality. Despite the TV show trying to commandeer her narrative, Latto is finally taking back control of her own story. “People think, ‘Oh, you’re changing,’” she says. “I see the comments, and they say, ‘Oh, I miss the old Latto’, when really, this is the real Latto. Everything that I’m putting out, I stamped it first. I’ve not changed – I’ve just started being me.” 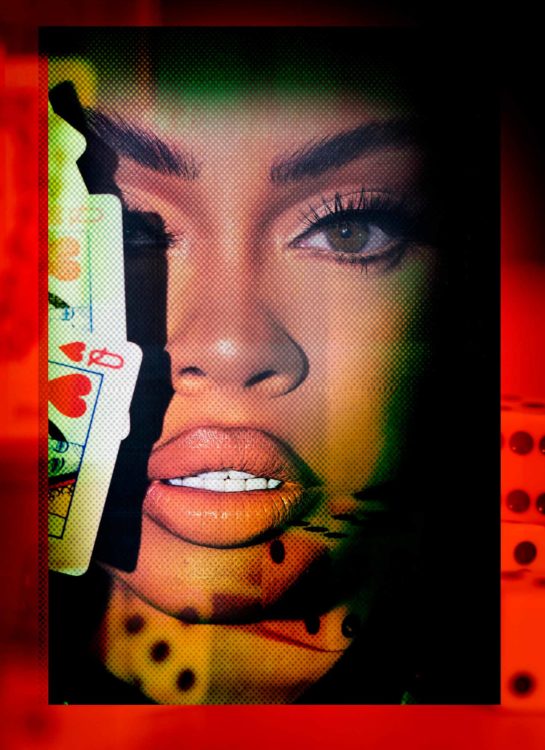 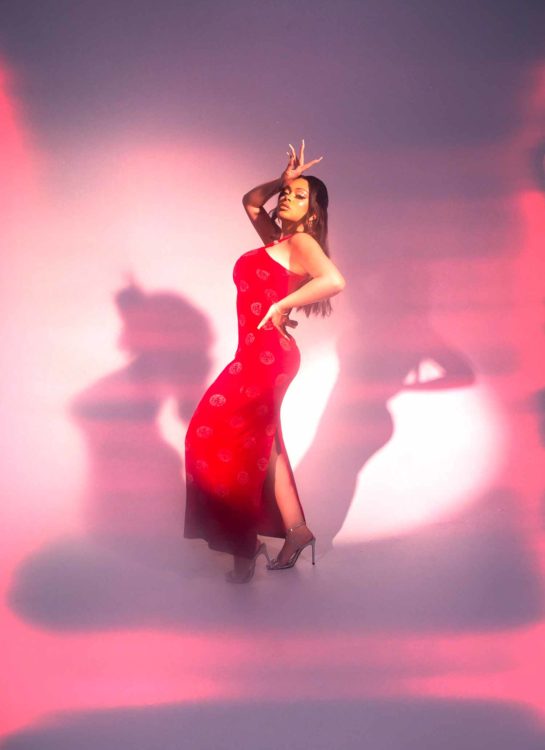