Singer, rapper and NiNE8 Collective member Nayana IZ is trusting her vision and getting vulnerable with her truest self.

She’s just one of the artists driving the early days South Asian rap of Jai Paul and Riz Ahmed forward into a new age, fronted now by women who are bred by and borne of a fusion of Asian and British sounds. It’s something that hasn’t really been championed since the arrival of the OG South Asian rap goddess MIA. But now, South Asian women are steadily dominating our hip-hop radars.

The one such artist I speak of is NiNE8 Collective’s NAYANA IZ. Her aura radiates even through the little camera and mic of a mobile phone. A soft smile rarely leaves her face and she speaks with the patience and wisdom of someone way beyond her years. This persona is equally obtainable from the artist’s music.

Nayana Sharma was born in North London to Indian parents. One of her latest tracks, the intimate “Breaking Point”, is the first type of music she started making. She wrote the hook when she was around 15 years old, but it’s a part of herself she hid away. She went on to rapping over beats instead, following being bullied at school and feeling like she had something to prove.

Like a fortress, Nayana tells me that she usually comes into her tracks with a lot of power in order to support a wall she’s built up to protect a wounded part of herself. “I feel like I won’t release a song like that for a while,” she admits. “The next ones are proper hard songs. I just need to wait for something bad to happen in my life!” she says through a buoyant laugh. 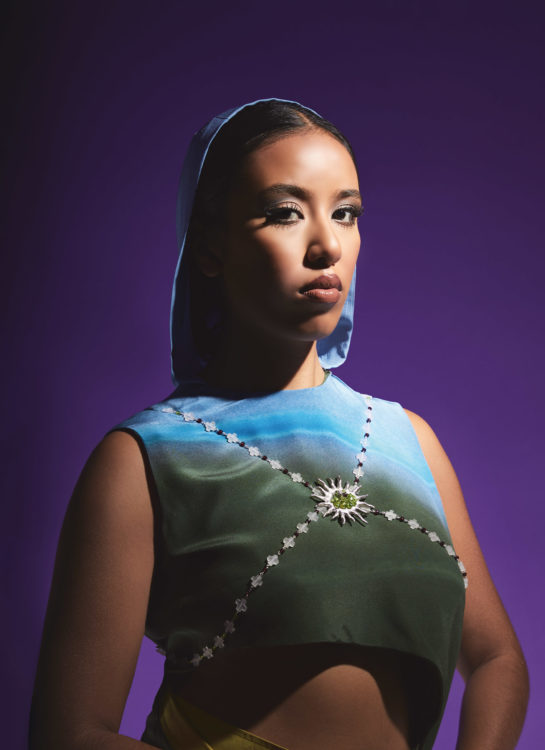 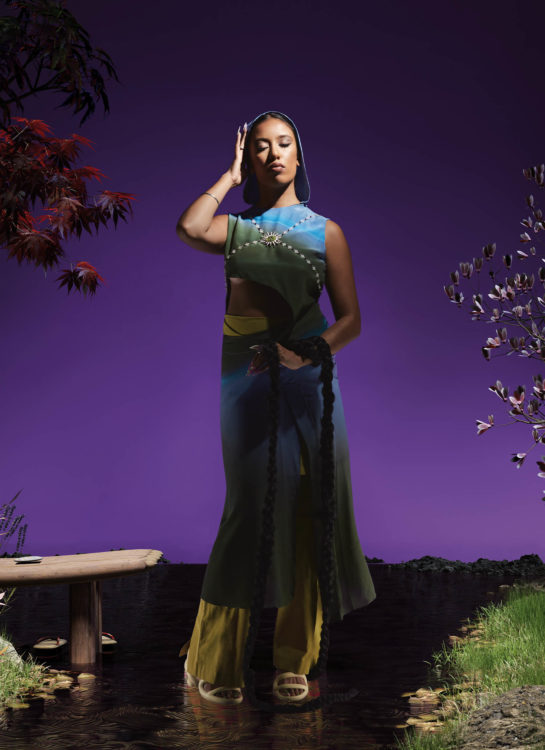 Although the single started as an ode to her boyfriend, it became much more. Following a heavy cry resulting from a fight between the two, Nayana reveals to me that the anger she was feeling was pent up from her past and not to do with her boyfriend at all. “It was about my relationship with him, but also my relationship with this country, relationships with people I grew up with, just constantly feeling detached from their little groups at school. There’s so much pain left in my body, and it just finally felt like I was releasing some of that. That was the first time that I had physically felt the feeling come through when I’m making a song.” Because of the song’s nature, Nayana didn’t want to make it sound “too perfect.”

I ask her to expand on what she means when she talks about her difficult relationship with this country. Riz Ahmed’s line, “Britain’s broken up with me,” comes to mind. “I think I just felt like I had to be white when I was a kid,” she says, a familiar story to the ears of diasporic children. “So I morphed into my surroundings. I have quite a confused relationship with this country because I do love it,” Nayana claims, “and it’s my home. But at the same time, there’s always been this feeling that I have to change myself to be accepted here. And I think, finally, I’ve just not given a fuck about that.”

Not only does Nayana’s strength lie in her vocals, but also within her creative direction and visual identity. “I have a very strong vision for each song, but sometimes it can’t work out because it’s not budget friendly!” she giggles. “But this was the first time that we were able to make it happen.” I learn that the story behind the video is a beautiful one. “It was actually based on this lady that always sits on her doorstep smoking a cigarette opposite my house. She has seen me during my most manic states: when I’ve been in love, she’s seen me be hateful, she sees me cry one day and laugh my head off the next day. So, without ever knowing me, she’s got an idea of what’s going on in my life and I wanted the video to all be through her point of view.” 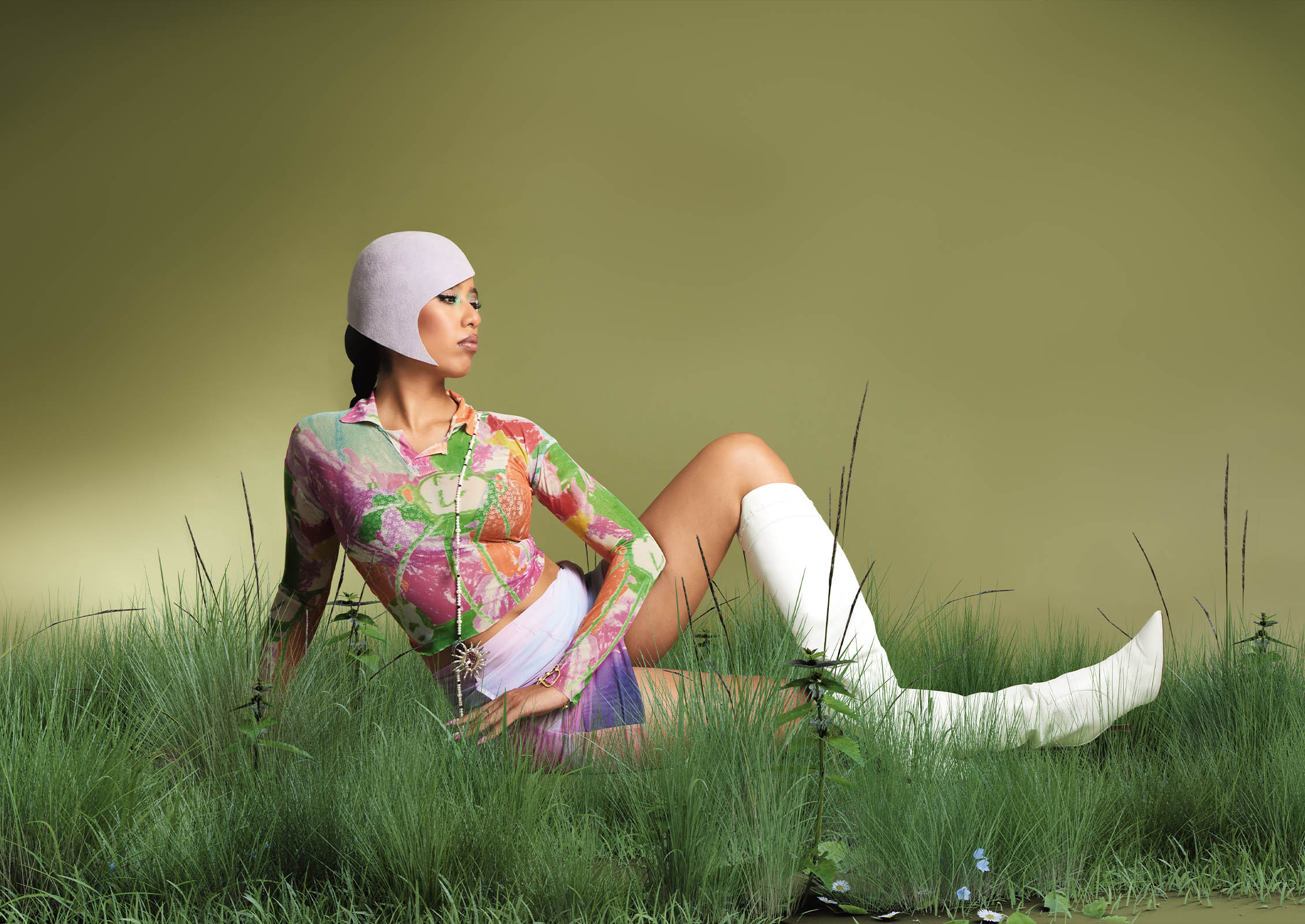 “And then at the end of the video I go to talk to her and the camera turns around and it’s just me, because it’s how I see myself. It was important that I had that part of the video because everyone thinks I’m this happy, gentle, kind person but there is a lot of pain that I’ve hidden, and I’m very good at hiding the way I feel. So I just wanted to show that deeper part of myself. Behind this smile, sometimes there’s a little pain”.

I tell Nayana that, as a performer, as an entertainer, and as a musician, she must get frustrated with having to always emit her artistic persona – “but actually you’re a human being, you’re not just a performer.”

“I love that you said that,” she says, “because it’s made to seem like one of the only ways that you can actually succeed in this industry is if you have this strong character. I know I will never be able to do that because that’s just not me and it would just look odd if I did that. I do have some videos where I’m kind of flexing, but from now on, I do want to show feeling. I don’t want my videos to be just something that will make me look good.”

Whilst we are experiencing a long overdue exposure of South Asian talent in the UK, Nayana argues that “it’s almost like we’re being hand-selected and there’s only a few of us that are getting into the forefront.” She tells me that she’s “just existing” and whilst she is a South Asian woman, she doesn’t really think about that when she’s releasing her music. “I just put my work out there, as it is.” 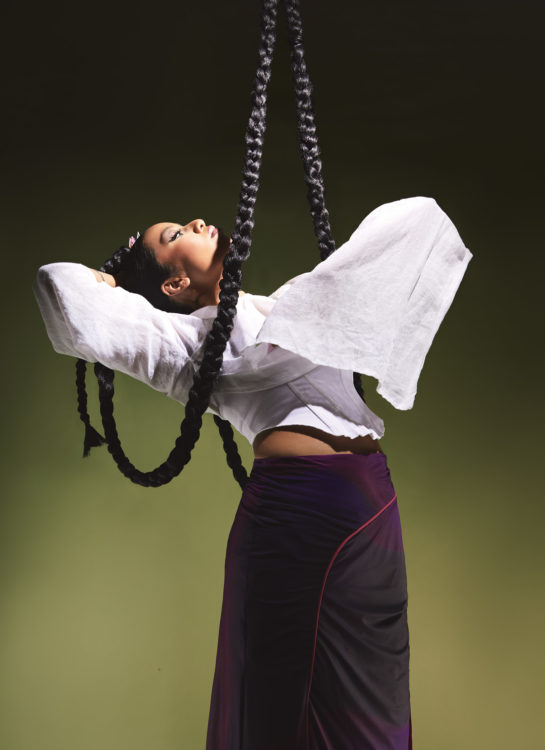 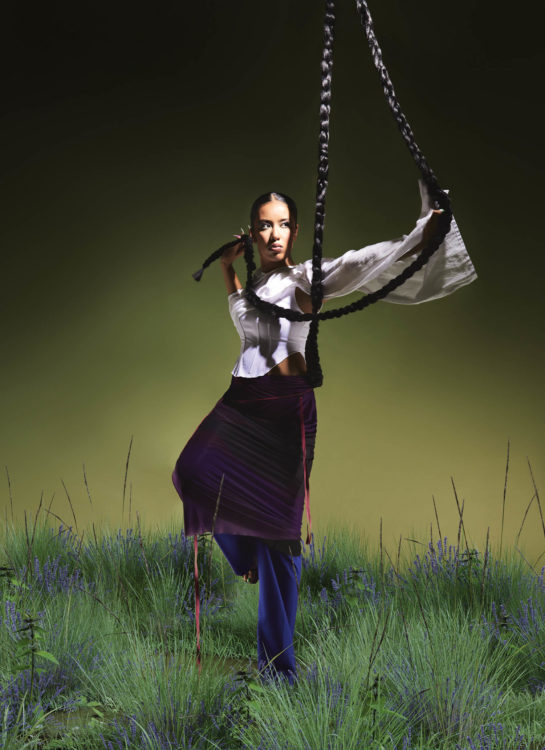 When her campaign for 2019’s “How We Do” was launched, Nayana was seeing her image plastered on the tube whilst South Asian women were telling her how powerful it was to see themselves represented in the mainstream. That’s when she realised it was important for her to express her roots. But, “I don’t want it to be a flex,” she admits. “I want it to be coming from a place that’s genuine.”

“It has taught me to be my truest self and it’s showing me that when I’m not, everything goes wrong,” Nayana explains when I ask her what the most important thing her music career has taught her so far. “And,” she continues, “it’s taught me that I can be by myself. And that I always have music. It’s taught me how to talk to my inner child, which I think has been life-changing. And being able to heal my traumas without having to actually talk about them. I think that’s the most valuable thing I’ve learned from music.” It’s not often that my interviewees thank me for asking them a question which they like, but that’s exactly what Nayana does, and these are the moments that make me fall in love with her even more. 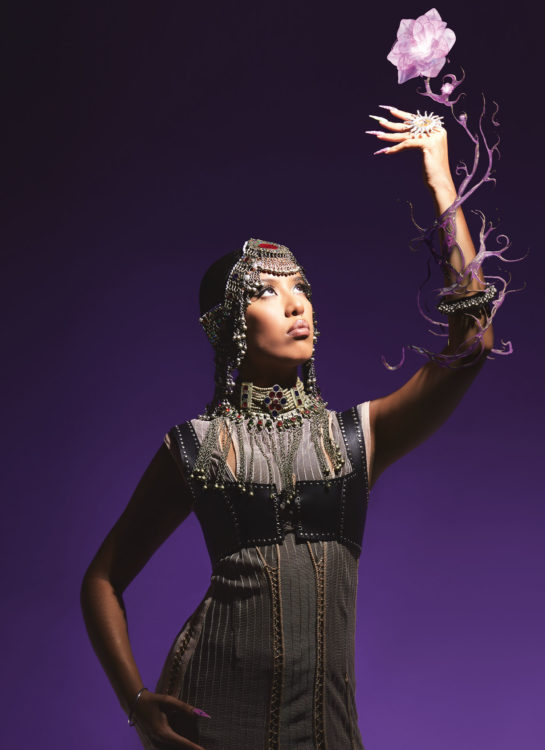 So, what can we expect from the London rapper and singer in the future? What trajectory is NAYANA IZ on?

“A lot of music. I’ve got two projects coming up. I’ll be directing a lot more videos because I wanted to work with visuals and make videos and take photos before I made music. My name means ‘eyes’ as well, so it doesn’t make sense that I don’t do any of my own videos when I have so many ideas and so many plugs. Hopefully I can go to Asia – I want to do an Asia tour! I don’t know if that’s going to happen, but I think before I do a UK tour it’d be sick if I could go to Asia. It just depends if I’m depressed or not whether I will get it all done!” – another burst of laughter.

Nayana’s humility, her hospitable aura, and her level of selfawareness all make her ‘human’ in the most literal sense of the word. She is deeply human, she’s not pretending to be infallible. This is pretty refreshing in an industry which undoubtedly thrives off imitated personas. I know I speak for more than just myself when I say that I can’t wait to watch as her ambitions and visions for the future unravel before us. 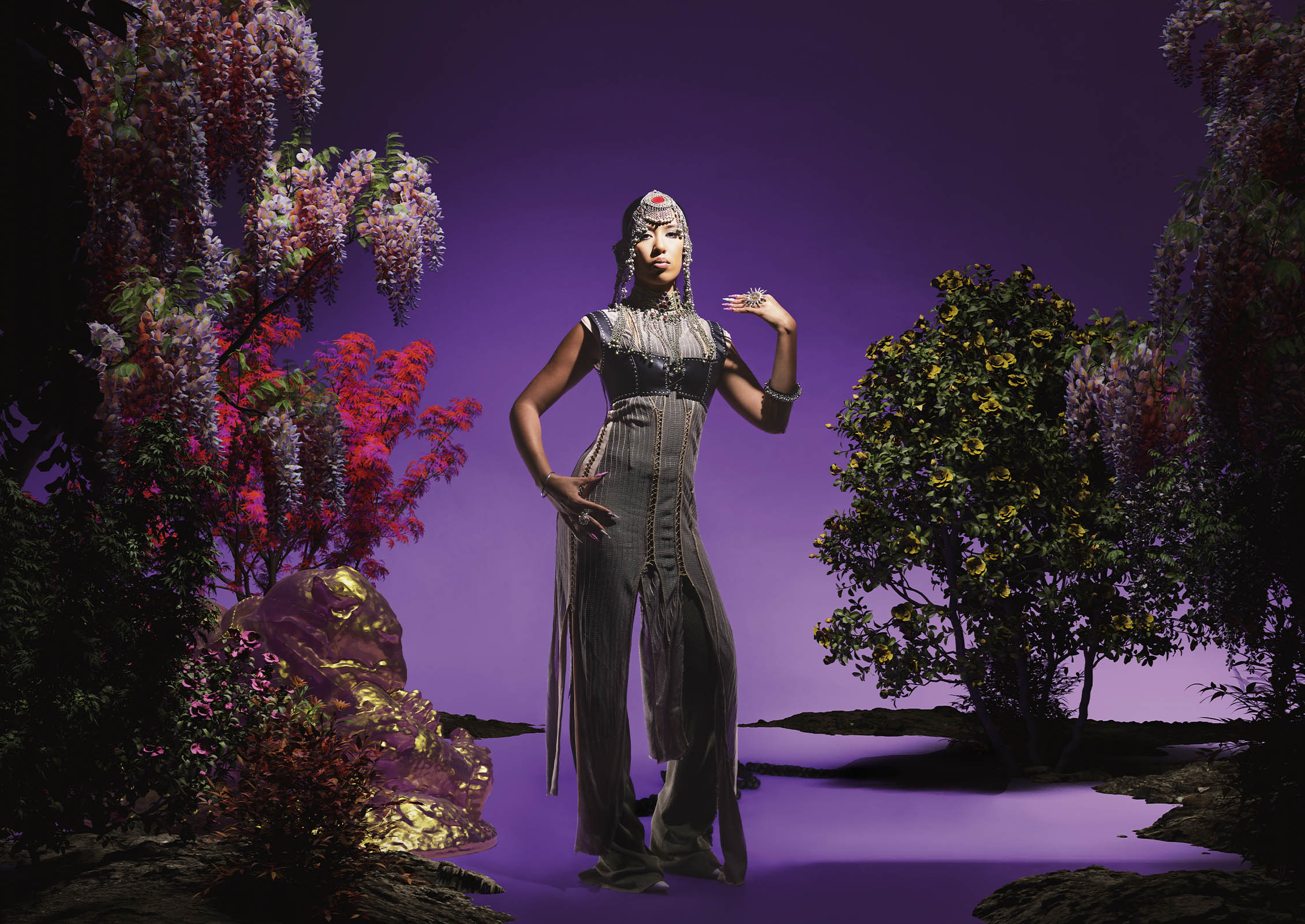