From almost calling it quits to watching a full-blown fandom emerge around their music, we dive into the creative process with MUNA as they emerge bursting with hope ready to feel the full effects of being loved.

LA-based pop masters MUNA are riding the crest of a wave right now – the independent trio ditched the shackles of major label budget balancing hell for the creative freedom of Phoebe Bridgers’ Saddest Factory Records.While not entirely their decision (the band were dropped, cutting the promotional cycle of their second album Saves The World short), the MUNA we meet today have stared death in the face and come back revitalised and stronger than ever.

Their upcoming self-titled third album is an uncompromising jubilant celebration of the queer experience. Of course it’s not all plain sailing, but when lead lyricist and vocalist Katie Gavin’s stories take a turn towards introspective caverns of darkness, 80s-inspired beats throb and soaring country-influenced strings surge providing fairy dust trails of light, reminding us the only way out is through.

On “What I Want”, MUNA channels the juxtaposition of Robyn’s melancholy floorfiller “Dancing On My Own”. The club-ready anthem, ready to soundtrack ‘[dancing] in the middle of a gay bar’ is a cathartic release underpinned by propulsive synths, while Gavin pleads her demands as if making up for lost time. 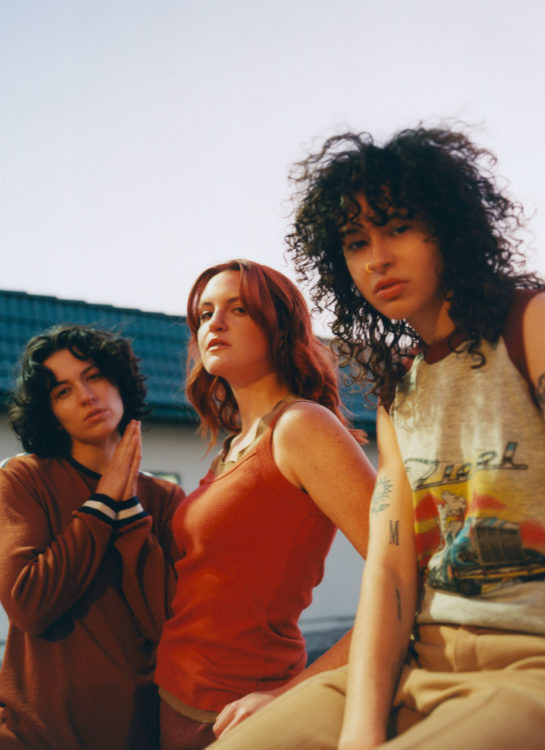 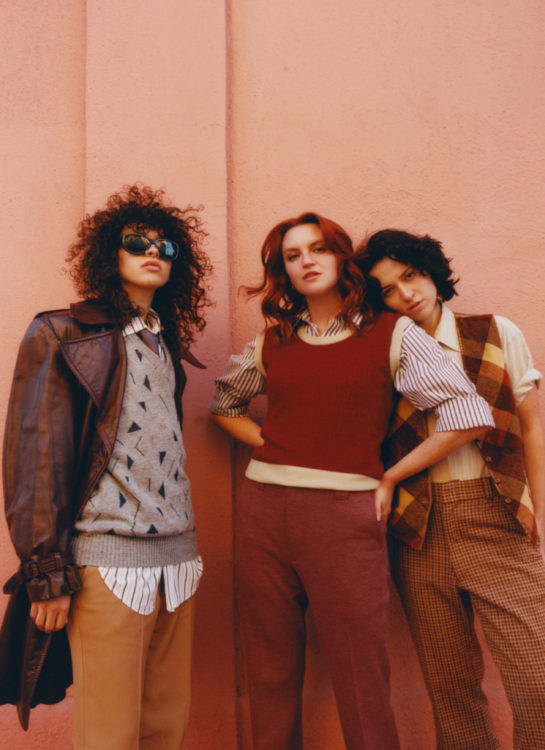 Recent single “Anything But Me” sounds like Shania Twain doing a victory lap on a unicorn (regular-sized, naturally), and with a little help from Mitski, “No Idea” hurtles towards perfection as they reference the 90s for some extra flavour. Album closers “Loose Garment” and “Shooting Star” deliver multiple emotional blows, but as Gavin explained in a tweet about the record, “this new era can feel scary [because] it’s different, [there’s] not as much pain and self-punishment,” before quickly adding “I didn’t say I was happy now did I… Let’s not get too crazy on here.”

Speaking to NOTION from their respective California homes, Gavin and bandmates / producers Naomi McPherson and Josette Maskin are recovering from their recent stint at SXSW festival in Austin, Texas, as well as North American support dates with Kacey Musgraves. It was a triumphant return to a festival that kick-started so much for these three friends. Closing their set with label boss and collaborator Bridgers on stage to perform “Silk Chiffon”, the band’s biggest breakthrough moment to date, we caught up with MUNA to discuss what comes next. From almost calling it quits to watching a full-blown fandom emerge around their music, we dive into the creative process with MUNA as they emerge bursting with hope ready to feel the full effects of being loved. 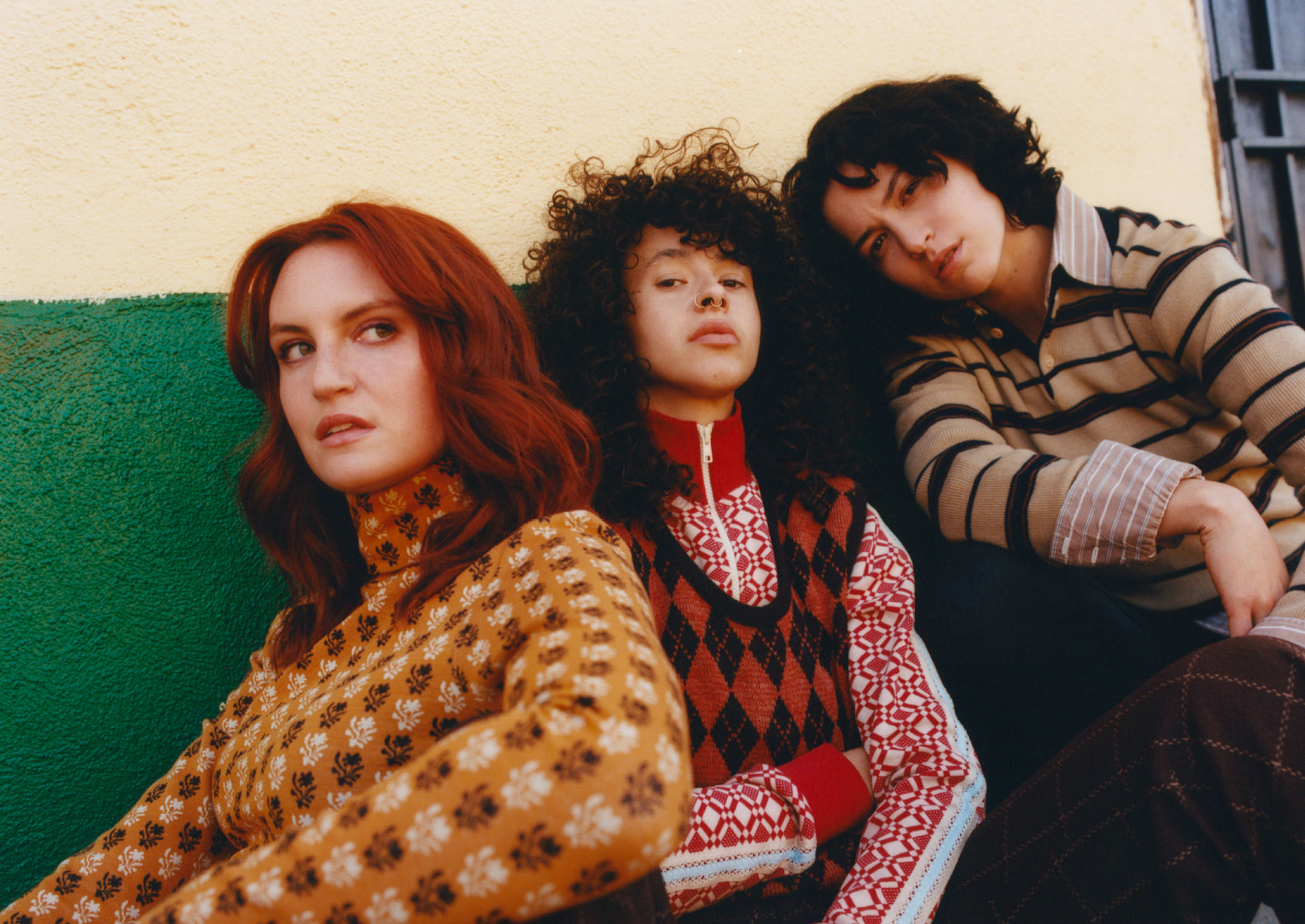 Talk to me about “Silk Chiffon”, this song is a phenomenon.

Naomi: “God bless, truly! There was something so special about that song when we first heard it from Katie and it’s so refreshing to play [live]. People are screaming the words back at you in every key you can imagine, screaming, sobbing and singing ‘life’s so fun, life’s so fun’. People, obviously, who would never wear a miniskirt in their lives are singing along. It’s just so fucking fun. This era being ushered in by that song is so apt, because I think in our personal lives we were just not wanting everything to be so fucking depressing all the time. It still can be, but I think there is a concerted effort within our little friendship to be like we should have a little bit more fun and not be too hard on ourselves.

Josette: It’s definitely trippy. It’s kind of funny, we run on these tours and people know that song, but they might not know a song from the first record. It’s interesting to see people’s reaction and it makes me feel so hopeful for our future, because obviously I love the other two records, but it is nice to know that people are getting to know MUNA at this moment. Especially on the Kacey tour, we’re in arenas and people are singing along with us. I feel really blessed. “Silk” has power, joy has power and it’s cool to see.

You’re 10 years into your friendship, what does MUNA mean to you now?

Katie: A big part about MUNA [is] we really have always considered the audience that our music is for. We see ourselves as part of this larger community and we care about people being able to use our music. We see the band as a service job, we want to be doing a service to people –whether they just want a pop banger that they can dance to, or they really want to use a song to play when they’re trying to make a different decision and change their life or get over something they’re going through.

When we started as a band, we called ourselves ‘dark pop’ and there was, and there is, a lot of darkness in the music. That was the main association with MUNA, but it’s been really interesting in this new chapter seeing our community, and the people that are using our music, associating us more and more with joy and lightness and moments of feeling free.

When I look back on baby Katie, Naomi and Jo we came on the scene like ‘Fuck everything that we’ve been through, fuck people who don’t believe in us’. I think that we’ve just been given the opportunity to grow up in this project. We’ve had an outlet for processing all these dark emotions. And it turns out that over time, that actually does transform you quite a bit. So it’s weird, because the process of being in MUNA has changed us as people, and then that changes MUNA.

Outwardly your Saves The World era looked and sounded ‘so iconic’, but you got dropped by your major label in the summer of 2020, mid-pandemic. What went wrong?

Naomi: I think we were at a place with the label where they put a certain amount of money into the project and they weren’t seeing the kind of returns they desired on a major label sort of scale. So there was a reticence to put money into things moving forward. We were [toying] with the idea of putting an EP out that year, more labour on our end rather than dwelling on the second record, which to me was kinda sad. I think that album’s fucking amazing and we knew the music was really good, but there was this cognitive dissonance as to why it wasn’t, quote, ‘working’, even though it was working in so many ways. 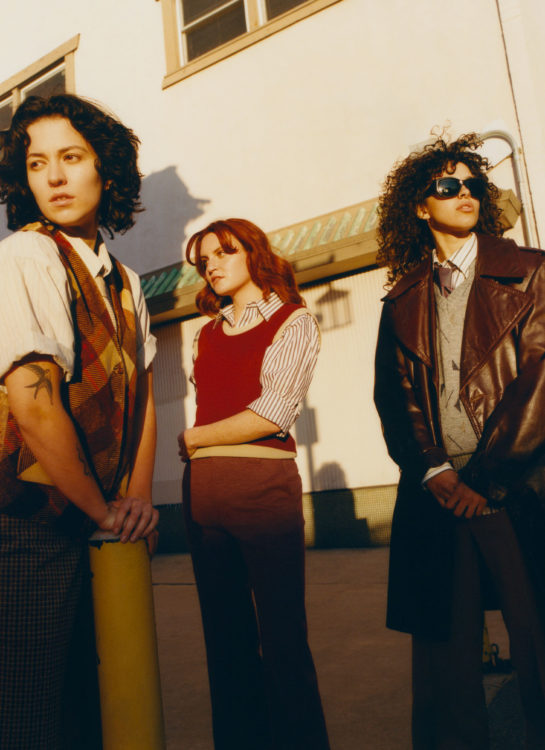 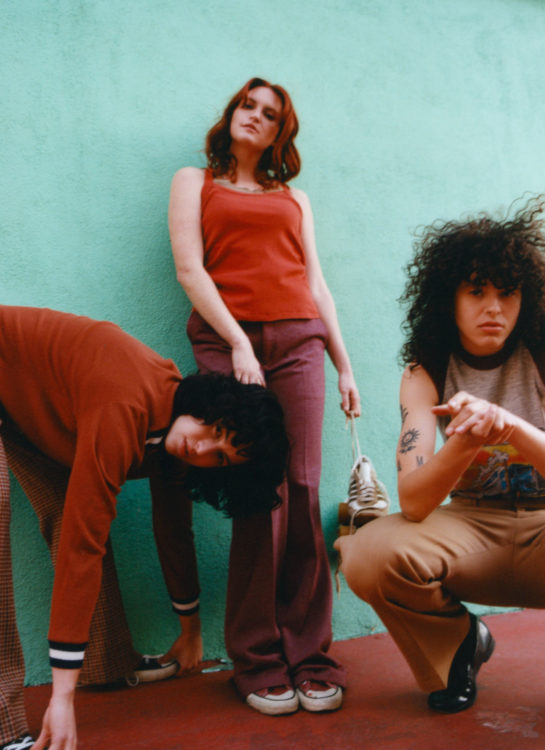 Was there a moment when you thought; this is it, the band is over?

Josette: Around the time we got dropped we were doing a sort of renewal of the vows with the band, but there was a time that we were going to quit. When you get fucking dropped and it’s the end of the world, everyone’s having these hard conversations, with themselves and with the people in their lives, because there was time to reflect. I think it showed the meaningless abyss of the world and what makes your life meaningful. And we chose to keep going, we never gave up. I feel like we can’t quit on each other.

Katie: I was going to be an organic farmer, I was having some crazy thoughts. At the same time, with the renewal of the vows, we were having conversations about how we were going to continue to collaborate together in a way that was fulfilling for everybody. All of a sudden, this thing that had worked for so long looked like it wasn’t going to work anymore. I had this feeling [that] this is the most meaningful thing in my life, partially because of everything that we’ve built up until this point. And also because I am a songwriter and I still have things that I want to express and I want to express it through them. Maybe that will be a journey one day down the line, but I hope that we can open a bakery, and I can be an organic farmer, and we’ll still do it under the MUNA umbrella.

The second track on the album, “What I Want”, is a real standout moment. You must be excited for people to hear this one.

Naomi: It has this sort of dark track – I was going to say sinister, but I think it’s maybe a little more mischievous. It has an edge and an urgency to it that’s not just pillowy, pretty pop music. It’ll still hit you over the head with a frying pan.

Katie: It’s so cool to think about it because I don’t think I could have written that song when we first started the band. I think it’s funny because our first album is so full of desire. Even if you think about “End Of Desire,” I hadn’t really made friends with my wanting, and I still had a lot of shame around it. I’ve learned over the years that it’s okay to acknowledge your wants, that’s very human, and it’s okay to celebrate that. Naomi and Jo could tell you that there’s still something scary for me about making a song like this, and I was trepidatious almost every step of the way. I was in the vocal booth like, ‘I don’t know, guys…’

Naomi: But that’s why you came on that bitch mad as hell. It’s an Olympic vocal take.

Josette: This song is the MUNA Olympics.

Katie: There’s been a song on every record we’ve written, and I can’t actually sing that song yet. On Saves The World it was “Stayaway”. My singing voice has changed; I have to learn how to sing it and I become this larger version of myself to meet the song. And that is really challenging and fun.

Away from the bangers on the album, there are still a lot of sadder, more sombre moments, but nothing ever feels wholly sad.

Naomi: We’ve talked about it a little bit, and it does seem like even though there are sad songs on this album, they’re not filled with the same kind of yearning for another person. It’s more like, ‘I am sad, but I have changed’. 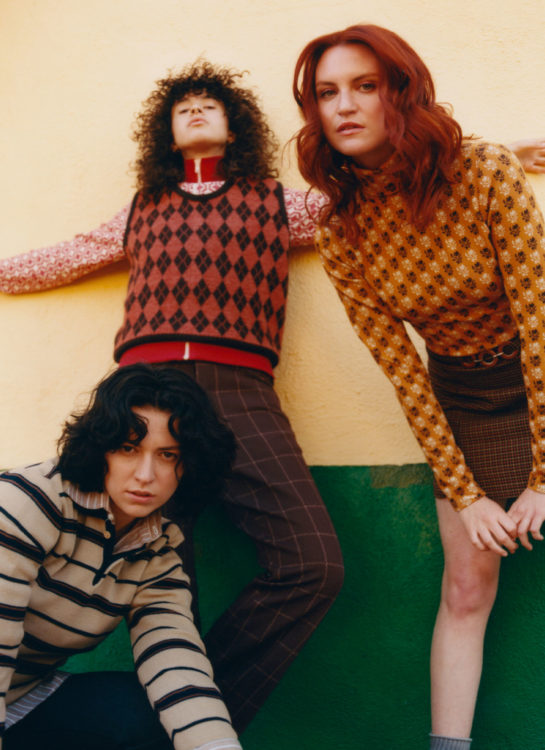 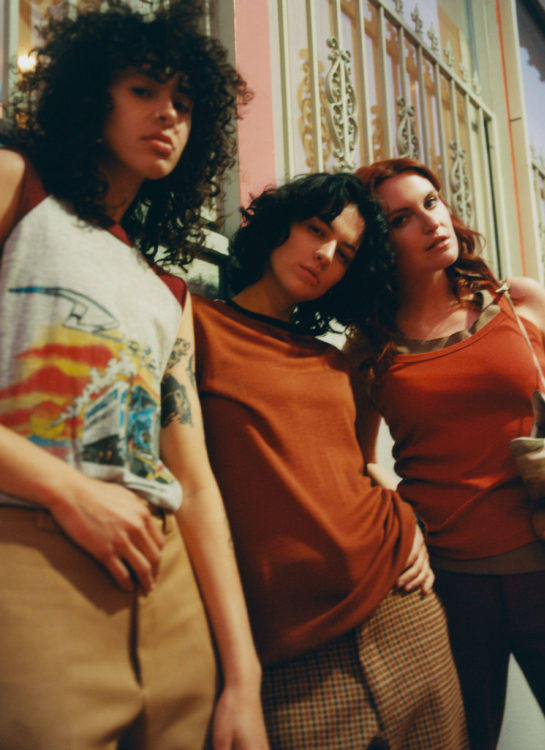 The album is your most sonically diverse record to date, are there any themes that tie the record together?

Katie: “I saw something the other day that I thought was really astute from a fan, given we only have two songs out for this record. There’s a line in “Silk” – ‘if it feels good to me, why wouldn’t it be’ –  and in “Anything But Me” – ‘I don’t want to stick around when trying to work it out when everything feels wrong’ – and like I liked that they pulled those two together, because it just made me think about how there is a trust and acceptance on this record of whatever it is that you’re feeling in your body.

That’s not something that I’ve really always had possession of and it’s something that I still work on. I think you can hear that in certain songs, like “Runner’s High” or “Home By Now”. There are these moments of self-doubt: ‘I think this is like the right thing, but I don’t really know?’ Because it’s really scary to trust yourself.

I think this record is depicting coming into ownership of one’s own experience in life and coming into this sense of agency that helps you live your best fucking life. It’s a theme that is kind of slippery because it looks so different in different situations… But maybe that’s why the record is so sprawling sonically. 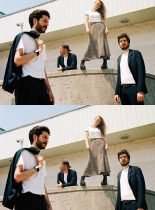 What better way to start your day off than this feel-good and enigmatic remix of Dizzy's stellar track 'Sunflower' by the wonderful MUNA? That's right, there isn't a better way!