What Went Down at the Savage x Fenty Show

Rihanna’s Savage x Fenty Vol. 4 showcase just hit our screens, and from celebrity appearances to the hottest looks, we round-up went down.

Now in its fourth-consecutive year, Volume 4 of the Savage x Fenty Showcase was staged in California this week, featuring a new all-star line-up. While a certain celebrity guest has been making headlines for a controversial appearance, the rest of the show featured very high production values, feature-film-worthy group dance routines and some slick musical performances.

Continuing to challenge convention in a commitment to diversity and inclusivity, as reflected by this year’s casting, the newest Savage x Fenty looks were set against a dark and dramatic backdrop – filmed on an actual mountain in the dark. Available to stream on Amazon Video as of last night, here’s what went down.

Entering at the top of the show in a boudoir-meets-Bridgerton masquerade ensemble, Rihanna showed her upcoming guests how it’s done. Wearing full Savage X Fenty (of course), with a new Ri-Ri track released this week it’s all coming at once after her hiatus from the spotlight.

A post shared by SAVAGE X FENTY BY RIHANNA (@savagexfenty)

There Were Supermodels Galore

Aside from Miss Rihanna herself, the showcase was not shy of some supermodels. Cara Delevingne made a notable appearance, alongside fellow VS angels Joan Smalls and  Irina Shayk. An Instagram comment says it better than we can: “Growing up I used to dream of walking the runway for VS and now that I’m grown, I dream of walking the Savage x Fenty show”.

Think Stomp, or West Side Story, but in an atmospherically dark forest, and with slightly more lingerie. To the credit of New Zealand choreographer Parris Goebel, the dance-brains behind the elaborate operation, it’s worth giving the show a watch for the synchro-dance numbers alone.

A post shared by SAVAGE X FENTY BY RIHANNA (@savagexfenty)

Burna Boy in his PJs

Burna Boy wrapped up the musical numbers preceded by Anitta, Don Toliver and Maxwell, performing this summer’s “Last Last” followed by “It’s Plenty” from his sixth and latest studio album ‘Love, Damini’. The best part? You guessed it – his velour purple pajamas.

Promising this runway would be like nothing else, Rihanna wasn’t lying. The show is interspersed with animated features thanks to content agency Oddfellows, opening the show with a cartoon version of Ri herself, before an animated Cara Delevingne enters a tree trunk.

As modelled by YouTube personality Lilly Singh, she took to Instagram to describe her experience: “I truly have never been on a more inclusive and diverse set. Nor have I ever felt more confident in my body. Thank you for celebrating me as I am”. Standing out against the dark mountain backdrop, the yellow really did steal the show. 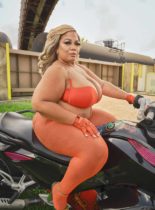 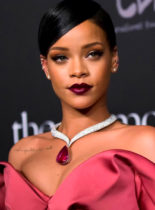