Born and raised in Hull, Chiedu Oraka’s northern roots have been integral to his music. Yorkshire slang infiltrating his irresistible tracks, from “Men Behaving Badly” to “Serve You A Taster”, the grime giant has garnered support from BBC Radio One, 1Xtra 6 Music, and Kiss FM. The fast-moving rhythms of 2018’s “Darcy” have snared Oraka over 3 million streams and the track held firm on the Grime Shutdown for over 300 days.

Oraka is by no means a one-trick pony. His “Helly Hansen” freestyles have gripped the likes of Toddla T, Tom Robinson on BBC 6 Music, Jeremiah Asimiah on BBC Radio One, Ellie Prohan on Kiss FM, and Kenny Allstar on 1Xtra. He has performed live at the 2017 BBC Big Weekender, headlined the 2019 Humberside Street Sesh, and supported Stormzy, Jaykae, Akala, Novelist, and Krs One to name a few.

The musician is also a mentor, seeking out talents such as Deezkid, Joe The Third, Jammer, Tempa T, Devilman, and Manga St with his label, Room 73, and collective, Lockdown.

This year, the Yorkshire man received the MOBO Help Musicians Fund, which rolled in alongside the second episode to his Black Kings documentary series. Oraka has big things ahead, with his latest EP ‘Ave Life’ out now, opening with a smash hit of the same name. ‘Ave Life’ is in homage to his council estate upbringing, aiming to inspire confidence in his peers who come from a similar background.

To celebrate, Oraka has exclusively chosen 10 tracks for Notion which champion the best of northern talent.

"Respect the Come Up" by Meekz

Meekz is the hardest artist in the UK right now, no discussion. He has too many top tier tracks, but this particular one is very inspirational. I love the West Coast style beat and the visual is insane.

Deeze is hands down one of the best producers in the game right now. What’s also sick about him is that he is handy with the pen too. "Clocks" is a self-reflective track where he leaves himself fully open for his fans to learn more about his upbringing and dreams.

Absolute bassline madness. The sound of the North, trust me. These two have been putting in work for years. Good to see Leeds and Sheff link up.

"Tracy TrapMan" is a certified banger. Blazer is just way too smooth with it. Very confident delivery and some very sick punchlines on this one.

Very smooth and very wavy. Love how SVMI glides on this beat. I’ve been bumping this a lot recently - one for a nice summers day, windows down, cruising through the city.

"No Favours" by NE-O

Straight up bars on this, one for the jogging playlist. I get the vibe that NE-O wanted to show the UK that there is definitely talent in the North East. He goes in!

Road rap at its best, absolute banger. Aystar never disappoints: his laid-back delivery is too much. Everything he jumps on sounds epic. He’s going back to back with a UK legend on this and that doesn’t seem to phase him. Love it.

Jheeeeez this one is too hard. F.O.S should be arrested for the way he attacked this Drill beat.  The Scunny warlord did not mess about on this track. He bodied it from start to finish.

I remember when I first heard this on the Rap Game UK final. I knew Graft was taking the title to Leeds when he spat this verse. His performance and clarity on this is crazy. I know a lot of blood, sweat and tears went into this one.

"Been A Winner" by Live Lans

Who doesn’t love a good motivational track that can get you in the mood to accomplish something great? If you’re trying to hit your PB in the gym, make sure this is blasting through your ear phones.

The Making of “North Face” with Chiedu Oraka 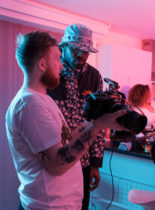 Yorkshire-rapper Chiedu Oraka takes us behind the scenes of the video shoot for his new single "North Face", out on the 4th of March.