23 year old Cuco is an LA based singer and multi-instrumentalist laying English and Spanish bars over nostalgic 808-beats. His new album ‘Fantasy Gateway’ is due this month, as the artist embarks on a tour that will take him across the US, having recently performed at Primavera Festival in Barcelona.

Citing Tame Impala as a key influence, as echoed in Cuco’s woozy soundscapes, his work has been described as a ‘melting pot’ also informed by genres from hip-hop and Latin artists to the Beatles. Since first making waves a few years ago, his new album marks a sonic evolution that even includes a collaboration with none other than Kacey Musgraves.

Having already accumulated billions of streams and a massive Instagram following, Cuco’s launched his own clothing line, and continues to champion his Mexican-American heritage through his music. To celebrate the release of ‘Fantasy Gateway’, Cuco takes us through his favourite tunes, and why they’ve earned a spot on his most-listened list. Dive in!

"Cruisin to the Park" by Durand Jones & The Indications

"I like the song because it’s a newer group tackling old sound really well. It gives a good vibe even if you're just going for a drive."

"Some Days in Time" by Muunjuun

"This song makes me feel like I’m lost in a trance. I’m also a big fan of Muunjuun’s music."

"Bones is a song I’m emotionally attached to. It reminds me of a specific time in my life when I was watching a lot of my friends play shows. It's a good nostalgia."

"I love the chords. This song makes me feel like I’m in a movie."

"I like the old textures of this reggae song. It’s a good picker upper and good mind fuel to listen to this song."

"Are You a Hypnotist??" by The Flaming Lips

"It’s a dope psych song that has a cuteness to it that I’ve always loved. I still have never seen this song live, but I want to."

"Eclectic Prawn" by Dumbo Gets Mad

"Makes me feel like I’m under water. It’s a slow song with high energy."

"It reminds me of being on the road before being on the tour bus, specifically driving through Nevada and seeing the small casino towns before you get to Vegas."

"The cover is what drew me to it, but the song is really good. It’s a throwback to when I used to find music in high school."

"Let Me Be the First to Know" by Rose Royce 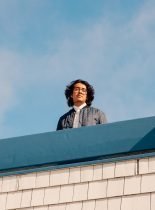 Hailing from SoCal, Cuco is the indie boy wonder crafting sun-drenched sad boy anthems that make you want to cry whilst dancing under the sun.