The founder of media empire SB.TV shares the 10Trax he has on repeat!

Jamal Edwards is someone we all look up to. After establishing SB.TV aka Smokey Barz, an online music platform when he was 15 years old, he’s been pretty much unstoppable. His ability to turn pennies to pounds, in this case a camera his parents gave him when he was 15 into a renowned brand with global reach, is something we all aspire to do.

Edwards used his environment as motivation; living on a council estate in West London meant he and his friends would often battle it out using rap to stay out of trouble. Armed with his beloved camcorder, Edwards began filming his friends and uploading their songs onto YouTube, which launched the platform SB.TV, now the home of all the best UK rap.

Still in touch with the DIY wits that inspired him to pick up a camera and film ‘smokey barz’, Edwards remains a figure that is heavily involved in the urban music scene and is responsible for documenting talent that might otherwise go ignored. His involvement in the scene has not gone unnoticed, and he was recently awarded an MBE for his services to music.

Still making moves, Edwards was last spotted at Derby with promises of ‘10 Warm Ups and a cypher coming soon’. His latest mission of finding new talent has also seen him team up with Mercedes-Benz. You can follow him on his travels his YouTube channel…

Between spins in his X Class and hunting for the next big Rap star, we grabbed a moment to sit down with Edwards and find out his go-to 10Trax.

"If You Let Me" by Sinead Harnett ft. GRADES

"This is so chill but so hype at the same time, I don't know how to explain it, the beat with Sinead's vocals is just epic."

"One of my favourite tunes from the late Cadet with Deno, it always gets me in a good mood when I'm driving about, as the boys are just having fun with it."

"Big tune with a serious message, quite emotional, a lot of truths. The piano backing with Dave's bars always hits a nerve."

"Don't You Forget About Me" by Totally Enormous Extinct Dinosaurs

"This tune every time without fail takes me on a euphoric journey. I enjoy playing this in the car to people who haven't heard it. Underrated!"

"Love what Ella Mai is bringing to R&B right now. Smashing it. This one is catchy! & whoever is in the car always seem to know this one haha."

"Classic. You can't beat it. One of the first songs I remember listening to line by line, pausing it at the end of every line and writing it down to memorise it lol."

"I always do a little dance in the car when this comes on my playlist. Deep House remix style! Banger."

"Doing It" by AJ Tracey

"On The Corner" by Tiny Boost

"This is fresh, love Aitch's laid-back swag on this one. Rhyming patterns/flows are a maze!"

The Everlasting Impact and Influence of Jamal Edwards MBE 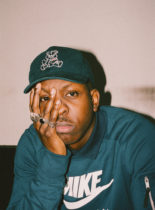 As SB.TV founder Jamal Edwards MBE tragically passes away, Notion looks back on his everlasting impact on the music industry