James Vickery picks 10Trax that unveil the inspiration behind his debut album 'Songs That Made Me Feel'.

Somewhere in the stretch between R&B and jazz, James Vickery is owning a unique corner. Born deaf in his left ear, it was through speech therapy that he discovered his singing voice. With his versatile sound, Vickery has been outlined as one of the UK’s most exciting artists to watch.

Now, Vickery is gearing up to drop his debut album, ‘Songs That Made Me Feel’, capturing the emotional rollercoaster of lockdown and his most recent relationships. “Finally” is the latest release welcoming in the full album, and Vickery has described it as the “missing piece” to bring the singles together.

The South Londoner can also hook a crowd; Vickery has headlined at The Jazz Café, The Echo in LA, and Rough Trade in NYC. Hitting Glastonbury, MELT Festival, and Java Jazz, he has already enchanted audiences at festivals worldwide. It has recently been announced that Vickery will be making a much-hyped performance at London’s Lafayette on Thursday 7th October.

In anticipation of ‘Songs That Made Me Feel’, James Vickery has exclusively picked 10 tracks for Notion that reveal the inspiration behind the album. Jump in!

"In The Midst Of It All" by Tom Misch

(Inspired "Rather Be", produced by Jack Dine.) I've always loved the overly dramatic intro of this song, I knew I wanted to open my album with something like this to really over-indulge the emotion before a surprise drop that no one expects to take us into the album.

"How Deep Is Your Love" by Bee Gees

(Inspired "Come to Me" with Music Soulchild.) I wanted something that felt completely nostalgic and it's no shock that I was deeply listening to the Bee Gees while writing this. Notice how the harmony "ahs" in the intro and verses set the tone for the rest of the song? I loved that and definitely wanted to do something similar in my song.

"Don't Let Me Down" by Sabrina Claudio, ft. Khalid

(Inspired "Hourglass", produced by Stint, Louis Mattrs.) I loved the fact this song has four to the floor drums, but still felt super R&B and atmospheric throughout, and not like a dance song at all, I enlisted the same producer to use his technique on this to replicate the same idea.

"Untitled (How Does It Feel)" by D'Angelo

(Inspired "Until Morning", produced by Louis Mattrs.) Bedroom R&B at its finest. Slow, seductive and intimate.

"Yours" by SG Lewis

(Inspired "Finally", produced by SG Lewis.) I needed something electronically charged on the album but still with a soulful lead. I always loved how the sub bass comes in on the drop, it's super "early James Blake-esque" and I love it.

"Slow Down" by Mac Ayres

(Inspired "Streetlights", produced by Jack Dine, Rob Araujo.) The piano leads the song and it's accompanied by sparse instruments with groove feels throughout. The whole Mac catalogue inspired this song, the jazz influenced piano especially.

(Inspired "All That I Am", produced by Pomo.) These guys are my heroes. Arguably my favourite song on the album too. A slow, harmony driven 90s jam with beautiful lyrics is exactly what I was going for on this one.

"I Wish I Missed My Ex" by Mahalia

(Inspired "You Comfort Me", ft. Earthgang.) This song always made me feel so happy. I don't know if it's the call and response backing vocal, the bass and drum groove throughout, or the fact it's a British R&B artist absolutely killing this sound. Either way I took huge amounts of inspiration from Mahalia's writing and delivery in this.

(Inspired "Somewhere, Out There", produced by Maths Time Joy.) I always feel like if I want to capture an emotion perfectly I go to DC. His vocals are so forefront throughout all of his work and I always try to emulate that.

(Inspired "Save You", produced by Jordon Manswell, Duncan Boyce.) The slow build. The gospel piano leading the song. This song (and album) changed my life and was so pivotal in making the proudest song I've ever written.

Stream 'Songs That Made Me Feel' below: 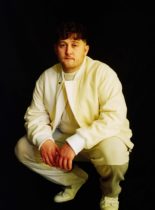 South London singer-songwriter James Vickery is the new face of UK R&B. He tells us about his musical firsts.