Producer, songwriter and DJ icon, Jodie Harsh, recruits 61 British drag queens for her "My House" music video, and picks 10Trax she can't wait to hear on the dancefloor.

Known for her trademark blonde beehive and thumping DJ sets at clubs, festivals and A-List parties, Jodie Harsh is the reigning queen supreme of nightlife.

Harsh’s influence stem from disco, early 90’s house music and the Vouge Ball scene. Beyonce, Fergie, Cher and Justin Timberlake have had the Harsh treatment on remixes, which include 3 US Billboard Dance Chart No.1’s and not to account Jodie’s numerous writing and production credits with artists from Charli XCX to Example.

For her latest feelgood track, “My House”, Jodie recruited a whopping total of 61 drag queens from the UK scene. Jodie explains: “I wanted to get the whole British drag queen community together in one video as it’s never really been done before…Of course, loads of the girls from the first two seasons of Drag Race UK are in there. I also wanted to feature queens from all corners of the UK, such as trans icon queen Juno Birch, bio queens Tete Bang and Heather Duster, and queen of transformations Charity Kase”.

As the UK prepares to ease from a year of lockdowns, Jodie Harsh also announced her triumphant return to nightlife with a second evening of her socially distanced ‘Harsh House Party’ on 21st April at London’s Night Tales, after her 22nd April show sold out instantly.

Now, Jodie has picked 10Trax that she wants to hear on the dancefloor when the UK opens it’s bars and nightclubs once more. Turn it up!

"Roisin is queen of the dance floor and her album Roisin Machine was absolute feast of sweaty, euphoric nights out. I love the way she approaches dance music and the songs she weaves around the disco bass-lines and strings. The live orchestral elements in this create the most amazing textures."

"Get me on a plane to Ibiza and let me hear this in the sunshine. Proper classic vibes, the original came out in 2003 and Riva's rework brings it slap bang up to date. I love the little piano melody, so cute!"

'Looking For Me - Skream Remix' by Paul Woolford, Diplo and Kareen Lomax

"This bass-line is off the scale! Feels like an 80's movie scene. Some lovely synths are thrown in the mix, and there's tons of 909 action which I'm always a fan of. I want this fucking loud on a dance floor PLEASE."

'Disco Hearts' by Illyus and Barrientos

"These guys make the most fire dance bangers. This one is no exception! Big vocal, big bass-line, sounds like a big night out."

"Obviously the Gays™ being robbed of hearing Chromatica played out last summer was a tragedy like no other, but I'm holding out for a dance floor moment with the Honey re-rub of this diva anthem. It's packed with interesting drums and percussions, a very cool way to approach a remix."

"The very last night out I had before lockdown was a secret DJ set by the Martinez Brothers at a hotel in London so it's only right they're played at my fantasy post-pan rave. This record is just mad drums and sampled vocals, really tribal house sounding."

"A bonkers track. Filtered disco house madness. Sounds like my kind of night out."

"Jessie's disco influenced album was a highlight of 2020. This remix sounds like Moroder and Donna Summer at their best."

"Armand is my DJ hero and this house track slaps really hard. Mad synths and choppy vocal effects, a little orgasm in my ears."

'My House' by Jodie Harsh

"Of course I have to include this! It's my little lockdown anthem and I feel like it's going to keep on living once we're free. I wanted to release something that says no matter where you're from or who you are, you're welcome at the party." 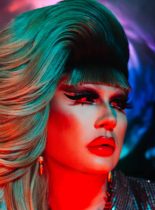