‘The Drama’ by Scorcher

Only an emcee of Scorcher’s calibre could pull in this many big names for an album. Heavy hitters such as D Double E and Tion Wayne guest feature on tracks “Jurgen” and “Ops” respectively. Elsewhere, rising artists such as Izzie Gibbs and Akele lend a hand. It’s a who’s who of those to know in the UK rap scene right now, and Scorcher has stayed true to his name by creating a record that’s hot to the touch.

Flexing his pen game, bouncy flow and undeniable charisma, Scorcher has effortlessly fused legendary tap talent with fast ascenders on ‘The Drama’. Such is the album a handbook of names to know, that only the album’s eponymous single is feature-free.

‘The Drama’ adds yet another string to Scorcher’s bow, ending his year on a high. A model, rapper, and actor, he has previously featured in TV shows Top Boy, The Intent, Mangrove, Offender, and Comedy Central’s Drunk History: Black Stories. Since debuting in 2007, he’s showing everyone that he’s still always on the up.

Stream the album below: 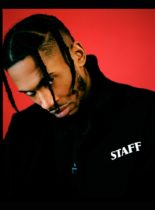