YEEZY x Gap Was the Most Hyped Collab this Year

YEEZY's covetable collaboration with Gap came up trumps this year as the most-hyped fashion link up, according to Lyst.

Lyst’s ‘the Year in Fashion’ report saw the continued rise of movements such as genderless and conscious clothing, as people swapped 2020’s comfort loungewear for bright-coloured ‘Dopamine Dressing’. Cultural moments such as the September release of Squid Game are included on the list, documenting the spike in global searches for tracksuits (+97%) and white slip-on sneakers (+145%).

In terms of collaborations, Teflar x UGG made the shortlist, after the pre-sale sold out within 24 hours, nine months before its official release. The high-end collaboration between historic fashion houses Balenciaga and Gucci also got a mention after this year’s debut, alongside Ivy Park x Adidas. Coming in hottest, however, was the hugely anticipated YEEZY x Gap launch.

When the partnership was revealed in early June, searches for both brands increased by over 300%. The Blue Round Jacket was the first product released, followed by a 100% cotton double-layered jumper tipped by many as the ‘perfect hoodie’. Kanye’s hoodie has since become one of the most traded streetwear items on resale site StockX. 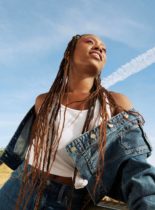 For the duration of June, Gap will be spotlighting six individuals to welcome in Pride month and launch their new collection.