Starting his musical journey as a choir boy, Bronsen Vidas’ love for music flourished when he received his first bass guitar at eight years old. The internet introduced him to a kaleidoscope of genres, from soul, Brazilian jazz, beach pop to EDM. Fast forward to today, Bronsen Vidas beguils with his untethered approach to genre, creating music that melds jazz, R&B and indie-pop – infused with his laid-back Californian vibe.

Following the release of his singles “Chamomile” and “Killing Time”, Vidas’ is back with “You’re Just a Daydream”. A dynamic nostalgic instrumental immediately gets you hooked, while Vidas’ signature silky vocals take centre stage.

Speaking on the track, Bronsen explains: ‘I thought I had been over her for a long time, but she continued to appear in my dreams. I wanted to make this song as dramatic as possible in an attempt to mockingly reflect on old feelings for a lost love, and instruments can be heard playing musical tag throughout in a playful mix of R&B, Indie Pop, and 80’s Rock.’

Stream the song below: 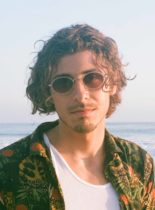